Shortly after the first James Bond film, Dr. No, took the world by storm in 1962 – everybody and their brother tried to create their own “Super-spy” franchise. As subsequent Bond films became more fantasy driven, the plots and gadgetry more outlandish, these antecedents tried even harder to one-up the original Bond by going further into tongue-in-cheek territory. Matt Helm was a world-renowned fashion photographer who was really a secret spy; the films from the books cast a soused Dean Martin spending more time making out with women and breaking into Dino tunes than actual spy-like antics. The short-lived Flint series (Our Man Flint and In Like Flint) cast James Coburn as a superspy working for ZOWIE, an anagram much like Bond’s SPECTRE. Agent 86 on TV’s Get Smart answered a shoe-phone and entered CONTROL Headquarters through a telephone booth with a trapdoor.

But while TV and film battled it out to one-up the Bond franchise; one of the Bond producers, Harry Saltzman, decided to do his own “take-off” on Bond, going brilliantly against the grain by focusing on a protagonist who lived and worked in the mundane, drab world of espionage based in the heart of the London suburbs. Optioning the first in a series of spy novels by author Len Deighton, Saltzman even came up with the most drab name for the unnamed spy he could think of; Harry Palmer. (Legend has it Saltzman stumbled upon the name Palmer, while his soon-to-be-star accidentally mentioned “Harry” would a good boring first name for the spy; forgetting the producer shared that name.)

The first in the series, The Ipcress File, stars up-and-comer Michael Caine as a randy lad more interested in his weekly paycheck than his assignments. Wearing big, black, boxy glasses (being a “four-eyes” in the 60s was akin to social suicide), the insolent “limey” makes rude and rough advances at the ladies around him with mixed results. He lives in a small, shabby flat, although he enjoys the finer things in life (he’s a closet Gastronom, and makes his coffee every morning using this strange contraption called a French Press(!)). While the story follows a kidnapped scientist who is ransomed to the highest bidder, most of the time is spent watching the wasteful bureaucracy that is British Intelligence demanding that its agents fill out endless reams of paperwork. Caine’s Palmer does everything he can to get out of the mindless work, and although a poor example of British efficiency, he can’t help but try and solve the mystery against his better judgment. He spends an inordinate amount of time playing the politics with his current and past station chiefs. 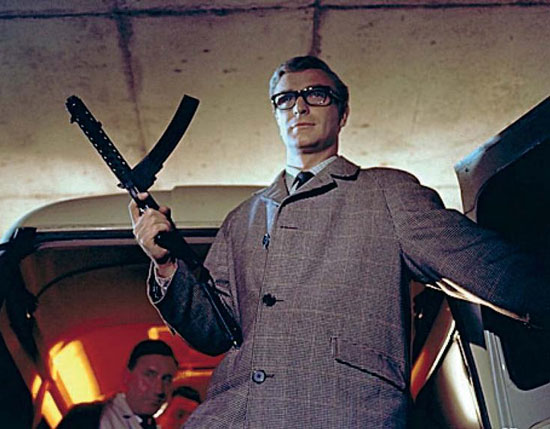 The little action there is pits Palmer against the kidnappers, not on his own, but with a fleet of agents, all assigned machine guns with disastrous results. Does this all sound like a recipe for boredom? Well, it’s anything but. The Ipcress File  is a fun and fiendish good time, made all the more charming by Caine’s shrewd performance and mundane “nerd-chic” style. In fact, Caine’s look inspired Mike Myers’ Austin Powers; to the point of giving a cameo tip of the hat to Caine as the same bespeckled agent in Goldmember.

Another of the many joys of The Ipcress File is the soundtrack by none-other-than ubiquitous Bond composer John Barry, who finds an ingenious way to lace the surf guitar synomyous with Bond in a much more subdued way, keeping the spirit of the super spy present, if not nearly as rocking. Several passages make you react with a feeling of Bond nostalgia, less able to put your finger on the precise way Barry is tickling your brain with something familiar while somehow still keeping it altogether original. 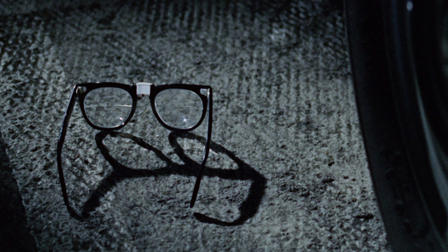 It’s a crime The Ipcress File is not better known or more available for viewing, but it’s still hard to come by in any format, let alone DVD. (I should know, it sat at the bottom of my Netflix queue as “unavailable” for three years before I gave up on it.) Thankfully, it’s on mid-level rotation on TCM, and airing this month, starting tonight.

DVR it, check it out on the WatchTCM app, or do whatever you need to do to catch the first in the series, and revel in the subtle joys of a decidedly anti-Bond, living modestly amidst the milieu of the other far-fetched super spies, who deserve much more to have fallen by the wayside than one obstinate limey named Harry Palmer.

The Ipcress File airs on Monday, January 25th at 10PM EST, Saturday March 5 at 6:00PM and continually in January on the WatchTCM App.

Before personally getting my hands on the Criterion Collection’s release of David Lynch’s debut feature film Eraserhead, I looked at some screenshot comparisons put together by the good Gary Tooze for DVDBeaver (which you can […]