In 1941, Paramount approached Max and Dave Fleischer, heads of their in-house animation production, with a proposal: to adapt the increasingly popular Superman comic book into an animated series for the big screen. But the Fleischers were reluctant. As Dave later admitted (as recounted in Les Daniels’ Superman: The Complete History), the idea of animating Superman was a daunting one: “I couldn’t figure out how to make Superman look right without spending a lot of money.” The Fleischers decided to put off Paramount by proposing an unheard-of budget of nearly $100,000 for the first cartoon–a figure that was almost quadruple the typical budget for an animated short at the time. To their utter surprise, Paramount agreed to the figure, and thus the Fleischers were on the hook for a new series.

The Superman comics–visually stunning, imaginative and creative tales of good vs. evil–were ripe for cinematic adaptation. Like many animators and artists of their generation, the creators of Superman, Jerry Siegel and Joe Shuster, had been greatly influenced by the newspaper comics from their childhoods. In a 1992 interview with the Toronto Star, Siegel credited Winsor McCay’s groundbreaking comic strip Little Nemo for “turn[ing] me on to fantasy and science fiction.” Influences from contemporary cinema also made their way into the Superman comics; indeed, many of the early elements of the Superman franchise were inspired by films: the main setting, Metropolis, was named after the 1927 Fritz Lang classic of the same name, while Superman’s alter ego was christened “Clark Kent” by combining the names of actors Clark Gable and Kent Taylor. The body model used for the muscular design of the character was largely based on actor Douglas Fairbanks, Sr., while Superman’s reporter alter ego was modeled in part after Harold Lloyd. And his erstwhile girlfriend/fellow reporter, Lois Lane, was named after actress Lola Lane, who portrayed tenacious reporter Torchy Blane in the 1938 film Torchy Blane in Panama (though Lois’s personality was based largely on actress Glenda Farrell’s memorable characterization of Torchy in seven films of the series). 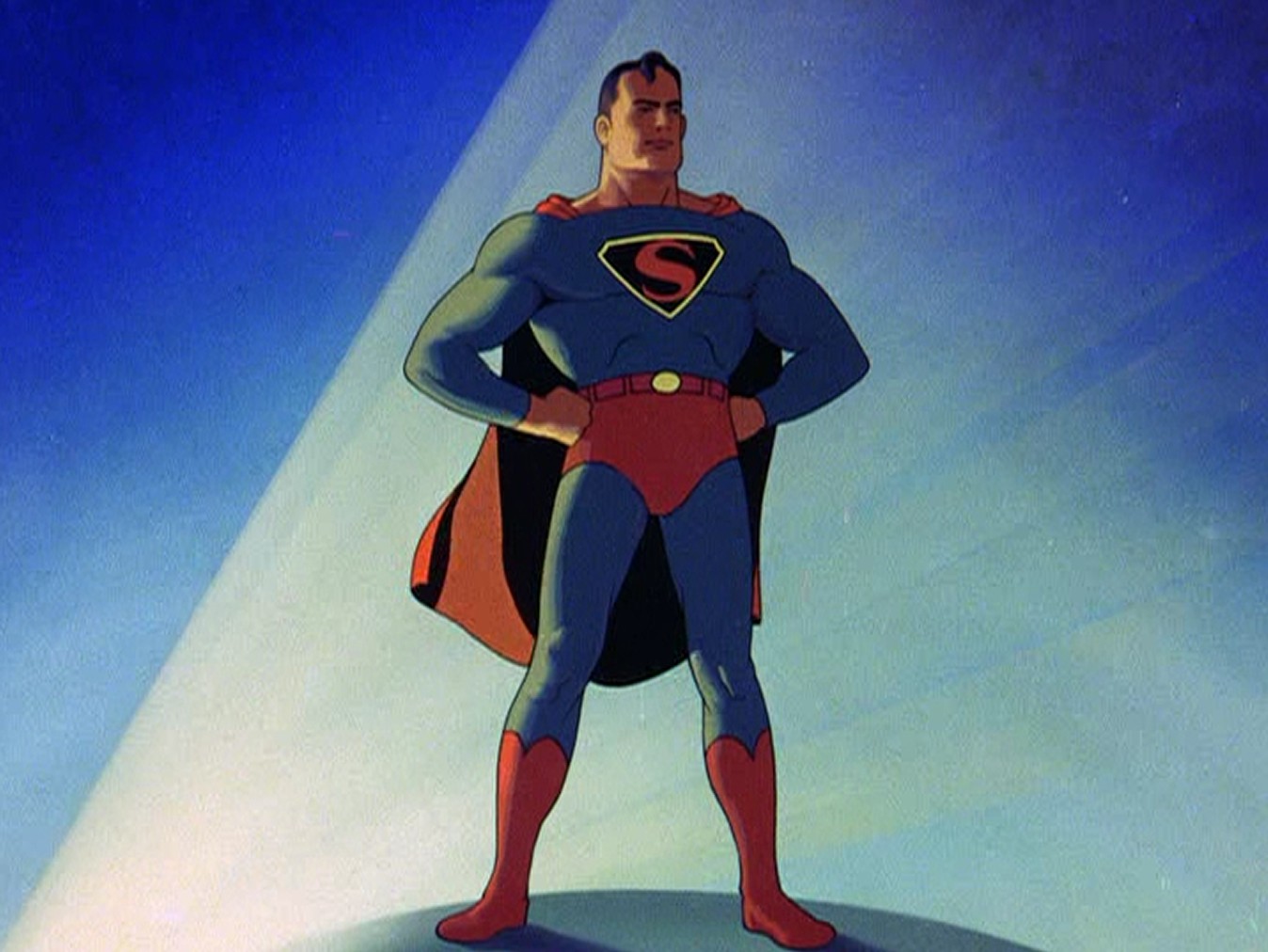 The Superman cartoons mark the Fleischers’ first attempt at a more realistic style of animation, one that was far removed from their usual type of cartoon. Compare the Superman series to the Fleischers’ other popular series, Popeye and Betty Boop, and the difference is immediately apparent. Not only are the Superman cartoons conveyed in resplendent Technicolor, but the movements depicted are less comical in nature, more attuned to actual human movement. That’s not to say that the action was entirely realistic, however; the Fleischer animators had long relied on rotoscoping to craft their human characters, and their efforts to sketch the Superman universe freehand were not quite as smooth as they may have wished. Still, every effort was made to maintain the same sense of realism that marked Superman’s comic-book world, from the depiction of the characters to the design of buildings and landscapes.

Indeed, in crafting these shorts, the Fleischers were doing things with design and color that they had never before done. The Superman cartoons represented a new level of artistry for the Fleischers that far surpassed even their double-length color Popeyes from the 1930s, not to mention the studio’s two feature-length films (1939’s Gulliver’s Travels and 1941’s Mr. Bug Goes to Town). The animators, led by Fleischer Studios veteran Seymour Kneitel, treated the creation of the Superman cartoons as if they were making a feature-length film, with full, detailed storyboards and painstaking, art deco-inspired backgrounds and designs. They utilized unique camera angles and deep shadows to create an intriguingly atmospheric universe for the series, one whose look was more akin to a painting than a mere cartoon. The stories themselves are fantastic and tightly-plotted so that the action moves along rather briskly. It’s truly remarkable to look at these cartoons today and see just how much the Fleischer studio was able to do in a mere ten minutes of screen time.

In transferring the character to the big screen, the Fleischers made some changes that soon became canon in the comic-book universe. The original print incarnation of Superman did not fly–he merely “leaped” across the landscape. But the Paramount animation team found that this method of traveling looked somewhat ludicrous when animated. The Fleischers asked DC if they could grant Superman the power to fly, and to the animators’ great relief, DC agreed. The cartoon series also originated one of the more familiar catchphrases associated with Superman: “Faster than a speeding bullet! More powerful than a locomotive! Able to leap tall buildings in a single bound!” These changes soon made their way into other Superman media, including the comic books and the popular radio adaptation.

The first cartoon in the series, simply titled Superman (sometimes subtitled The Mad Scientist), debuted on September 26, 1941. In a shrewd move, the stars of the Adventures of Superman radio serial, Bud Collyer and Joan Alexander, were cast as the voices of Superman and Lois Lane, allowing for some sense of continuity between the two incarnations of the superhero. The short opens to the stirring strains of Sammy Timberg’s Superman theme, which recurs throughout the cartoon. Though most of us today are more familiar with the iconic John Williams Superman theme (composed for the 1978 film), Timberg’s music sets just the right tone, and was in fact later adapted for use by the radio serial.

From the start, Superman was a phenomenon. Paramount put all the mightiness of its publicity machine behind the cartoon, promoting it with posters and even a trailer–rarities for a theatrical short. And it worked: the cartoon was a serious moneymaker for the studio. Superman was eventually nominated for an Academy Award for Best Short Subject, Cartoons. That year marked a crowded field in the category, with a record ten nominees, and the Fleischer cartoon eventually lost to Walt Disney’s Pluto short Lend a Paw. But the superhero’s first outing remained much more memorable in retrospect, and fifty years after its debut, Superman would be voted as the 33rd best cartoon of all time on the Jerry Beck-curated 50 Greatest Cartoons list.

For all its success, the making of Superman came at Fleischer Studios’ most trying time. After moving to a new Miami studio in the late 1930s, the Fleischers were in severe debt to Paramount, and to extricate themselves, they basically gave away their rights to their own studio, even signing resignation letters that could be used by Paramount at any time without notice. This move would come back to haunt the Fleischers, as Paramount finally ousted the brothers in 1942, renaming the studio “Famous Studios” and taking over production of all Fleischer products, including the ongoing Popeye and Superman series. 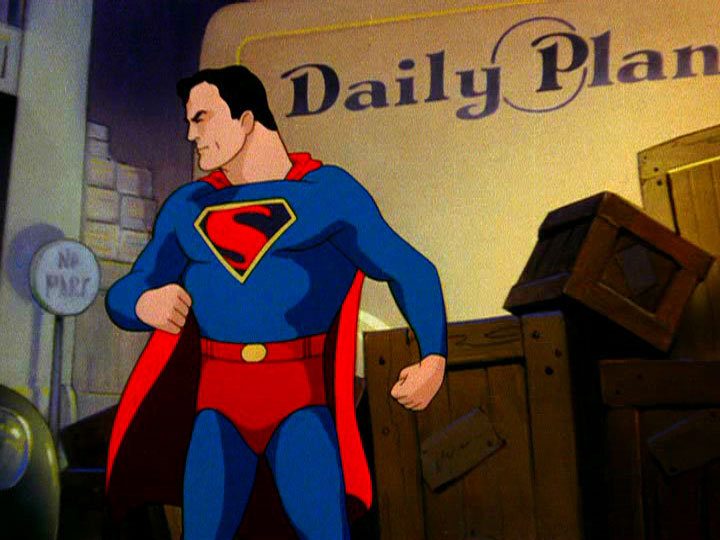 In the end, the Fleischers produced nine Superman cartoons before being removed from the studio bearing their name. With the change in management came a shift in the tone and subject matter of the Superman series. While the early cartoons had focused on sci-fi inspired stories of mad scientists and robots, for the remaining eight cartoons in the series, Famous began to focus on World War II-themed shorts, designed to propagandize the ongoing war effort. The distinctive visual style remained, but a little of the magic of the more fanciful Fleischer-directed entries in the series was gone.

More than seven decades after their initial release, the Superman cartoons remain some of the most visually-stimulating, undeniably beautiful animated shorts to emerge from the Golden Age of Hollywood animation. Their influence was wide-ranging. The dark and shadowy nature of the shorts predated the film noir movement by several years, and eventually inspired the noir-ish feel of two excellent 1990s superhero television series: Batman: The Animated Series and a revival of Superman. Artists from anime legend Hiyao Miyazaki to comic book mastermind Frank Miller (Batman: Year One) have cited the 1940s Superman shorts as influential on their work. It may have lasted just a short while, but there’s no denying that the Fleischers’ Superman series was a movement unto itself, revealing the potential for cartoons to be recognized as “art” in the truest sense.

Note: all seventeen Superman shorts from Fleischer/Famous Studios are in the public domain and can be viewed and downloaded from the Internet Archive. You can also find them on (relatively inexpensive) DVD and Blu-ray, and all of the cartoons are included in the special features of the Superman Motion Picture Anthology Blu-ray collection.

Daniels, Les. Superman: The Complete History: The Life and Times of the Man of Steel. San Francisco: Chronicle Books, 1998.

Fleischer, Richard. Out of the Inkwell: Max Fleischer and the Animation Revolution. Lexington: University Press of Kentucky, 2005.

In 2013, Disney brought their flagship character, Mickey Mouse, roaring back to animated life in a series of cartoon shorts that air intermittently between programming on the Disney Channel. These stylized cartoons are at once […]

It’s the most wonderful time of the year … time for Christmas cartoons! Each Saturday this month, we’ll be taking a fond look back at some classic holiday shenanigans from some very familiar animated folks. First up, let’s revisit the […]