If ever there was a year to be teenager, that was it. I mean, really stop and think about it. On your radio (transistors, of course) not only do you have the seismic British Invasion shaking up everything you thought you knew about popular music, but the magic that was Motown was at its absolute zenith. On movie screens, you still have your pick of wholesome big-budget Hollywood fare, like My Fair Lady, The Unsinkable Molly Brown, and Mary Poppins, but you also have the bonus of films hinting at a shift in the cultural fabric: Dr. Strangelove. A Hard Day’s Night. The Pawnbroker. Hush Hush Sweet Charlotte.

And then you have the tube.

American sitcom TV entered a true golden age that year as the Fall lineup from the major three networks introduced 10 – TEN – series that would not only be bona fide hits, but enduring classics in the lexicon of American television. The Man From U.N.C.L.E., Peyton Place, Gilligan’s Island, Gomer Pyle and Flipper all hit the small screen that season, and along with them? Three families that TV had never seen the like of before. Dabbling heavily in the occult, they were somewhat creepy, highly cooky, very mysterious, and sometimes spooky. Equipped with tons of chemistry, the ubiquitous laugh track, unabashedly light (yet highly clever) comedy, and theme songs that—50 years later – we still can’t stop humming, they took hold of the imagination of the American public and still linger there in our collective consciousness.

This time of year, it’s always fun to return to those first families of the macabre: The Addams Family, The Munsters, and Mrs. Samantha Stephens of Bewitched.

Premiering within one week of each other,  (Bewitched, on ABC, September 17, 1964; The Addams Family, on ABC, Friday September 18; and The Munsters, on CBS September 24) the series were inherently risky, yet taking full advantage of unexpected craze for all things “monster” that had infected Americans at a time when the public was falling down left and right with manias and isms of every shape and size. They were a joke on what had already become an eye-rolling cliche: the wholesome father-mother-2.5 children model of TV sitcoms that had pretty much ruled the early ‘60s (Leave it to Beaver, Father Knows Best, The Donna Reed Show, et all.).

And while it’s wise not to read too deeply into these admittedly escapist, lighter than air comedies– they were about fun not politics–it cannot escape one’s notice that it is their ‘abnormalities,’ their eccentricities, and their complete comfort with them, was a breath of fresh air.

It was OK to be different; weird. In fact … it was downright cool. 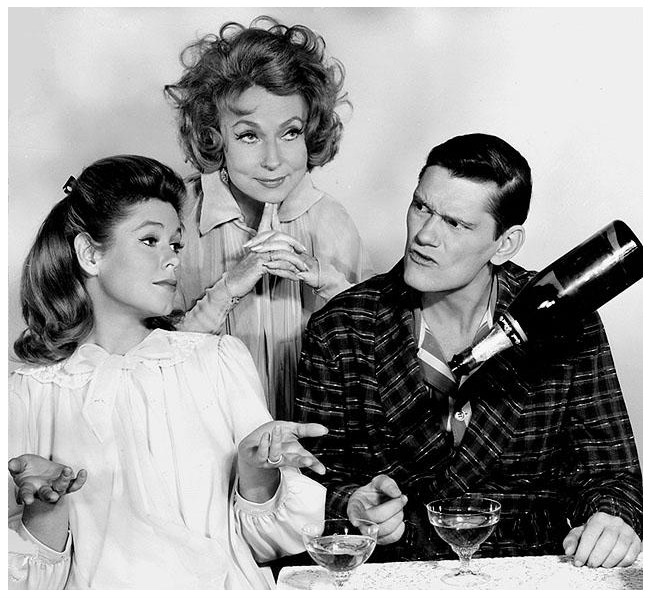 Samantha Stephens is the gorgeous, wholesome, All-American posterchild of mid-century housewife perfection. She’s proud of her husband and proud of her home … and she’s also proud of her unique heritage which stretches all the way back to…. Salem. Taking it’s cue from the comedy classic I Married a Witch (1942), starring Fredric March and Veronica Lake, Bewitched is the tale of a typical suburban housewife with cauldron-full of mischief up her sleeve. Elizabeth Montgomery’s adorably trouble-bound Samantha Stevens ran a middle class house that looked like anything you’d see in Leave it to Beaver.

But Darren and Samantha argue. And I mean argue. A. Lot. And they have troublesome in-laws who interfere with their marriage. A. Lot. (Specifically Agnes Moorehead’s mother-in-law-from-hell, Endora.)  And they’re always on the verge of accidentally exposing their black little secret to the entirely unprepared world at large. (Namely, nosey neighborhood of the year, Gladys Kravitz.) Bewitched is more obsessed with the pursuit of conformity than its fellow 1964 alumni, but when Sam is pushed too far by the mere mortals around her? That’s when the show becomes irresistible.

Watch her in action in this 1964 trailer for the new series, including a segment from the unaired Bewitched pilot. 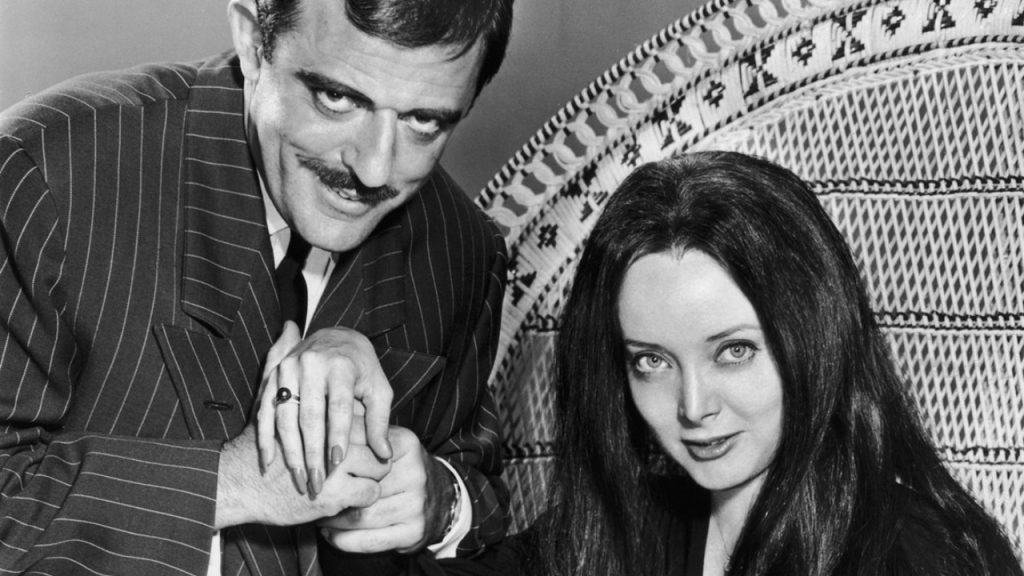 OK, so Gomez (John Astin) and Morticia Addams (Carolyn Jones) are probably the only husband and wife couple in mid ‘60s TV that had nonstop sex. NONSTOP. That kind of  ‘round the clock passion probably would have received a no-go had they been a conventional husband and wife—but there is nothing conventional about Gomez Addams nor his family. And because they “weirdoes”, and therefore have no validity as actual human beings, well … anything goes.

Adapted from Charles Addams’ popular New Yorker cartoons, their small-screen manifestations differed from their fellow 1964 alumni in that The Addams’ were openly ambivalent toward ‘regular’ society. They existed happily in their own ecosystem, inhabited by fellow anti-establishment Ghoulies, and had little stamina for the small-minded mortals they were forced to engage with on a daily basis and bore an air of aristocratic superiority. Aside from Lurch the Butler and hairy Cousin It, and Uncle Fester (Jackie Coogan–at one time the most beautiful little boy in the world), The Addams’also looked…human. Gothic and creepy, but still recognizably human. This actually makes them much more menacing than their CBS counterparts The Munsters. (Even the uber adorable little Wednesday still had a  major creep factor, later perfectly exploited to the hilt by Christina Ricci.) 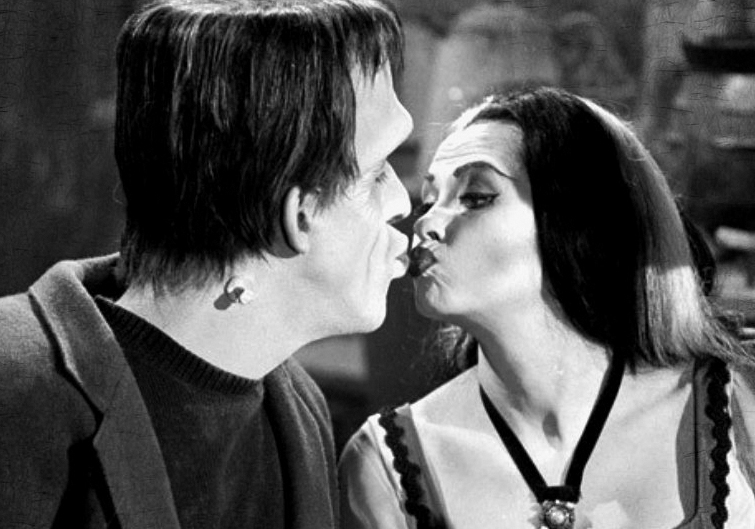 The Munsters are the most wholesome, well-adjusted, downright normal family to ever come to TV. (It’s no small coincidence that the series was created by Allan Burns and Chris Hayward, who created Leave it to Beaver.) And this is why they work. Unlike The Addams’ Family, who are keenly aware and proud of their eccentricities, harboring a disdain for all things ‘normal’, The Munsters honestly believe they are normal, and what’s more, take pride in it. (“If there’s anything I can’t stand, it’s weird people,”  says Lily in Season 1.)

Adapted liberally from Universal’s classic monsters, The Munsters, more than their fellow 1964 alums, look the part of frightening. And yet, they are the most harmless of the lot.  Lily Munster (gorgeous Yvonne De Carlo) is a Donna Reed, because she’s a damn good housewife and proud of it. So what if she’s a green vampire who sleeps in a coffin? Herman Munster (Ed Gwynn) is Robert  Young because he’s a proud breadwinner and attentive father. So what if he weighs 1 ton and has electrodes protruding from his neck? Marilyn Munster (Beverly Owen and later Pat Priest) is the ugly duckling of the family: a gorgeous blonde with a Marilyn Monroe-esque figure who longs to be as ‘beautiful’ as her Aunt Lily. If ever there was a show that put beauty conventions and conceptions of normality in their place, it’s The Munsters.

Below are all of the opening sequences used in  The Munsters’ two season run (but hey, we’re talking 40+ episodes a season here), including the mercifully canned opening for the un-aired pilot.

Sure, subsequent TV series would dig deeper (Dark Shadows, to name one of many) and become full-bodied and well-rounded, but these three sitcoms of 1964– Bewitched, The Addams Family, The Munsters– remain the hands-down, bar-none, monstrously fun first families of the macabre.

Have fun this Halloween re-visiting the creepy, cooky, altogether loveably ooky characters that we’ll take to, uh, the grave.

The Addams Family is currently available for purchase on Amazon’s Instant streaming service.

The Munsters is currently available for streaming on Netflix.

Monstravaganza: The Simpsons’ Treehouse of Horror: A Personal Top Ten

This year marks the twenty-fifth (!!) anniversary of The Simpsons’ annual Halloween tradition, the Treehouse of Horror. And today, FXX (now home to Every.Simpsons.Ever.) will air every.Treehouse.ever back-to-back in an epic marathon. (But don’t worry […]

When I was a freshman in high school, I had my first real boyfriend. Oh, how madly in love we were…until he forgot to give me a Valentine’s Day gift. Heartless bastard. And I let […]