A rebellious princess falls in love with an orphaned petty thief on the streets of an Arabian kingdom. She is fifteen, going on sixteen, and at the insistence of her father–and the laws of the land–soon must be married to a random prince in order to secure the kingdom’s future. As for the thief, it’s all he can do to feed himself and his mischievous monkey, while he dreams of a better life. In their midst, a scheming grand vizier plots to overtake the kingdom for himself, with the help of a magical lamp hidden in a sandy cave shaped like a tiger’s head, which only a “diamond in the rough” can access. But if that won’t work, he’ll settle for manipulating the sultan into giving him his young daughter’s hand in marriage.

You know, the same old story. 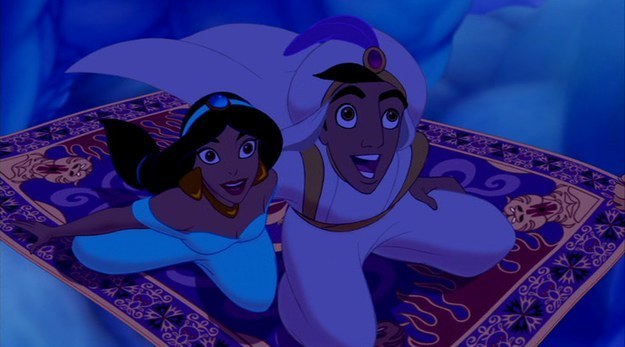 The fourth film released during the Disney studio’s storied “Renaissance” of the 1990s, Aladdin is loosely adapted from the story of Aladdin in the folk tale collection One Thousand and One Nights (commonly referred to as Arabian Nights, a title which lent itself to the opening tune of the film). Aladdin debuted in theaters in 1992, one year after the unprecedented success of Beauty and the Beast. That critical darling of a film–a two-time Academy Award-winner for Best Original Song and Best Original Score, also holding the distinction of being the first animated feature nominated for the Best Picture Academy Award–left some huge shoes to fill. To do so, they turned to some of the same talents who crafted Beast, including musical guru Alan Menken and lyricists Howard Ashman and Tim Rice (who took over after Ashman’s death in 1991).

Upon its release, Aladdin was a smash hit with audiences, and the film received much critical praise, though it was somewhat muted in comparison to the untold accolades that Beauty and the Beast had garnered the previous year (like that film, Aladdin would go on to win Academy Awards for Best Song–for “A Whole New World”–and Best Score). And while Aladdin is not quite as lush and romantic as its predecessor, the movie boasts its own particular charms. It’s like an animated throwback to both the swashbuckling pictures of the Golden Age of Hollywood (with a protagonist whose derring-do and passion are reminiscent of Douglas Fairbanks, Jr. and his ilk) and the glory days of the Tinseltown musical (courtesy of a dazzling soundtrack comprised of some of the most memorable tunes of the Disney Renaissance era).

Much of the success of Aladdin has been credited to the performance of the late Robin Williams as the Genie, and it’s no surprise, because he clearly dominates the film–and it is the very definition of a dynamic (some might say “manic”) performance. When Williams signed on to the cast (having been convinced to do so when artists animated the Genie character to one of his stand-up routines, showing him the hilarious potential of the role), he was essentially given carte blanche in the recording studio, and the actor–well, he basically went nuts, in the very best way. His Genie is by turns wild and heartfelt, always brimming with emotion. Admittedly, at times, it feels as though the actor relies overmuch on celebrity impersonation (seriously, how DOES the Genie–who’s been locked up in the lamp for 10,000 years–know who Peter Lorre and Groucho Marx are? Does the lamp come equipped with TCM, because if so … yeah, I want to live there). But what ultimately makes it work is the marriage of Williams’ spot-on vocal delivery and the brilliant animation of those numerous impersonations. Williams provided the filmmakers with so much material, in fact, that they weren’t able to use it all, and those unused outtakes make up one of the best “special features” on the new Diamond Edition Blu-ray release of the movie.

While Williams–somewhat predictably–steals the show as the Genie, the voice cast is truly top-notch all around. As the young lovers, Aladdin and Jasmine, Scott Weinger and Linda Larkin bring verve and spirit to their roles (though not their singing voices, which were dubbed by Brad Kane and Lea Salonga respectively). Jonathan Freeman’s Jafar drips with a chilling, icy evil that makes him one of the most effective villains of the Disney Renaissance era, and the typically grating voice of Gilbert Gottfried works surprisingly well as Jafar’s feathered henchman, Iago. 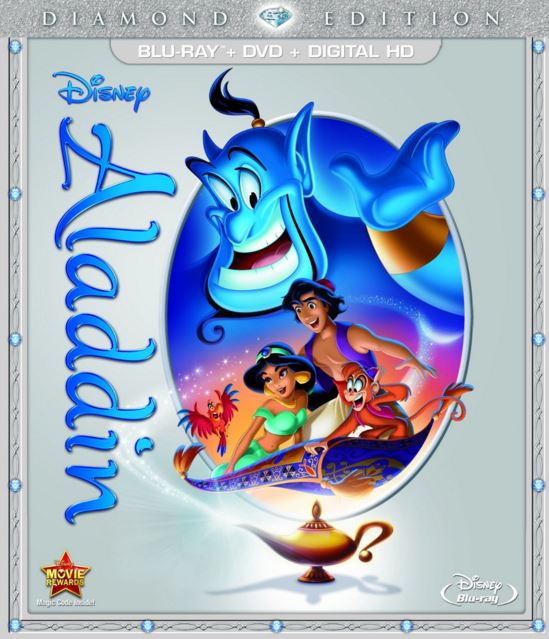 As mentioned previously, Aladdin is the latest Disney animated classic to be released under the “Diamond Edition” Blu-ray/DVD/Digital HD combo banner. This newest release boasts an absolutely gorgeous HD picture and pristine audio, and the Blu-ray disc is stuffed chock full of extras, which are well worth your time to explore (some of which carry over from previous DVD releases of the movie); these include a duo of audio commentaries as well as the usual making-of documentaries and a couple of new featurettes–enough to lose yourself in for a solid couple of hours. All in all, we cannot recommend this definitive release of the animated classic enough.

And if you want to check it out for yourself, you’re in luck, because The Retro Set is giving away a copy of the Aladdin Diamond Edition Blu-ray to one lucky reader!

The Fast and the Furious with snails. That’s how writer-director David Soren pitched Turbo, the latest release from DreamWorks Animation. And yes, the film is just that implausibly simple: gastropod Theo (Ryan Reynolds) yearns to […]

It All Started With…A Fish: The Little Mermaid and Disney’s Renaissance

By Brandie Ashe In 1989, the Walt Disney animation studios dipped back into the fairy tale well–one they’d largely avoided, with varying success, since the release of Sleeping Beauty in 1959–and adapted Hans Christian Andersen’s […]