In 1946, Director William Wyler and Cinematographer Gregg Toland gave the world one of the most important shots in film history in The Best Years of Our Lives: a deep focus long shot of a bar divided up into three planes of action—a disabled ex-soldier playing piano with his replacement hands in the right foreground, two men bemusedly looking on in the left middle ground, and one man making a life-changing phone call in a booth in the center background. The shot allowed the audience’s eyes to move freely throughout the frame and only gradually realize the devastating weight of what was happening in the background. Counterintuitively, by abandoning the traditional Hollywood film grammar of quick-cut editing between different shot sizes and distances, Wyler managed to tell his story with a power practically unheard of in 1940s cinema.

But if Wyler flirted with multi-dimensional cinematography in The Best Years of Our Lives, he experimented with multi-dimensional narratives in his magnificent 1951 film Detective Story. Based on the stage play of the same name by Sidney Kingsley, the film charts a supposedly average day-in-the-life of the 21st police precinct in New York City. Various criminals and civilians come and go as tired, overworked policemen drudge through the endless routine of paperwork and interrogations. Here’s a wide-eyed, neurotic shoplifter (Lee Grant) whose kleptomania clearly masks something else bruised upstairs. There’s old Mrs. Farragut (Catherine Doucet), a harmless old bat who comes by every now and then to ask for protection against the “foreigners next door” building atom bombs. Here comes Charley Gennini (Joseph Wiseman), an unhinged four-time loser nabbed for robbery…again. 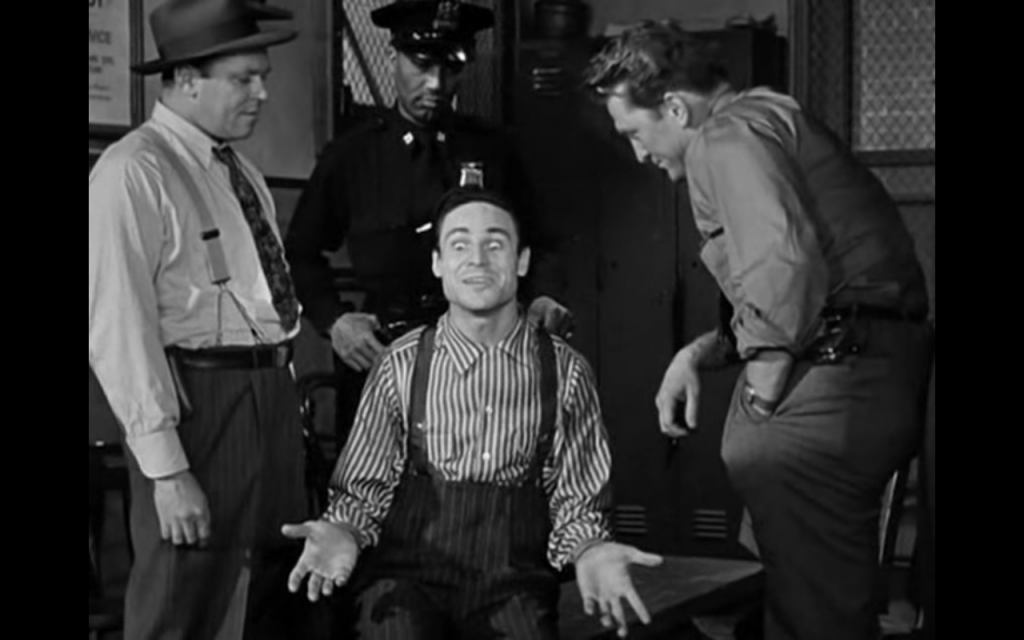 As the film’s plot proper begins, all of these and more weave in and out of the frame, grabbing snatches of dialogue here and there, nodding off while sequestered in various crannies of the precinct’s minuscule building, actually living and inhabiting their own individual lives as the world goes on around them. In this sense Wyler essentially predicts the meandering, interlocking narratives of Robert Altman—only switching out Altman’s trademark zoom for a wide-angle lens, that with enough light flooding all the planes; gives the shot Gregg Toland’s revolutionary deep focus. 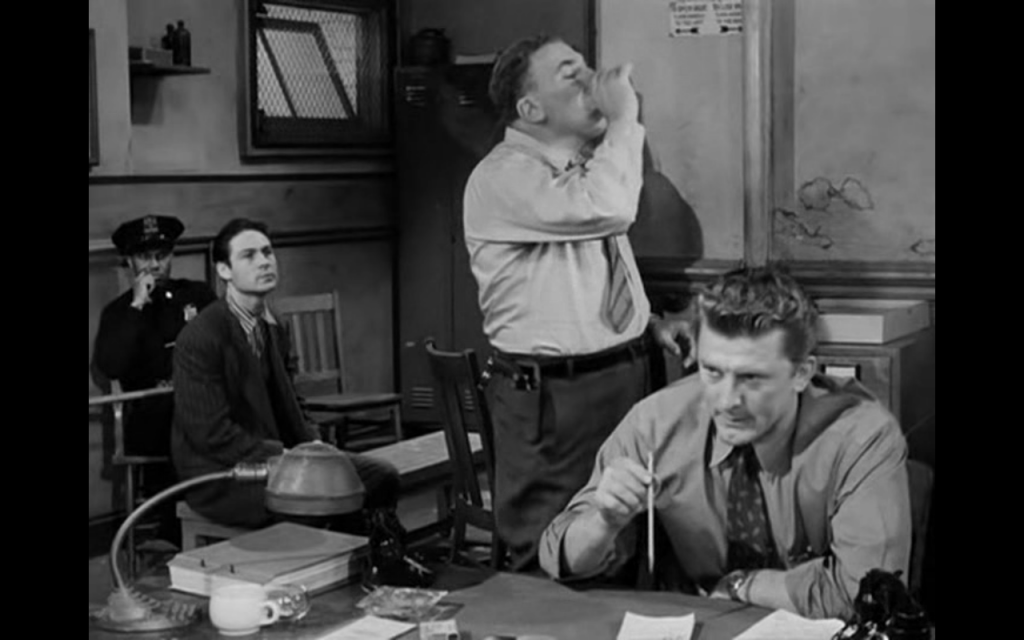 From this labyrinth, the main story eventually emerges: Det. Jim McLeod (Kirk Douglas) wages a ruthless one-man war against crime fueled by hatred for his criminal father. On this particular day, the brunt of his vengeance falls upon “Dutchman” Karl Schneider (George Macready), a New Jersey abortionist who has slipped through his fingers one too many times. By the end of the day a horrible discovery about his wife’s past “affiliations” with the Dutchman will annihilate any sense of normalcy and balance in his life. 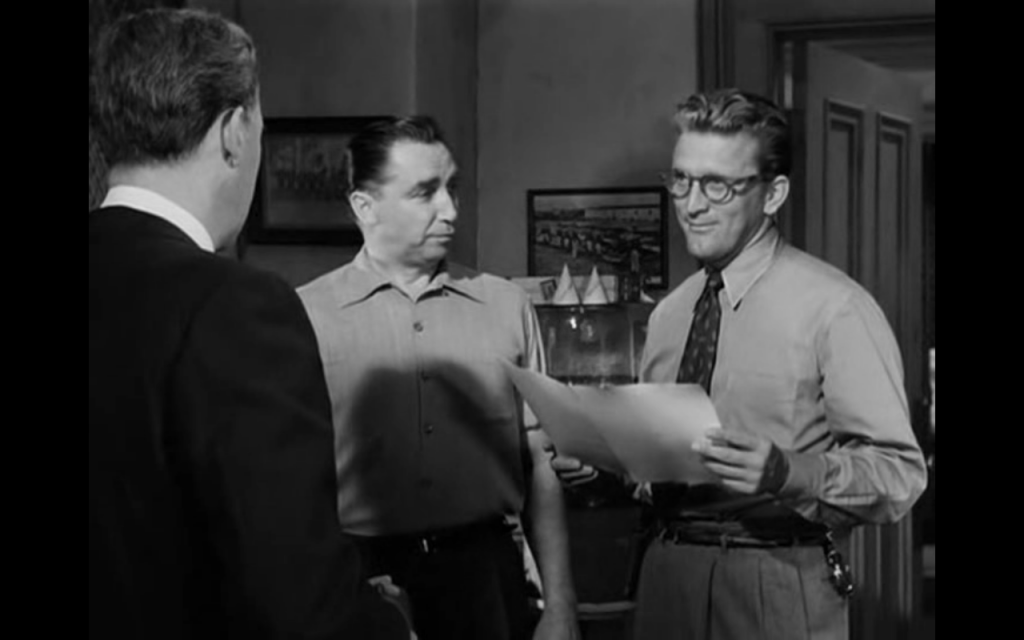 The brilliance of McLeod’s character is that he is the Mike Hammer stereotype taken to its logical extreme: incapable of sympathy or empathy, he contorts himself into a rampaging monster who lashes out, assaults suspects, and seemingly dooms himself to self-destruction. One of the film’s most chilling scenes involves McLeod bullying a robbery victim into persecuting the thief after making up his mind to forgive the man and give him a second chance—all while the thief sits by and looks helplessly on. Once again Douglas demonstrates his abilities as one of Hollywood’s most histrionic yet vulnerable actors. 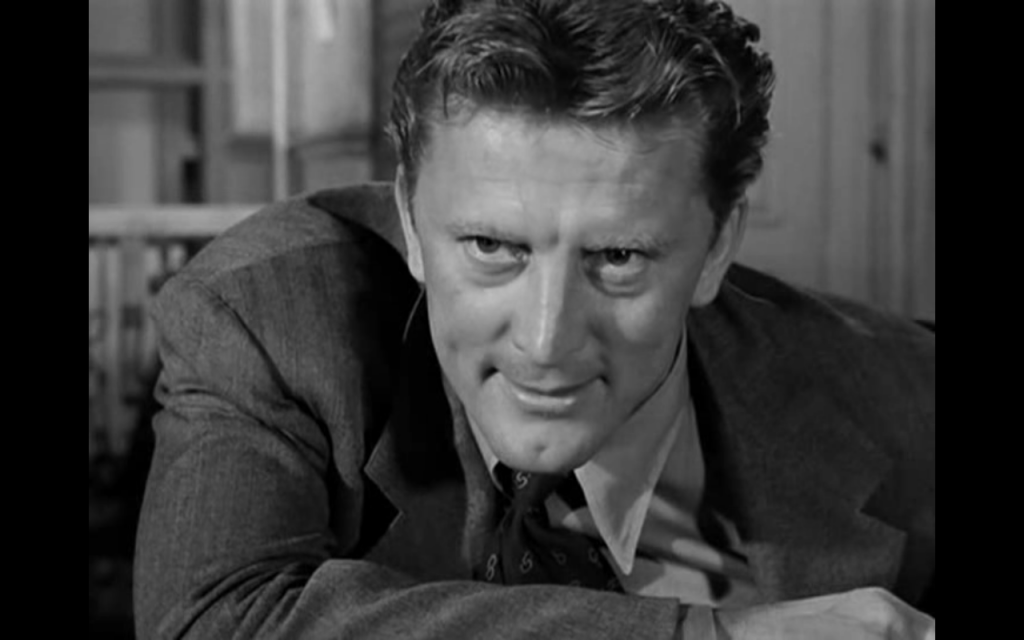 Watching Detective Story, one can’t help but marvel at the film’s three-dimensionality: Lee Garmes and John F. Seitz’s calculated deep focus cinematography keeps the police station where the vast majority of the film takes place fresh and spacious despite its cramped size; a story which organically flows from subplot to main plot to subplot and back again without losing its footing or becoming convoluted; Wyler’s insistence on the futility of moral absolutism, of justice without mercy.

For more on William Wyler’s Detective Story, check out our review of the Warner Archive DVD release here.