We love Warner Archive Instant and so should you! This week our Must Watch Warner Archive pick offers up Lionel Barrymore at his sinister best in  The Devil Doll (1936).

I first encountered this little gem back in the early 80s when my favorite band was the Los Angeles based punk rockers X, and their song of the same name was an ode to the film The Devil Doll. Everything about the Tod Browning fantasy oozes that retro-fetish German expressionist movement of the late 70s and early 80s that coincided with the punk ethos. In fact, I can remember going to several Venice beach and Hollywood parties where the Germs or Black Flag would be playing while Freaks and Nosferatu was projected against a brick wall or bashed-in garage door.

Running at a brisk 79 minutes, The Devil Doll‘s first half far outshines the labored final beats, so that, as with age, its memory outweighs the sum of its parts. Still and all, there’s a creep factor that cannot be expressed in a quick summary, and even the plot points themselves don’t nearly deliver the overall unease you’ll feel after the final MGM credit card rolls. 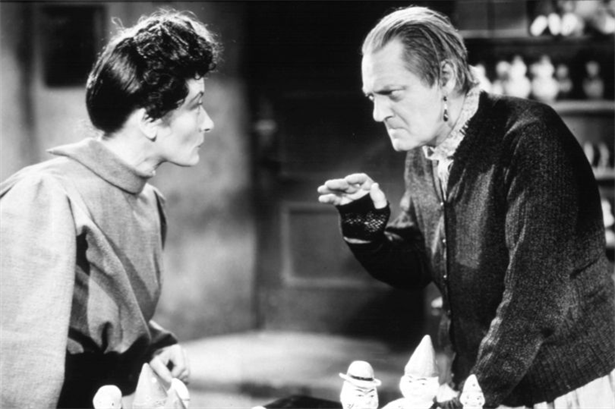 Lionel Barrymore is escaped convict Paul Levond. Along with his fellow escapee Marcel (Henry B. Waltham) they slog through the swamps of backcountry France to Marcel’s creaky shack where his wild-eyed, silver streak haired wife Malita (Rafaela Ottiono – ever the frightening obsessive-compulsive role player from the 30s) has been continuing his experiments of shrinking animals to 1/6 their size. His reason is to help end world hunger by reducing the world’s population, making a body’s need for sustenance much smaller. But Marcel has a heart attack just when they begin working on shrinking a woman.

Barrymore’s Levond sees this as a lucky break. He was a successful banker, framed for embezzlement and murder by three of his banking partners and serving 17 years in prison for crimes he never committed. Now he’s out for revenge, and talks Malita into moving her husband’s experiments to Paris. It’s here where Levond, wanted for his escape from Devil’s Island, poses as an old woman (shades of Browning’s The Unholy Three) and finds creative ways to get close to the three evil bankers separately. He offers them his dolls, then uses these tiny human slaves to do his bidding, stabbing his victims with small stilettos containing a serum that renders them either paralyzed or tiny.

Sandwiched into this eerie story is Levond’s daughter, played by Tarzan regular Maureen O’Sullivan, who only knows her father as the escaped convict whose crimes drove her mother to suicide and relegated her own existence to destitution. Levond attempts to get close to his daughter, posing as the old woman. His struggles to re-introduce himself to her, and ingratiate her and her boyfriend to him become the laborious finale that leaves the viewer as limp as the lifeless dolls. Too bad, because the journey itself is really worth the time.