This black angel wearing white floats on air, but nevertheless has purpose in her steps and revenge in her heart. Its skeletal structure, its pitch idea, is not unlike Quentin Tarantino’s Kill Bill, and, come to think of it, it wouldn’t be entirely surprising if François Truffaut’s The Bride Wore Black (1968) provided much of the inspiration to his gory odyssey.

This dark tale about a widow (Jeanne Moreau) exacting revenge on the five men who murdered her husband, was intended as an homage to one of Truffaut’s favorite filmmakers, the incomparable Alfred Hitchcock. But it never feels like a Hitchcock film, despite frequent Hitchcock collaborator Bernard Herrmann providing the score. I suppose that leads some to breakdown exactly what is meant by “homage”. To my understanding, homage is usually an honorific term, one meaning that the intention is to pay tribute to something or someone, and more often than not trying to recreate their style or tone, and yet imbue it with the voice of the artist at hand; to be original and also to pay tribute. It’s not the same thing as a pastiche, which insinuates that there be a much closer correlation between this new piece of work and the older text being referenced, but it should be recognizable all the same.

For instance, Noah Baumbach’s Frances Ha is a discernible homage to, funnily enough, the films of the French New Wave, including the works of Godard, Truffaut, and Rohmer. Shot in black and white in a kind of “on the fly” style that says something like “Cotard went digital!” and doused in an energy both wonderfully retro and impressively new and young, Frances Ha knows how to do it.

The Bride Wore Black, on the other hand, feels a little slight to me, at least as far as looking through the lens of “homage”. Maybe it’s cruelly unfair that I should compare a Gen-X director like Noah Baumbach to one of the Nouvelle Vague masters like Truffaut, but none of The Bride Wore Black, beyond its initial premise, feels at all like Hitchcock. (This might also be due to my unseemly naiveté.) There’s no formal or thematic tension in the film, there’s no austerity to the framing or the tone, and the perversity of any of it is obfuscated by how much it feels like a Truffaut film. (For a fun Hitchcockian kick, check out Xavier Dolan’s Tom at the Farm.)

For what it’s worth, I don’t think The Bride Wore Black is by any means a bad film, just that its particular label of “homage to Hitchcock” is incorrect. But what is admirable about the film is maybe considering the particular spin that Truffaut puts on these Hitchcockian scenarios. The tension that exists is uniquely Truffaut-esque, even if their initial inceptions may be better linked to the Master of Suspense. Sequences that feature the lovely Jeanne Moreau killing someone aren’t that frightening, per se, and nor are they as potent as, say, the suspense of Truffaut’s The Last Metro. But they do have an interesting weight to them that’s oddly airy and not self-serious. 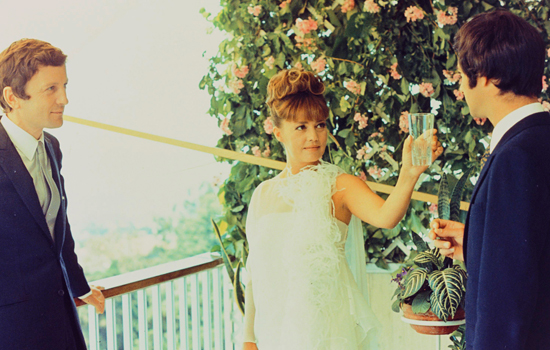 There is power, though, in the scenes in which Moreau relives the day her husband was murdered, lushly orchestrated, and painting a Rashomanian picture of the event. And yet, here too, the melancholy present isn’t Hitchcock’s, but the trademark of Truffaut. In his films The 400 Blows, Jules and Jim, and Shoot the Piano Player, there’s always a real sense of sadness and sorrow that is, in its own way, unable to be replicated. The camera pans down the church steeple again and again and we feel the same sense of loss as Moreau.

Perhaps one of the primary points of the film is to point out these unseemly and strange juxtapositions. The light and dark of it all is pointed out in a playfully obvious manner, with Moreau’s black angel often wearing white before a kill. The greatest juxtaposition of the film, though, is its approach, a film with a dark heart but a strangely lovely and fun feel to it, very typical of Truffaut. The South of France is shot lovingly, in bright colors and warm hues. Such a jarring juxtaposition is exactly that: it catches you off guard, leaving you to find your balance.

The Bride Wore Black is now available as a limited edition Blu-ray from Twilight Time, only available from online retailers Screen Archives Entertainment and TCM Shop.

François Truffaut was never properly suited to film noir. His enthusiasms were too childish and his outlook too optimistic to ever be properly gloomy or cynical for that most nihilistic of genres. His male characters […]