This week, we pay homage to Black History Month with a trio of films that touch upon three very different aspects of the African American experience on film. First, we have a made for television movie from 1981 starring the magnificent Louis Gossett Jr., Don’t Look Back: The Story of Leroy “Satchel” Paige, which follows the volatile career of the pioneering African American baseball pitcher who is often overshadowed by fellow legend Jackie Robinson. Next, it’s the first all-star African American feature film to come from mainstream Hollywood, 1929’s Hallelujah! which gave birth to the first ever black movie star, the stunningly beautiful Nina Mae McKinney. And finally, LeVar Burton stars in the engaging drama Dummy, based on the true story of a black deaf-mute wrongly accused of murder … or is he? 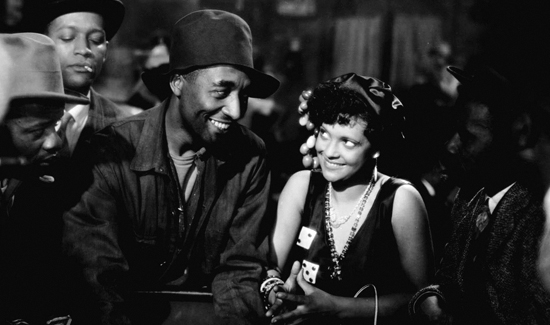 15 years after D.W. Griffith introduced narrative cinema in 1915’s groundbreaking The Birth of a Nation – and incited a revival of hatred against African Americans – the black experience had been relegated to the shadowy recesses of Z-budget cinema. There was no place in mainstream white cinema for race pictures, and certainly no money in it, but with the advent of sound, director King Vidor had a different idea. Vidor was obsessed with making an all black picture and, after years of being turned down, seized his chance when The Jazz Singer and talkies took Hollywood by storm.

Promoted as an all-black, all-talkie musical, Hallelujah! is an operatic tragedy that chronicles the rise and fall of a poor black sharecropper (Daniel Haines) who swings between the temptations of the flesh (at the mercy of bombshell Nina Mae McKinney) and the salvation of the Lord. Hallelujah! is not an easy watch, and it is a very deep one; I would not recommend watching on a whim, unless you have proper contextual guidance, as it is easy to misinterpret the film without it. That’s why black film historian Donald Bogle’s commentary is absolutely critical. Appearing on the Warner Archive MOD version, his commentary is missing from the Warner Archive Streaming version, so you won’t be able to get to know the background behind the actors (Daniel Haynes was a college graduate from Morris Brown in Atlanta) the production (King Vidor had to put up his own salary to convince MGM to make the film) and the cultural complexities the film represents (McKinney is light skinned and keen featured, setting the standard for mainstream black beauty for everyone from Dorothy Dandridge to Halle Berry).

And even though there are holdovers from Birth of a Nation here — Zeek can be seen as a sexual predator, conflicted though he is; the sharecroppers take their paychecks and go straight to shooting craps — Vidor definitely achieves a number of firsts. In gorgeous Nina Mae McKinney (that’s ‘nine-uh’ not ‘neen-uh’) we see the birth of the first ever African American movie star; her lustful, wicked city woman “Chick” is the first time a black woman had ever been allowed to be a sex object in mainstream film.  But more importantly, he was able to– in spite of the stereotypes– give a dignity to black family life and humanity to the African American experience on the whole. There is one extraordinary, sweeping, epic sequence of lamentation, in which Vidor brings the black Spiritual to screen with overpowering emotion. His close-ups, cutting to moments of intense grief, for nearly a ten-minute stretch, suspend time, achieving an almost cinema-verite quality.

Bottom line: If you remember the fact that, prior to Hallelujah!, the only time African Americans appeared as main characters in mainstream white cinema it was as villainous rapists and drunks in Griffiths’ Birth of a Nation, Vidor’s film achieves a major milestone. For all its tired tropes, the characters possess emotional depth and human complexity; for the first time ever in mainstream cinema, African Americans were allowed to be seen as human beings. 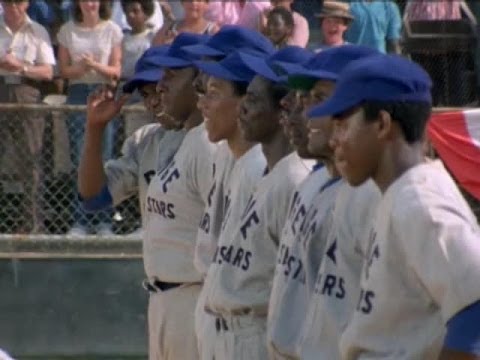 I’m not a baseball fan, but I am a huge fan of baseball movies. There’s an inherent dramatic element to the game that, even if it doesn’t move me in real life, you better believe I’m a sucker for it on the big screen. Whether it’s Kevin Costner’s spiritual father-son journey in A Field of Dreams, the deeply bitter sibling rivalry of A League of Their Own, or the good-guys-finish-first Americana of The Pride of the Yankees, one thing is constant: dugout drama is deeply human and very hard not to hit a home run with.  I’m an even bigger fan of made-for-TV movies of the 1970s and 80s, which is why Don’t Look Back: The Story of Leroy “Satchel” Paige, a 1981 move of the week currently available for streaming on the Warner Archive, is an ace fireball. (Is “ace fireball” a real baseball-y thing? I dunno, I just stole it from a movie, sorry.)  They’re rarely overly melodramatic, and of hell of a lot higher quality than most anything you’ll see in mainstream theatricals today. There is an element of trust in the audience in these made-for-TV films, many of them taking surprising risks that have long since left network television.

Don’t Look Back is the true story of African American baseball legend Leroy “Satchel” Paige, played by the great Louis Gossett Jr. in a vigorous performance, following his struggle to overcome institutional racism during the 1930s and 1940s that was hellbent on keeping him ‘in his place’—that is to say, away from the white major leagues. But Paige is an ambitious, cocky salesman—and therefore showman— who knows in his gut that he’s better than any white pitcher in the big leagues. A fact that he proves in, what is the highlight of the film, a series of “exhibition” games between the African American major leagues and the white major leagues where he consistently strikes out the likes of Rogers Hornsby (in a pitchers duo for the ages). Paige’s career fluctuates from the top of the black leagues to the bottom and back again before, finally, getting the break due him in the trailblazing footsteps of Jackie Robinson’s. As incredible the legend of Robinson is, it is Satchel Paige’s story that is, in some ways, even more thought-provoking. It makes it clear that Robinson was not necessarily a one of a kind player–he was, without question, a major talent, but he was also the right man at the right time, coming from the ranks of countless African American ballplayers of equal and even greater talent who were denied a major league career because of their skin color. “We sure could use you, boy,” says one manager to Paige, “if only you was white.” (Ossie Davis makes a brief and welcome cameo, as one of the legends of the black major leagues who is a living example of the glass ceiling.)

Another refreshing surprise is that the film shies away from the tired trope of the white savior. Yes, it takes a phone call from a white manager to get Paige a tryout with the Cleveland Indians, but this is almost an after-thought. This film is entirely about Paige’s own tireless will to triumph— help from the white man hardly even factors.

Filmed in the typical TV biopic model, lots of voice over narration and flashbacks, Don’t Look Back excels from the fact that there isn’t a dishonest or over-produced bone in its taut body. Directed by TV helmer Richard A. Colla, the film is a prime example of the kind of highly intelligent, hot-button issues that made-for-TV movies were capable of tackling in the era of three-network television.  Professor Robert Thomson of Syracuse University put it best “at the time, it was the only way these issues got into the mainstream … they raised the consciousness of a lot of people.” And they did it with good old-fashioned, smart, slick storytelling. 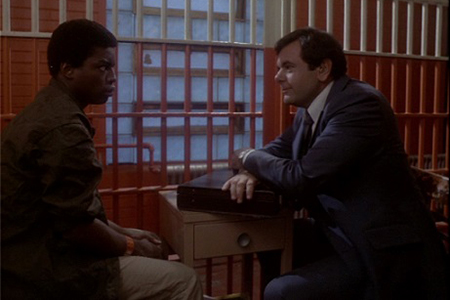 LeVar Burton is Donald Lang: an African American deaf-mute who is accused of the brutal murder of a prostitute. His case is purely circumstantial, but that doesn’t shake the fact that, due to his inability to communicate, he’s thrown in jail and bounces in and out of mental institutions for five years. The man who sees the gross injustice being leveled at the man is Paul Sorvino: a fiery attorney who takes on the case. This gifted orator has one very important connection to the accused Burton: he is deaf. (The fire and fortitude of Sorvino’s character foreshadow the inimitable Marlee Matlin’s Emmy award-winning turn in the 90s TV series Reasonable Doubts.) The story works as a modern day Miracle Worker, with Sorvino in the role of the Teacher … only Burton’s Lang never achieves Helen Keller’s breakthrough. Dummy is an interesting, but clunky, courtroom drama that is made memorable only by the virtue of thew two leads.

Sorvino is the undisputed star of this film: a commanding presence and thoroughly believable as the deaf attorney who takes on the case as a human rights issue. The same brand of silent outrage that infused Burton’s turn as Kunte Kinte in Alex Haley’s Roots, is at play here– but instead of being imprisoned by the institution of slavery, he is imprisoned by the gross injustices of the legal system. Except, as the film closes, one question remains: is he innocent? You be the judge.

B-Roll: King Vidor’s TRUTH AND ILLUSION: AN INTRODUCTION TO METAPHYSICS (1964)

By the 1960s, director King Vidor ’s star had largely faded. During his decades-spanning career, Vidor helmed a filmography at once both intensely personal and enthusiastically catered for mass appeal. His was a cinema of […]