Majestic, epic in visual scope, complex and meditative, The Man From Laramie is probably Anthony Mann’s most mature and reserved western. That’s not to say it doesn’t offer up the director’s signature action, unpredictable violence and twisted characters motivated by jealousy, rage and insanity as other Mann melodramas. But it’s told in such a disarmingly even-tempered cadence that its style belies the more insidious themes at play.

The Man From Laramie was the last of five Westerns the director collaborated with his avatar James Stewart. After serving as a bomber pilot in WWII, the sweet young actor returned with a more disturbing energy, a realist among the milieu of Hollywood clichés. Whether peering out his apartment window with binoculars, obsessively pursuing a ghost or haunting the desert landscape on horseback, Stewart carried a gravitas that only added to his skill as an actor befitting the mature parts he inhabited during the 1950s and early ’60s. 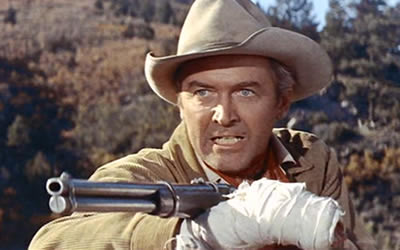 And it’s the morally ambiguous and complex characters that fill Mann’s stories that make them such first-rate affairs. The Man From Laramie definitely, painfully takes its time getting there. Stewart’s Will Lockhart is guiding a mule train from Laramie to the isolated western town of Coronado. It’s quite clear that making it through deadly Apache territory requires luck and skill, and based on the tenacity of their wagon master, Lockhart’s crew makes it through safe. It’s also clear no one in the town really wants the stranger and his goods. When Lockhart attempts to unload the sundries at Waggoman’s Mercantile, the daughter of the deceased owner admits she had hoped the supplies would never arrive, since she wants to close up the store for good. Lockhart is taken aback by the admission. He’s strangely attracted to the young woman (Cathy O’Donnell) who explains that if he wants to return to Laramie with something worth his time, he can harvest salt from the nearby salt flats outside of town; they don’t belong to anyone.

It’s therefore quite surprising when Lockhart and his men are attacked by Dave Waggoman (Alex Nicol) a raging, spiteful and spoiled brat of the big Cattle Baron Alec Waggoman (Donald Crisp). Without provocation, Dave, using a half-baked argument that Lockhart is trespassing, kills most of Lockhart’s mules and burns all his wagons, as well as dragging Lockhart, lassoed, through a burning campfire. Too late for help, Vic Hansbro (Arthur Kennedy) the ranch foreman breaks up the mob, but it’s too little. Lockhart promises revenge.

Back in town, little more than a few hours later, Lockhart comes upon Dan and punches him out, starting a down and dirty fight amidst a horse corral. Vic jumps in and takes over the fight; he and Lockhart are evenly matched. Finally, Alec, the patriarch breaks it up and chastises Vic and Dave. He promises to pay Lockhart back for the mules and burned wagons. Lockhart feels that’s fair, but he’s still seething over his mistreatment.

Once Lockhart arrives at Waggoman’s ranch to collect, he learns that crazy Dave is the sole heir to the Waggoman fortune. Vic, engaged to Barbara, the general store owner, has been Alec’s right hand man for a long time, and was promised if he kept an eye on the wild and woolly Dave, that he would split the ranch with him when Alec passes. But Alec’s word is questionable in Coronado, especially based on his prior track record of making and breaking deals. Alec pays Lockhart what he owes him, but admits he wants Lockhart to move on as soon as possible. He dreamed of a tall stranger, resembling Lockhart, coming into town and killing him and his son. Lockhart is not so eager to leave, as he’s on the trail of a man responsible for selling the Apaches repeating rifles, which resulted in an entire Cavalry troop’s murder. The troops included his brother.

Besides Stewart’s Lockhart, no one is a good guy. Everyone holds secrets, and Lockhart is the catalyst for all the dirt and ugliness of the past to come boiling to the surface. While Lockhart is a good man, he still harbors anger, hostility and vengeance for those who have crossed him.

Arthur Kennedy, another Mann regular, again plays the morally ambiguous cowboy. At his heart, he is a hard-working foreman who has been given an impossible task, of babysitting a homicidal maniac whose only connection is his being the son of Alec Waggoman. The patriarch is blind (quite literally) to his only flesh and blood’s homicidal behavior. (Waggoman’s sight has almost completely left him; as well as figuratively, his ability to see the truth in anything revolving his son). Feeling pretty sure he’s going to be left high and dry in the will, Kennedy’s Vic decides to take matters into his own hands, developing an illegal plan that may yield money, but will ultimately damn him.

So there’s big Shakespearean, incestuous style themes at work in this Phillip Yordon/Frank Burt screenplay. Mann had been wanting to create a western King Lear for a decade, and while The Man From Laramie doesn’t  necessarily deliver that complete an adaptation, it’s clear this is what the director was going for.

The big tent pole scene, which is the reason to see the film, and has been show in clips for years, is the moment where Dave Waggoman, thinking Lockhart deserves eye-for-an-eye retribution after being shot in the hand after an altercation he, Dave, started, has his henchmen hold Lockhart’s hand aside and shoots him point blank in the palm. It’s gut-wrenching, powerful and the best example, not only of how powerful violence can be when perpetrated outside of the frame, but of Stewart’s incredible acting chops.

The entire violation is played out on his face. When I first saw it as a child, I was traumatized. Who would perpetrate such a monstrous act against my idol, Jimmy Stewart? His reaction, shock, pain, bewilderment and humiliation, all plays out in a powerfully extended shot. His only line “You scum!” is a kick in the nuts. His slow shuffle into the desert afterwards is something akin to watching the victim of rape stagger blindly away. These are images that will never leave you. 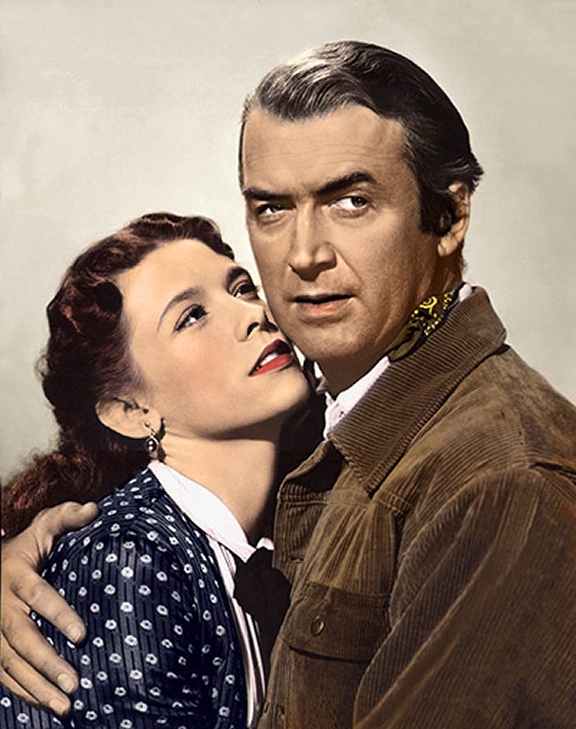 Twilight Time’s beautiful restoration on Blu-ray is a crisp and clear marvel, heralded as the first time the film has been accurately restored to its proper 2:55 aspect ration . (I question the veracity of this claim, as the edges of the frame distort, most noticeably during pan shots, which usually indicates some aspect tamperings to fit the screen, but this will not take away from most viewers’ pleasure).

As much as John Ford was acclaimed for his stunning use of Monument Valleys’ wide vistas, Mann was also a connoisseur of the western landscape, and never has it been more apparent than in The Man from Laramie. It may take its time in getting where it needs to go, but once it does, the film is a more than satisfying addition to the greatest of Hollywood westerns.

The Man from Laramie is available as a limited edition blu-ray only through Screen Archive Entertainment and the TCM Shop.

Escapist Fun in the ’50s Sun: On The Riviera

So here’s the thing. Walter Lang’s 1951 musical On The Riviera is not a great film. It’s not even a particularly good film. It’s all style without substance, and what could have been a prime […]