Warner Archive Collection has recently released two lesser-known MGM classics as Manufacture on Demand (MOD) DVDs that are definitely worth viewing if you’re a Joan Crawford fan, or curious about seeing Robert Montgomery before he took on his more world-weary noir roles and stepped into the director’s chair.

By the time sound films were a mainstay, Joan Crawford was already a household name. She had started as a body double for Norma Shearer back in 1925, and was consistently churning out over 30 films by the time she made her first sound features in 1929. Her breakout performance in 1928’s Our Dancing Daughters (she plays an outwardly flamboyant flapper who is inwardly virtuous), followed up with the similarly titled Our Modern Maidens, where she also played a jazz age flapper, were so popular, MGM, where she was currently under contract, released the “all-talking” Our Blushing Brides (1930). And there was no false advertising here; this film really is all talking.

Sound technology was still adjusting to its growing pains. The year 1930 saw several advances, so that films released later in the year showed a marked difference from ones released just 12 months prior. Originally housed in big boxes, cameras had lost much of the fluidity of movement that highlighted the best of the silent years. Our Blushing Brides is an interesting hybrid, exhibiting some early scenes that get the camera moving, shot synch sound, while others are painfully stilted, as the tracking shots were expensive and time-consuming, and more times than not, had to be scrapped as production costs mounted.

Crawford and roommates Anita Page and Dorothy Sebastian all work at a department store, spending much of their time fending off men. Crawford is a model, showing off evening gowns and lingerie to the well-to-do clientele. All three girls hope to marry wealthy men, and their adventures result in a variety of outcomes. Sebastian is pursued by a seemingly rich aristocrat. She marries him, only to find out he’s penniless and connected with her to get into the department store and rob them blind. She only learns this as she’s cuffed an led away by the police. Page connects with the Jardine Deparment store owner’s youngest son, David. He courts her heavily, until she learns on the radio he is going to wed high-society debutante Evelyn Woodworth. She takes poison, is discovered by Crawford who has her rushed to the hospital. Our Blushing Brides is by no means a comedy, ironic title or no.

Crawford is pursued by the eldest Jardine heir, played with jovial good charm by a very young Robert Montgomery. He’s a sweet man, who can’t understand why Crawford continually rejects him. (She’s a virtuous girl, and knows he’s after just one thing). Of course by story’s end, she comes around, and he learns to be less of a cad than he started out.

There are several things to like about this third installment of the “our” series. While all three films co-starred Anita Page and Dorothy Sebastian, there’s no hiding the fact that the three actresses have learned to bounce off each other well, and they share a nice rapport. Crawford, herself, is quite a ham, but there is something engaging about her charisma and onscreen vitality. You can’t help but look at her when she’s on camera. 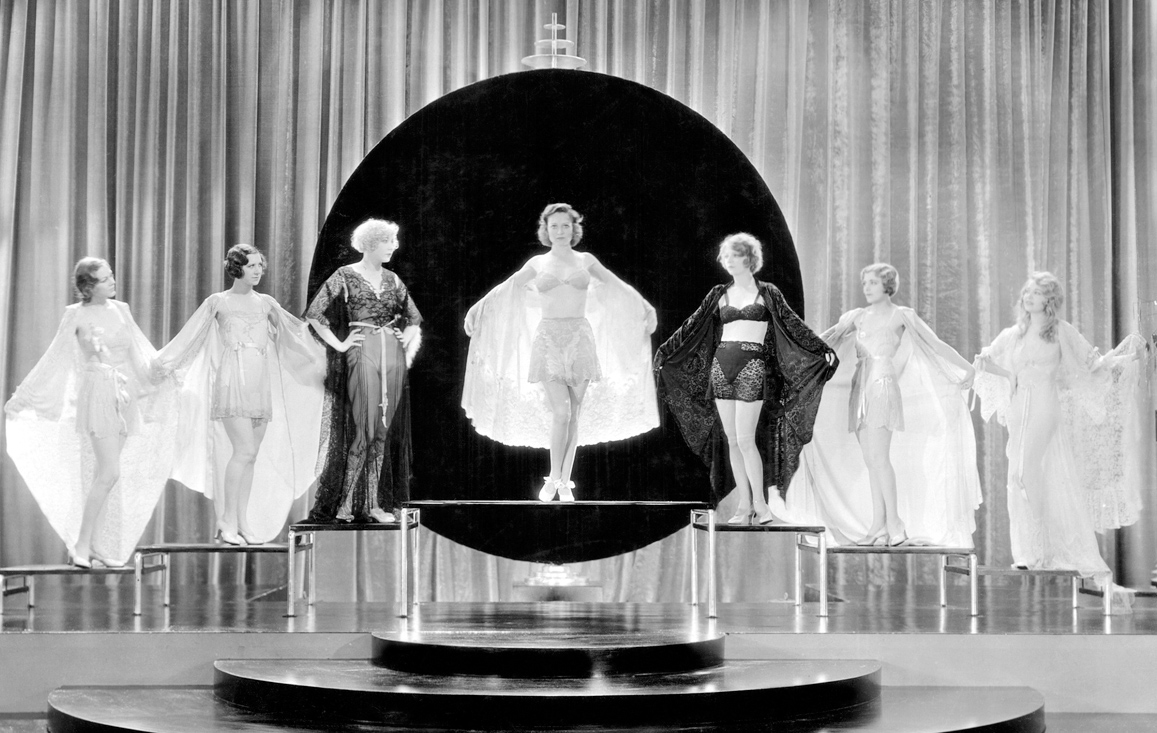 There are several extended scenes of her and the other “mannequins” (literally the job title of the models) showing off their lithesome figures and chic clothes; and for costume design enthusiasts, it’s quite a fun time capsule.

Early on, as the employees are “clocking” in at work, you get a few tracking shots that offer a very sophisticated audio montage, passing the women at their lockers as we overhear snippets of conversation that range from gossip to the hardships of raising a child while working, that play very realistic.

The design is pure deco decadence, the main reason to stay with the soap operatic proceedings. Wealthy Montgomery shows Crawford off his beautiful estate that includes a lake and island with a large tree. When he switches on a light panel housed in the tree trunk, we see a beautiful and awe inspiring tree–house where he claims to go when he wants to “be alone.” (Take it from me, it’s a very 1930s bachelor pad). Once they climb up a hi-tec ladder that drops down, we enter a huge set that’s supposed to double as the interior of the tree-house. It would be laughable if it wasn’t so marvelously opulent.

Montgomery is always a charmer, and even though he plays a somewhat obtuse but well-intentioned rich boy, he still finds a way to make the role fit him, rather than vice versa. 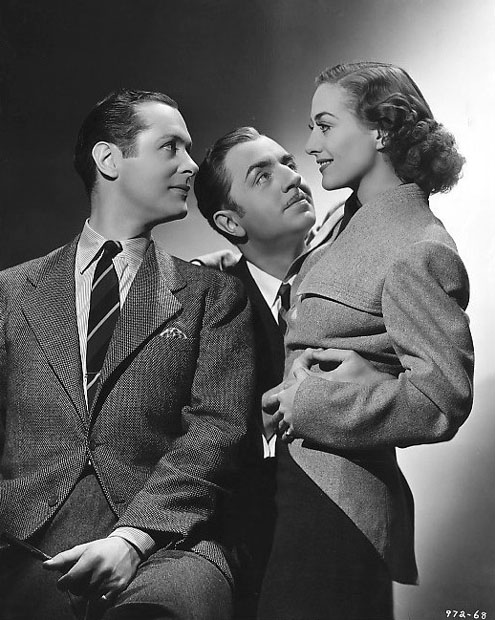 The actor comes off a little more fop-ish if not downright ineffectual in the comedy-drama The Last of Mrs. Cheyney(1937), a clunky titled play adaptation that sadly retains its claustrophobic drawing room trappings. The plot sounds a lot more interesting than it is; a chic jewel thief (Crawford) and her crew of con artists sets up an elaborate heist to ingratiate themselves into Montgomery’s wealthy family, in order to make off with a priceless necklace.

The real selling point here is the stellar supporting cast, which includes everybody’s favorite William Powell as Crawford’s partner in crime (and perhaps lover?), as well as lovable Frank Morgan and Nigel Bruce as two of her marks. After Morgan finds Crawford in his cruise ship stateroom, what seems like an apparent misunderstanding turns out to be a carefully orchestrated “meet-cute” for Crawford to seduce the befuddled English “Lord.” The story takes place mostly in England, with the cast members struggling haphazardly with accents with varying degrees of failure.

The best scene comes after Crawford, posing as a wealthy widow expatriating to England, holds a charity auction. Once the elite have left her house, the maid, then the butler, and other household servants, one by one, take off their uniforms, light cigarettes, and begin casually “draping” themselves about the mansion, until it becomes evident they are all playing roles, and the true nature of this “crew” is revealed. It’s a great scene, all the more enjoyable because it is subtly staged without fanfare. In fact, when Powell shows up as part of the mis en scene, it’s shocking. He was a huge marquee name at this point, and the fact that in his first scene, he doesn’t get the usual “movie star” entrance, but is instead relegated to the background, is really an enjoyable surprise. 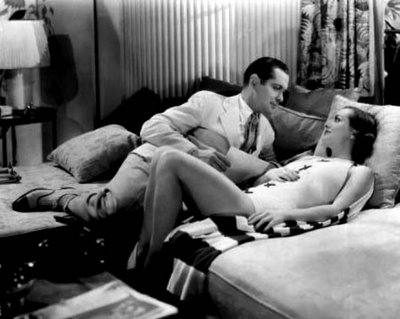 The third act sadly struggles under the weight of the dense dialogue, and Crawford, no match for her strong supporting players, still does her best to stay afloat. Powell, just a year after his Oscar nominated turn as the homeless butler in My Man Godfrey, here again plays a man posing as a butler, and as usual, he brings the same heft and substance to this similarly drawn character.

Montgomery exudes charm, but the character does not seem worthy of Crawford; since she and Powell are so well-matched. There’s a somewhat false note to their final embrace.

All in all, these two films are a worthwhile diversion, and more evidence that MGM sported more “stars than there are in Heaven.”

New to Blu-ray: The Best of Bogart Collection

Fifteen years ago, as part of its 100 Years…100 Stars celebration, the AFI announced a list of the 50 greatest American screen legends. The list was split, with one half dedicated to the top 25 […]