85 Years of the Oscar: The Official History of the Academy Awards
(Abbeville Press, 464 pages, $75)
By Robert Osborne

In 1979, Robert Osborne published the book 50 Golden Years of Oscar: The Official History of the Academy of Motion Picture Arts & Sciences. This massive text served as a straight historical account of the ceremony’s first half century, without critical bias or speculation. Ten years later he released an updated history, 60 Years of the Oscar: The Official History of the Academy Awards, much in the same style as the first. Following its popularity, Osborne (now the Academy’s official historian) began publishing an updated edition every five years.

In November 2013, Osborne published his seventh volume, 85 Years of the Oscar: The Official History of the Academy Awards through Abbeville Press. Like previous editions of this impressive and beautiful reference text, he has again provided film lovers with the ultimate guide to Hollywood’s biggest night. The book is organized by decade, with each section featuring an introductory history lesson on Academy goings-on. Osborne presents interesting facts, quotes, and anecdotes, leading into a year-by-year detailed listing of every Academy Award nominee.

A brief example of what can be found: Prior to the 1940 awards, winners were notified in advance of the ceremony. Even when the Academy made attempts to keep the winners a secret for the 1939 awards, it still divulged the list to the press with strict instructions that they couldn’t run the story prior to the ceremony. The Los Angeles Times didn’t adhere to the Academy’s wishes and printed the winners’ names in their evening edition right as the stars were en route to the awards ceremony. As a result, for the 1940 awards, the Academy hired Price Waterhouse to tabulate the votes and keep the winners a secret; each one sealed in an envelope until its opening at the ceremony. This is the Academy Awards we know today.

Another interesting bit: It’s widely known that George C. Scott and Marlon Brando both (in)famously refused their Academy Awards for Best Actor (in 1970 and 1972, respectively). While they may have been the most remembered protestors of the Academy, they weren’t the first winners to do so. Writer Dudley Nichols was actually the first to refuse the award when he won for his screenplay for The Informer (1935). 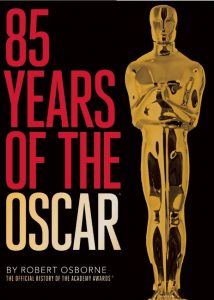 Just like his remarkable work as host for Turner Classic Movies, Osborne does not play the revisionist. From the mass exodus in 1933 when actors left to form the Screen Actors Guild, to Oscar telecast nightmares like the 1988 ceremony’s awkward Rob Lowe/Snow White opening number nightmare, Osborne gives the reader the complete story, warts and all. It’s all here: 472 pages, complete with 765 glorious photos and illustrations.

This gorgeous book is a must-have for anyone who’s interested in the story of the men and women behind Hollywood’s ultimate award.

The Oscar Ceremony That Almost Wasn’t

The red carpet, the secret envelopes, and the after-party glitz and glam have become so ingrained in how we perceive the Oscar ceremony, that it’s hard to imagine a time when they weren’t anything like […]

This week we bid farewell to the patron saint of classic film, the venerable Robert Osborne. News of his death hit hard amongst the classic film community and beyond. Although he had been dealing with […]