Twenty-seven-year-old Jane Fosset, a French woman several months pregnant played by Leslie Caron, tells her unborn child’s father, an actor, that one “can’t play a part until you’ve lived it.” Fundamentally true or not, it’s doubtful those starring in The L-Shaped Room ever lived through exactly what their characters endure. But of course, that doesn’t mean their subsequent performances aren’t immensely credible. Quite the opposite. 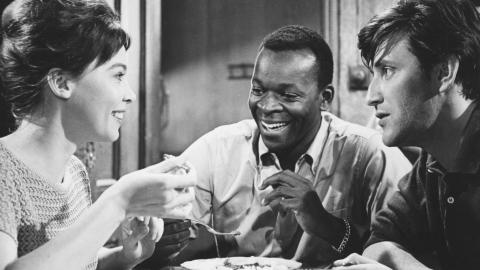 Throughout this 1962 feature, directed by Bryan Forbes, the four dominant actors—led by Caron—convincingly and ardently embody characters who have been through it all: bouts of desolation and resignation, broken families and disappointing careers, solitude and regret and unrequited love. At one time or another, they have been, or appear here, on the cusp of giving up. Yet they’ve all managed to persevere for one more day, one more week, one more month, or one more year. For all its despair, The L-Shaped Room is, in this regard, a potently positive feature about tolerance, persistence, and the connective emotional tissues that, however tragic they may be, unite unlikely swathes of humanity.

Jane is the essential catalyst for introducing these individuals, bringing about their mutual, empathetic considerations. First seen in dejected solitary wanderings, looking to settle down and hide away, the enigmatic young woman arrives at a Notting Hill boarding house with considerable baggage beyond the luggage carrying her few possessions. The house, which is promptly presented as something of a symbolic refuge, isn’t too shabby but it’s not great either, with insects mingling on the mattress and dilapidated walls. Befitting The L-Shaped Room’s complete attention to drab, low-key detail, Jane’s room is a soiled and unpolished domestic setting, which Forbes and acclaimed cinematographer Douglas Slocombe manage to vitalize with a mobile camera careening through the restricted interior arrangement. An unavoidable proximality to others opens Jane up to several of her neighbors, particularly Toby, an aspiring writer played by Tom Bell, and Johnny, Brock Peters’ African American jazz musician (“African American” worth noting as it is one of several minority groups represented and bonded in the film). Although they appear initially on the nosy side (like one big happy family, according to the caustic landlady), and Jane attempts to keep her distance accordingly, her interpersonal barriers break down and the perfect strangers foster a lively, genial group of outcasts. But not without their fair share of complications. 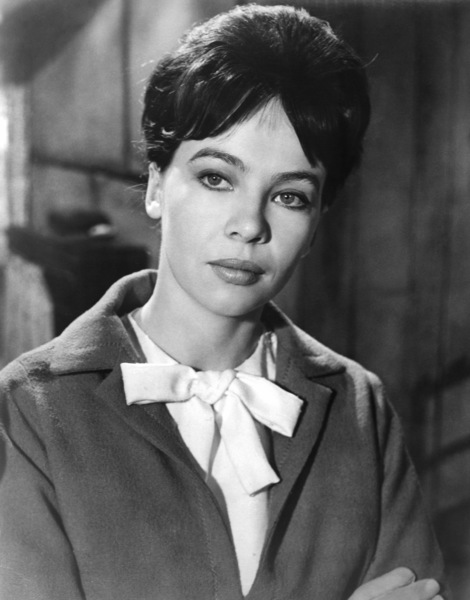 Early glimpses of Jane are often seen from the point of view of others, as they observe and scrutinize her furtive presence and the film itself reveals details of her condition in a similarly studied manner. This gradual disclosure of her character is immeasurably contingent upon Caron’s expressive response as she warms to the guests, establishes her own allied observations, and divulges an infectious charm in the process, letting go and letting down her guard. Her laudable independence is rivaled only by a touchingly honest vulnerability, and the scenes of developing kinship, vital to The L-Shaped Room’s generally episodic narrative, are delightfully enlivened by cordial banter and a natural lack of affectation from all involved. Nevertheless, Jane appears on an enduring emotive edge and Caron’s lovingly fashioned close-ups disclose the tears regularly welling up in her eyes, hinting at the thoughtful, sensitive depth of her character and demonstrating the grace of her performance (Caron deservedly won a Golden Globe award and BAFTA for best actress, and earned her second Academy Award nomination).

As Julie Kirgo notes in her essay for Twilight Time’s Blu-ray release of the film, The L-Shaped Room falls somewhere between the British New Wave’s “kitchen sink” genre and the nation’s preceding “tradition of quality.” While such designations are largely superficial and often overlap, Forbes successfully renders the best of both practices.

The picture is impeccably crafted, with roundly superb performances and Slocombe’s soft, black and white photography, which paints The L-Shaped Room in subdued shades of indelible melancholy and provides a visual counterpart to the intermittent use of Brahms’s Piano Concerto No. 1 in D minor, Op. 15, recorded by Peter Katin. At the same time, there is a refreshingly progressive presentation of contemporary romance, adversity, and malaise. Referring to his former flame, Jane asks Toby what it’s like to be in love with somebody. Toby, who admitted to seeking new material in his preliminary relationship with Jane, and certainly does, responds “bloody awful.” But that’s the way it’s been for those in The L-Shaped Room, and there is a discerning pain worn on their faces. In a film attentive to the expectations between people and the perceived concepts of responsibility and confidence, Toby is sincere in his early affections for Jane, and their relationship is treated with a seamless, realistic degree of resistance, acquiescence, and, in the end, complexity. 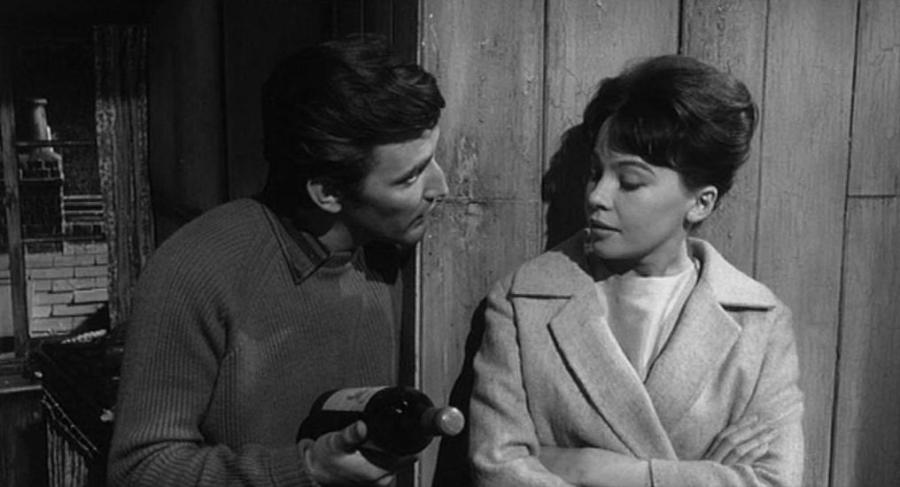 The L-Shaped Room was Forbes’ second feature as director, after 1961’s Whistle Down the Wind (he had been primarily an actor to this point), and as he wrote this adaptation of Lynne Reid Banks’ 1960 novel, he chose to omit the book’s first two chapters, which principally consist of flashback backstory. It proved to be a shrewd decision, as his film is less preoccupied by what came before in Jane’s life and is more interested in the here and now. Placing individual conditions in perspective, confronting social stigmas, and coming to sympathetic terms with lives that don’t always go as planned, The L-Shaped Room presents an endearing cast of outsiders plagued by the judgmental world around them. These people tolerate meddlesome strangers and unnecessarily cruel things said and implied, from an officer who scolds Jane and Toby for lying innocently in the park to a snooping onlooker at the pub where Jane speaks with the baby’s father; in one of the film’s most appalling passages, the doctor Jane sees about her pregnancy goes through the emotionless motions and assumes she naturally wants to abort the child—“Nobody tells me how to have it,” she later observes.

Aside from those on the periphery, though, including those unseen, like Jane’s mother, whose critical carping is such that she “even thinks colors are immoral,” Toby himself spurns Jane when he finds out she is with child, and Johnny, whose complicated reaction to Toby and Jane’s intimacy, easily heard through the building’s paper thin walls, raises his own jealous ire.

Produced by Richard Attenborough, Jack Rix, and James Woolf, The L-Shaped Room was, as Kirgo points out, given a pass by the ratings board despite its rather provocative material. One possible reason, she argues, is that it allowed Jane’s child to be born, on Christmas no less, and in a scene that is as cliched as it is effective (with the added poignancy of “Silent Night” on the soundtrack).

Speaking on a Twilight Time commentary track with Lem Dobbs and Nick Redman, Kirgo also alludes to the film’s spiritual elements, its haunting tenor, and all three recognize the picture’s admirable frankness, warmth, and empathy. While they additionally point out the film’s authentic London locations and its period-specific inclusions, there is no denying its prevalent applicability in any spatial or temporal context. Again concerning its ratings authorization, Kirgo adds she likes to think the film was also given a pass for “its sheer humanity: for its whole-hearted treatment of the lost and the misbegotten.” True enough, as this is The L-Shaped Room’s greatest virtue. And it is Mavis (Cicely Courtneidge), an aging former actress, who reveals to Jane the heartbreaking loss of her lesbian lover and delivers the film’s most memorable and emblematic line, striking at the core of the picture, its resolve, and its ultimate pronouncement: “It takes all sorts, dear.”

The schlock-meisters at Cannon Group actually put out a good film when they released Runaway Train in 1985. Not that I don’t absolutely love their weirdo camp films like Masters of the Universe (shirtless Dolph […]