They killed eleven Jews in Pittsburgh today, gunned down in their synagogue as they prayed round their holy scriptures. They killed a hundred Russians today, slaughtered in their church by a Tatar horde as they prayed to holy icons. Today, a young filmmaker raised by an Atheist state ponders the mysteries of a forbidden religion, and an ocean away a young writer in Brooklyn dreams of flying serfs and holy fools. A Hebrew king sighs and writes there is nothing new under the sun, a Christian monk lifts his brush to paint three angels seated round a table. An empire convulses as a Grand Prince hangs a traitorous brother, a republic crumbles as rigged voting machines are left untouched. Time falls away and everything collapses into a singularity of ecstatic need—a primal desire to transcend a fallen, broken world through art. And through such transcendence, the painter, the filmmaker, and the writer hope for a glimpse of the eternal. 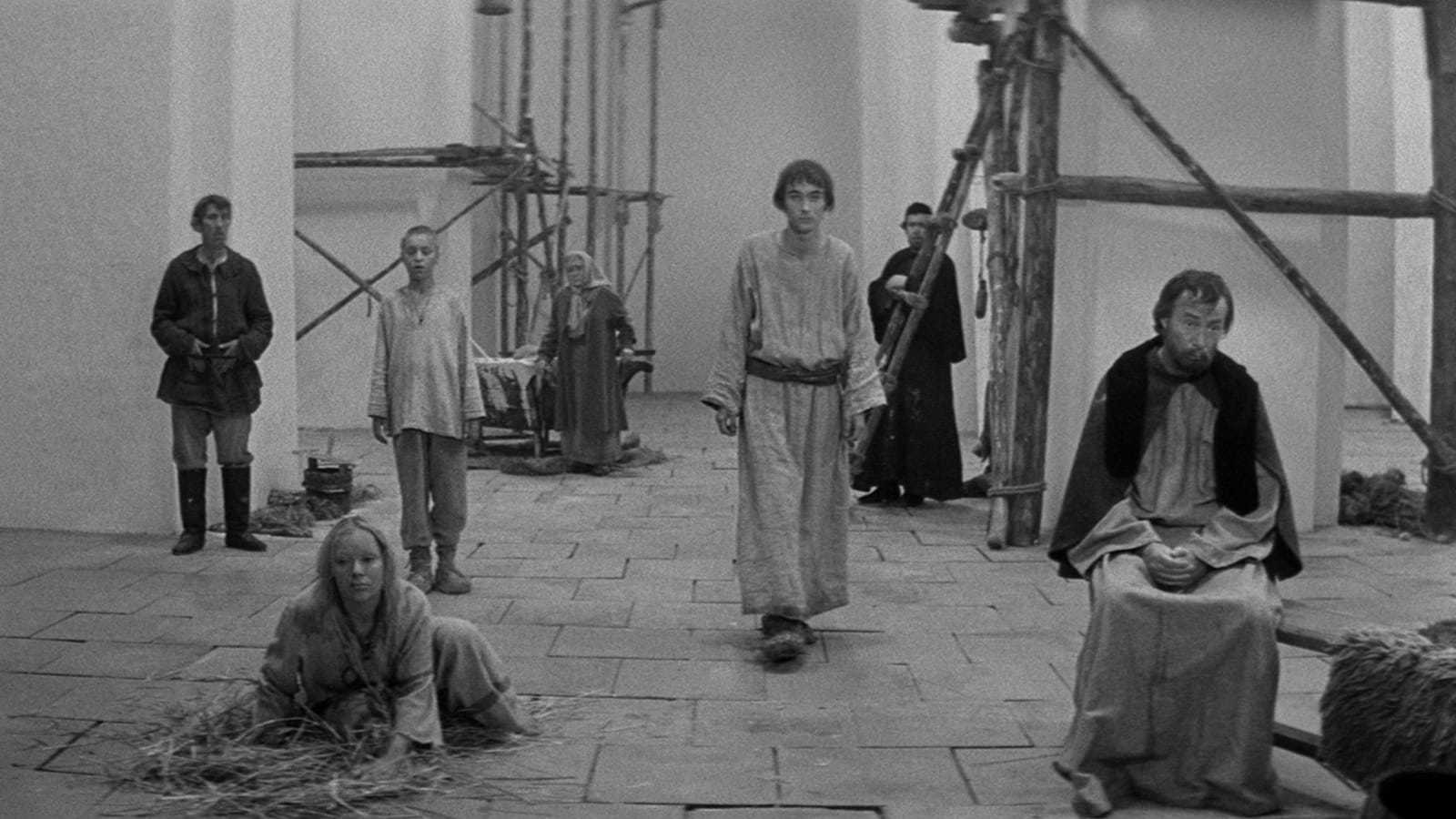 Great art tears down the barriers between peoples and epochs. In the fifteenth century, painter Andrei Rublev decorated frescos and icons that connected medieval Russians with ancient Semitic prophets and deities. In the twentieth, filmmaker Andrei Tarkovsky made Andrei Rublev (1966), a sprawling historical biography that sought to connect a godless society with the medieval monasticism that defined them as a separate ethnocultural entity. And here in the twenty-first, an American writer struggles with how best to communicate the necessity of these masterworks in an era itself going mad. He looks at the news and sees disturbing parallels between their three times—the first working in the shadow of Tatar invasion, the second Khrushchev suppression, the third Trumpian degradation. Yet the writer must continue, if not for the sake of the art, then for the sake of his own sanity.

He recognizes Andrei Rublev as one of the greatest works of art ever made about another artist, a fact made all the more stunning by its insistence on not showing its titular artist at work. With the exception of a brief epilogue displaying his surviving paintings (the only sequence shot in color), none of Rublev’s work is actually shown. As Tarkovsky explained in a 1962 issue of Soviet Screen: “I am interested in the theme of the artist’s personality in its relationship to his time. The artist, on the strength of his natural sensitivity, is the person who perceives his epoch most profoundly and reflects it most fully.”

Stretching from 1400-1424, we see said era as Rublev would have: one racked with violence and carnage as the increasingly autocratic Moscovian boyars warred with the decreasingly stabilized Mongol-Tatar Golden Horde. 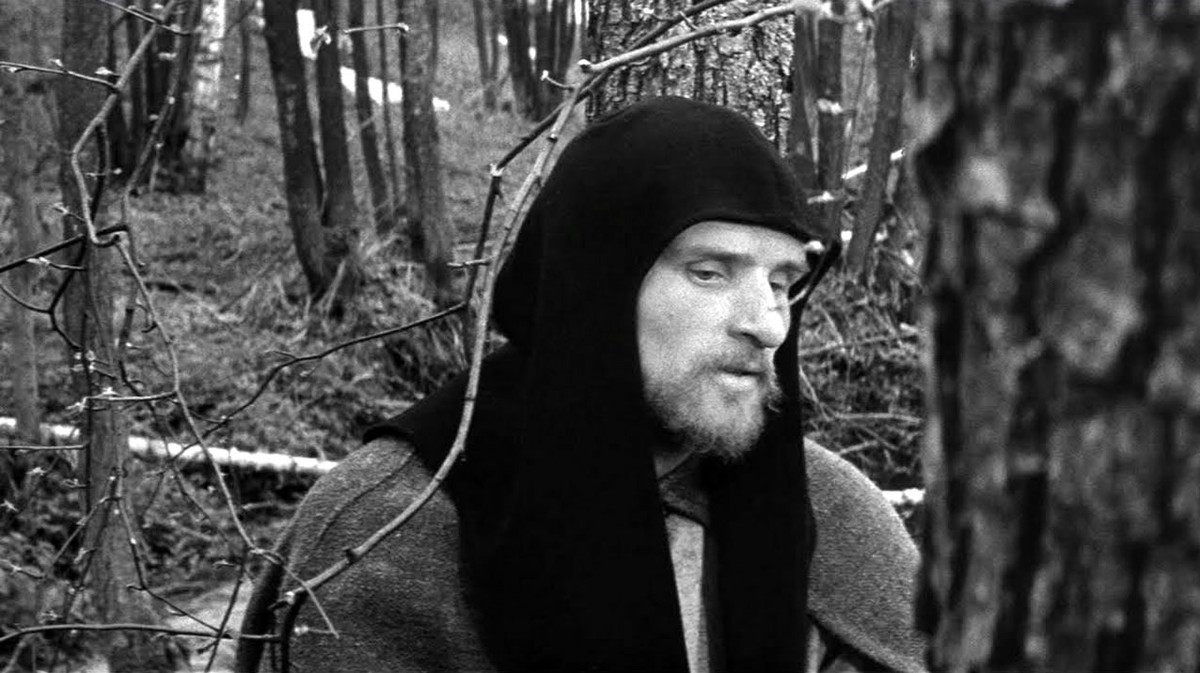 As a young man, Rublev is eager and idealistic in his artistic pursuits, particularly after being chosen as apprentice to legendary icon painter Theophanes the Greek. But after being hired to provide the decorations for a church in Vladimir—the city that once served as Russia’s capital—he’s seized with artist’s block. The wealthy commissioners want a fresco of the Last Judgement, of sinners being cast into the fires of hell. But looking around at the muddy, starving serfs tormented by invasion and famine, Rublev can’t bear to emphasize such suffering. Shortly afterwards, the city is raided by Tatars led by the Grand Prince’s power-hungry brother. As the city burns around him, Rublev kills a soldier attempting to rape a feeble-minded young woman named Durochka revered by the community as a holy fool. Horrified by the carnage and his own sin of murder, he takes a vow of silence. It’s only several years later when he witnesses a brash young bell maker risk his life to cast a massive silver bell for the Grand Prince does Rublev break his vow and decide that the act of creation is itself a worthy pursuit, even if it ultimately proves a pointless one in the unstoppable march of time.

The writer sits at his laptop and considers Tarkovsky’s methods in bringing this story to life, particularly his dogged determination to isolate Rublev from the very history he so meticulously struggled to recreate. After receiving approval from Mosfilm to make a biography on Rublev’s life, Tarkovsky and co-screenwriter Andrei Konchalovsky spent years researching medieval history and art before spending a ruble. After Soviet authorities approved the screenplay, props and costumes were created for hundreds of extras for sequences shot on location in historic monasteries and villages, including a massive invasion sequence where soldiers on horseback sack and pillage a populated city. Yet Tarkovsky and Konchalovsky avoided strict historical verisimilitude. In the aforementioned Soviet Screen interview, Tarkovsky explained:

“We are not interested in stylizing the epoch with costumes, furnishings, and the characters’ conversational speech. We want our film to be contemporary…the historical accessories must not fragment the viewer’s attention, and we must not worry about persuading them that the action is taking place precisely in the fifteenth century.”

Indeed, the writer reflects, the film only seems to insist on the historical details of Rublev’s world when it considers its art, such as a gorgeous scene where a rival painter stands in the shadow of one of Theophanes’ massive portraits of Jesus or a shot where Rublev cleans a half-burnt icon of St. George slaying the dragon. Everything else seems like so much insignificant window dressing. For Tarkovsky, it matters that people lived, worked, and died in this world, but not necessarily how they managed it.

So too does Tarkovsky play fast and loose with the historical details of Rublev’s life. Since so little is actually known about it, some artistic license was expected. But Tarkovsky boldly mixed legend with fact to create a Rublev who couldn’t have historically existed. Consider the prologue—a retelling of a Russian fable about a peasant who sewed a mound of furs together to create the first hot air balloon, ecstatically flying over the countryside before crashing to his death. An obvious tall tale—although one Soviet authorities eagerly promoted as fact to legitimize Russia’s claims of having invented manned flight—it to create in a world determined to destroy them. By sharing this glimpse of Rublev’s world, Tarkovsky has told us more about his life and work as an artist than any look into his childhood and upbringing could.

With Andrei Rublev, Tarkovsky created a work as essential to Russian culture as the painter’s icons—indeed, it’s been heralded as the USSR’s first and only film to portray Christianity as a civilizing, central element in Russian history and identity. But the American writer also sees a film of love and admiration, one fueled by awe and recognition from one genius to another. Did Tarkovsky see in Rublev a brother-in-arms against the forces that would smash artists to the ground like so many flying peasants? Perhaps. Why else would he make a film about a Christian monk while largely ignoring the actual religion he devoted his life towards? Still, the writer knows he’ll never write a piece as lovely as a Rublev icon or as stirring as a Tarkovsky film. But he takes comfort in the thought that if he does his job well enough, he can connect at least one more person to these great artists whose work echoes down through the ages and beyond them. Tyrants can murder artists and destroy their work, but they cannot kill their stories. They are eternal.

ANDREI RUBLEV has been re-released on Blu-ray by the Criterion Collection. This new edition is a must-have for serious cinephiles as it contains both Tarkovsky’s preferred 183-minute cut and the original 205-minute cut entitled THE PASSION ACCORDING TO ANDREI.