My mom’s first experience with The Beatles was like most people of her generation; her first glimpse of the mop-topped foursome was on February 9, 1964, on America’s favorite Sunday night pastime, The Ed Sullivan Show. Mom was only nine years old and hadn’t heard The Beatles’ music, and wasn’t even quite sure who they were, but the two-set spotlight on Sullivan was enough to excite her. Her friend Jeannie called her on the phone in advance of the Sullivan episode and told her she just had to watch this amazing band. Jeannie, likely telling my mom, “They’re cute! They dress alike, and have these adorable haircuts…and they talk so different!” Jeannie was the same age as Mom, but had siblings much older than her, so she knew about the band because of them. Taking her friend’s advice to heart, Mom made sure to tune in for The Beatles’ performance. As soon as Paul sang those first few words from “All My Loving,” the young girls on television and at home collectively lost it. Moved by the spirit, Mom began flailing her arms and kicking her legs. In her frenzied state, she failed to notice that one of her shoes was dangerously close to flying off her foot. Next to the chair she was sitting in sat her mom, my dear Granny, undoubtedly smoking a cigarette with the ash perfectly curled on the end, with a cup of coffee perched on the flat wooden arm of the sofa. (Apparently my grandparents always had a pot of coffee on and drank the stuff around the clock.) Mom continued to kick her feet until her shoe flew off her foot, hitting Granny’s full coffee cup, causing it to fall and shatter all over the floor. According to Mom, my Granny thought the whole situation was a hoot, which sounds about right.

That was just the beginning of Beatlemania for my mom. She and Jeannie each “married” their favorite Beatle. Actually Jeannie snagged Paul first, so Mom moved on to George. They each had a kid, with names like Paulette and Georgina. Mom bought loads of teen magazines filled with full page photos she could hang on the wall. A few months after that initial appearance on Sullivan, in July 1964, The Beatles released their first feature-length film, A Hard Day’s Night. Mom went to see the movie with Jeannie at the Rogers Theatre in downtown Chattanooga, Tennessee. The Rogers, which opened in 1951, had over a thousand seats and was the first in the city to not have a balcony. In a sold out theatre, packed with young girls, my mom spent the next 90 minutes screaming her head off. The whole event played more like a concert than a movie. She was completely enthralled, but in her own words, “I couldn’t tell you what that movie was about if my life had depended on it.” The only thing she could attest to was that “all of them were just so stinkin’ cute.” It wasn’t until twenty-five years later that my mom actually watched A Hard Day’s Night, and that was when she sat down with me for my first viewing.

The first time I watched the film, I have to admit I wasn’t completely sold. I was probably eleven or twelve at the time, and I shamefully balked at anything in black and white, unless it was old episodes of The Andy Griffith Show. Sure, I loved the music and seeing the Fab Four in their original Beatle environment, but I just couldn’t understand the story. Or the humor. I preferred the utterly ridiculous Help! (which I still love, albeit for different reasons now), also directed by Richard Lester, but in glorious, crisp color. I think I preferred the obvious separation of personalities with each of the four, in contrast to the more subtle approach in A Hard Day’s Night. I also didn’t quite understand the humor behind the gentle mocking of the Beatle devotees and their crazed behavior. It wasn’t until I revisited the film in my twenties, and then again around its 50th anniversary in 2014, that I finally appreciated its dry, subtle wit and outstanding performances from not just John, Paul, George, and Ringo, but the incredible supporting cast, including Wilfrid Brambell (“He belongs to Paul”); Norman Rossington; John Junkin; and my absolute favorite, Victor Spinetti, who, along with that itchy-looking, hairy sweater, wins all the awards for MVP. For the 50th anniversary, I attended the world premiere restoration of A Hard Day’s Night at the TCL Chinese Theatre at the 2014 TCM Classic Film Festival. A group of my closest friends and I sat together, dead-center in that stunning theatre, bathing in the crisp, beautiful black and white cinematography of Gilbert Taylor (Dr. Strangelove, Repulsion, Frenzy, The Omen, Star Wars: A New Hope). I noticed little things about the film that I never had before, like Ringo sitting in the studio’s commissary reading a trade paperback copy of An Anatomy of a Murder, complete with the Saul Bass poster cover from the 1959 Otto Preminger film starring James Stewart. A hilarious bit, especially in conjunction with Paul’s grandfather filling Ringo’s head with nonsense, ultimately leading the drummer off on a quiet, leisurely walk through London…within a few short hours of the band’s live broadcast. Of course, let’s not forget the music, the majority written by songwriting partners John Lennon and Paul McCartney. From the title track; to the upbeat “I Should’ve Known Better” sweetly serenaded to a group of school girls in a giant cage on a train (including George Harrison’s future wife, Pattie Boyd); to the pure happiness of the proto-music video “Can’t Buy Me Love,” my friends and I found it impossible to sit still in our seats. We didn’t scream our heads off like those girls at the Rogers Theatre in 1964, but we sang along and clapped nonetheless. Although we can never replicate the special Beatlemania era, knowing about my mom’s experience as a little girl made mine all the more special. 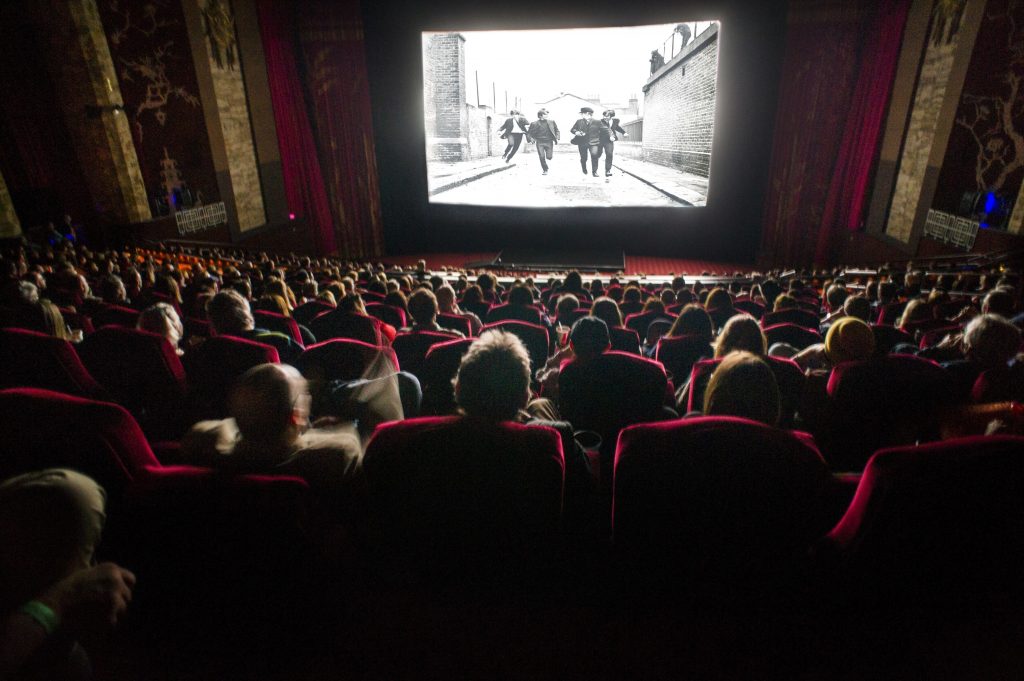 Upon its release, A Hard Day’s Night received both critical and audience praise. The film, which gives us a glimpse of the typical crazy day in the life of a Beatle, also earned two Academy Award nominations: one for original screenplay, the other for ‘Fifth Beatle’ George Martin’s musical score. In recent years, A Hard Day’s Night has welcomed much deserved recognition as a clever, brilliantly written and directed cinematic masterpiece, not to mention establishing the prototype for both the rock and mock documentary styles. A Hard Day’s Night is also original reality programming, giving audiences in 1964 a cleverly edited, if slightly exaggerated, sneak peek into the lives of their favorite musicians. Audiences also caught a glimpse of themselves, those rabid, screaming fans chasing the Fab Four down the street, and it just made them love The Beatles even more. 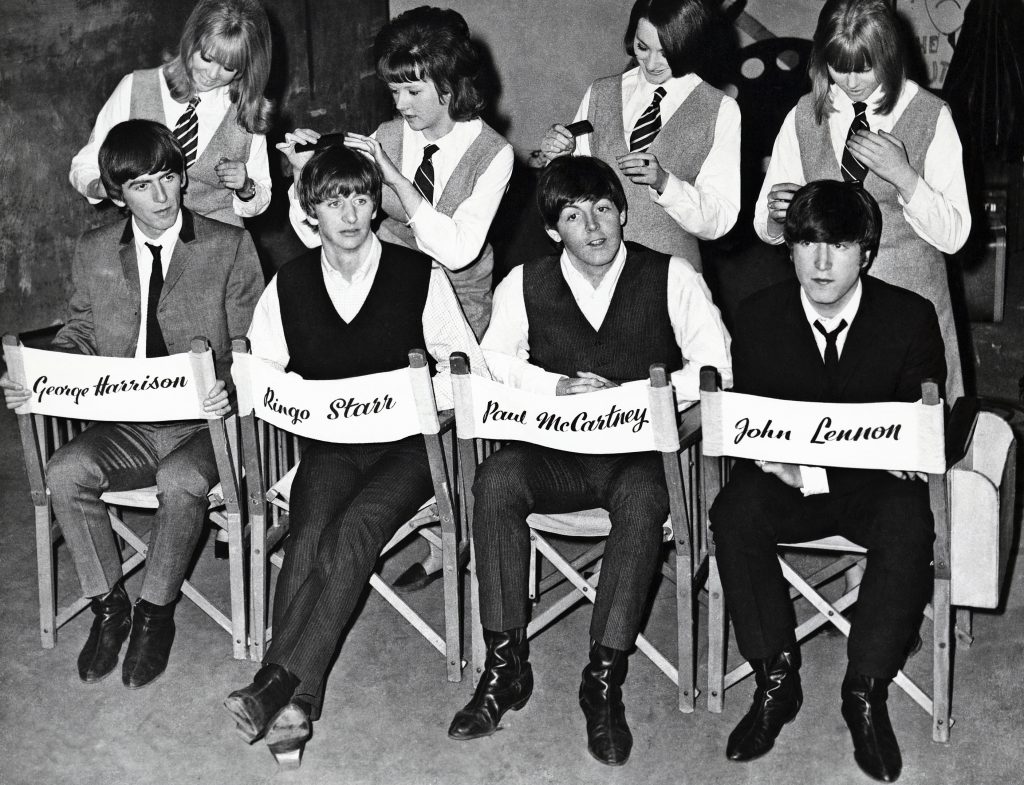 Today, Beatlemania has a different meaning. Unlike 1964, we are under a constant barrage of celebrity gossip, viral cat videos and any number of distractions that barely hold our already-strained attention spans. I was worried that when I started introducing my now six- year-old daughter, Ellie, to The Beatles’ music, she would be unimpressed. How could something so seemingly simple still be relevant? Would being two generations removed from this phenomenon still have an impact on a kid who has everything at her fingertips? Her response was heartwarming; she almost immediately immersed herself in their music, asking for books about them, posters and calendars for her walls and video clips of their performances. Ellie sat in my lap as we watched A Hard Day’s Night together, and although I know she didn’t understand much of the humor (John sniffing the Coca-Cola bottle, George’s sarcastic observations on ‘fresh’ marketing strategies and Ringo’s precariously placed selfie camera falling off the rock into the pond, etc.), she thoroughly enjoyed the sight gags, their matching suits and of course their music. Although, thankfully, she’s not screaming and clawing her face off in a frantic, blissful lust over a group of adorable, identical-looking guys, Ellie’s appreciation isn’t any less than my mom’s when she was nine, or mine when I was eleven. While the mania has been tempered over time, The Beatles, their music, movies and the fascination that accompanied it over fifty years ago have endured.

This piece was originally published at StreamLine, the official blog of FilmStruck on November 5, 2016 and can be found archived here. 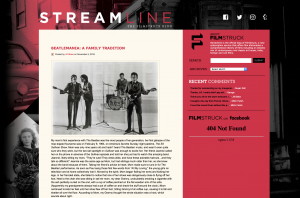