When I was pregnant with my daughter, I made a promise that I would share my love of music and film with her. All throughout my pregnancy I cranked up the classic rock, 80’s alternative, James Brown and Frank Sinatra. My husband and I sat immediately behind Robert Osborne during a screening of Steamboat Bill Jr. at the final Robert Osborne Classic Film Festival held in Athens, Georgia. I saw a beautiful 35mm print of Singin’ in the Rain (1952), which is one of my daughter’s favorites, when I was seven months pregnant. I swear she was tapping along to “Moses Supposes.” I was watching Billy Wilder’s Sabrina (1954) and I went into labor just as Sabrina and Linus embrace one another on the ship. She obviously wanted to hold out to see who Sabrina ended up with. Ellie shares a birthday with Buster Keaton, October 4th, and the TCM Star of the Month at the time was my beloved Fredric March. And Ellie, short for Eleanor, is partially named after Eleanor Powell (with Roosevelt being the other namesake). We even joked that she looked like Guy Kibbee with her pudgy cheeks and bald head. This kid never had a chance.

Ellie is now six years old, and I’ve enjoyed sharing so many wonderful films with her. From MGM musicals and Powell/Loy, to screwball comedies starring Cary Grant, it’s exciting to see those films through her eyes. For a while, every time she got upset or scared she asked to watch The Best Years of Our Lives (1946), which she lovingly called “the airplane movie.” I get misty just thinking about it.

Over the past year or so, I’ve been slowly introducing Ellie to silent film, specifically comedies. She has seen a few Buster Keaton movies, such as The General (1926) and Sherlock Jr. (1924), some Laurel and Hardy shorts and select scenes from Harold Lloyd and Charlie Chaplin films. On our family movie nights, I often let Ellie decide what we watch, sometimes giving her suggestions based on movies she’s already seen and liked. Recently, Ellie and I watched Charlie Chaplin’s first feature-length film The Kid (1921), currently streaming on FilmStruck under The Masters: Charlie Chaplin theme. Other than seeing a couple of clips of Chaplin from The Gold Rush (1925), City Lights (1931) and Modern Times (1936), this was Ellie’s first real introduction to The Tramp.

Now, I will admit that I’m a sucker for a good sentimental story, and it doesn’t take much to make me cry. Yes, I’m that crazy lady in the theater who is always sobbing uncontrollably while clutching a box of Sno-Caps. When it comes to Chaplin, there’s absolutely no way that I’ll make it through dry-eyed. When it comes to Ellie and her reaction to emotional films, the apple didn’t fall far from the tree. When we sat down to watch The Kid, I knew we were in for a good crying jag.

From the very first scene, Ellie was completely transfixed. She wiped away a tear as The Woman (Edna Purviance), desperate and alone, gave up her newborn son. She laughed hysterically as The Tramp and The Child hustle to make money in their elaborate window repair scheme. She howled during the hilarious fight scene in the alley, but made sure to tell me that she knows that fighting is wrong. During the film’s famous scene when the Child is taken away from The Tramp (arguably one of Chaplin’s greatest moments), Ellie’s eyes welled with tears. After The Kid ended, Ellie sat quietly, still looking at the television. I asked her what she thought about the film, and she told me she loved it. She told me about all her favorite parts, with the dream sequence being her absolute favorite; “It’s just so silly, and exactly what dreams are like, sometimes.” Ellie had a few questions, too, mainly about orphanages and why The Woman felt like she had to give up her child. Those questions prompted me to ask her what she thought about The Child being taken away from The Tramp: “It was so sad. I don’t know why they would be mean and take him away. That’s his daddy.” After we discussed the film, Ellie enthusiastically stated that she can’t wait to watch more of Chaplin’s films. Oh, what beautiful words for this movie-loving mama to hear from her child.

There’s a common misconception that children will be bored with black and white and silent films, or that they can’t possibly understand something that was made so long ago. While no two children are alike, this couldn’t be further from the truth. If given the opportunity with carefully curated content and guidance, children can love classic film. Although they may not understand more complicated adult themes or cultural references of the period, there’s almost always something that’s easy and accessible. Ellie didn’t understand the cultural significance of the unwed mother in The Kid, but she understood the mother’s sadness. She understood The Tramp’s love for his adopted child, acknowledging that family can be different things to different people. Now more than ever, it’s important to link new generations to the past. In the last couple of decades, we’ve seen a generation slowly disappear, cutting off our direct connection to these early films. I’m doing my part to make sure that a love for classic film is alive and well in my daughter. I encourage all of you to do the same.

This piece was originally published at StreamLine, the official blog of FilmStruck on January 28, 2017 and can be found archived here. 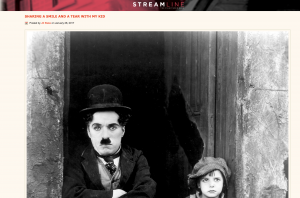 Stream of Consciousness Comedy: The Forgotten Wonderland of Musty Suffer

His face is unknown, his name peculiar, and his comedy style utterly foreign to modern eyes. The “he” in question? The mind-bending Musty Suffer; a silent comedian who has to be seen to be believed. […]

Hitchcock: The Silent Years (Part One)

By Drew Morton Being a Film Studies academic can be a blessing and a curse.  It’s a blessing because I’m fortunate enough to get paid to teach film history and popular culture courses and to […]