When I decided to write about Billy Wilder’s Irma La Douce (1963) for this week’s StreamLine piece, I originally intended to argue on the film’s behalf. In discussions of “lesser Wilder films” Irma La Douce is guaranteed to be on the list, arguably one of Wilder’s most baffling creations, along with The Spirit of St. Louis (1957), which I’m convinced Wilder made solely so he could direct James Stewart in something. Not that I blame him one bit. As an aside, I’d like to note that Wilder made three films in 1957: the aforementioned biopic with Stewart, Love in the Afternoon with Gary Cooper and Audrey Hepburn and Witness for the Prosecution with Marlene Dietrich, Tyrone Power and Charles Laughton. An incredible feat, even for a master like Billy Wilder. But back to Irma La Douce: I’ve staunchly defended the film on more than one occasion, having mainly fond memories of the zany, haphazard plot. I’m a huge fan of Wilder’s Kiss Me, Stupid (1964) and I ride-or-die for the much-maligned Avanti! (1972). Irma La Douce has always fit nicely alongside the two in the “Billy Wilder films that Jill loves for some insane reason” category. I recently revisited all three, hoping to come away with renewed appreciation so I can continue to fight on their behalf with my fellow impassioned film obsessives. While Kiss Me, Stupid and Avanti! retained their delightful magic, Irma La Douce disappointingly fell short. Very, very short. The film is a belabored, confusing collection of all the things that should work, but don’t. Oh how it pains me to finally admit it. And yet, I still find myself making excuses for this fiery train wreck of drunken Maltese pups, emerald green stockings and bad British accents.

Just three years after the successful collaboration between Billy Wilder, his frequent writing partner I.A.L Diamond and stars Jack Lemmon and Shirley MacLaine on the masterful, award-winning The Apartment (1960), Wilder and company stuck with their successful formula and cast the cinematic sweethearts in a non-musical film adaptation of the French musical Irma La Douce, written by Alexanders Breffort and Marguerite Monnot. Everything about Irma La Douce should work together: a solid adapted story; Wilder and Diamond’s trademark witty, satirical dialogue soaked in double entendre; MacLaine’s sweetly innocent sexual appeal; Lemmon’s equally innocent sexual appeal in that “cute as a speckled pup” kind of way, along with the hilarious blurred lines between dual personalities; a Parisian setting, however far from the glistening Champs-Élysées; and strong, clever supporting characters in Lou Jacobi, Cliff Osmond (a personal favorite), Joan Shawlee and Howard McNear— all worthy of individual recognition and praise. All of these components should make for a damn-near perfect film, if a quirky one. The Apartment is a meticulously perfect film, hitting every single note just right. Quite possibly Wilder’s greatest achievement in a long, celebrated career filled with greatest achievements. Even with the best, it’s nearly impossible to catch lightning in a bottle twice. Irma La Douce is a freak lightning storm that strikes an unsuspecting field of sheep, killing them instantly. Alright, maybe a slight over exaggeration. 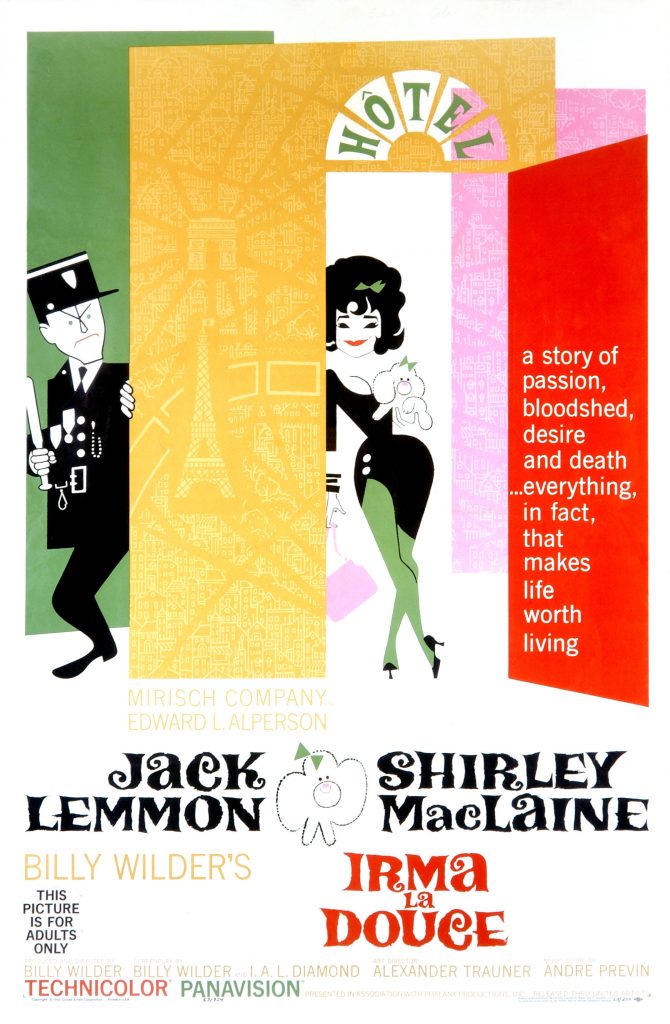 During the peak enforcement of the Motion Picture Production Code from 1934 until 1968, filmmakers, writers and actors were challenged to creatively skirt restrictions. As frustrating and pointless as the Code was at times, it inspired over two decades of clever, subversive, artistically brilliant content that rivals much of Hollywood’s current output. Once the Code began to crumble, somewhere around 1959, filmmakers really tested the limits of so-called decency and taste, and as a result created some of cinema’s finest examples of masterful filmmaking. With that freedom, though, came a bit of laziness, for lack of a better word. Cruder jokes, swearing, sex, nudity and violence became more prevalent, even when not necessarily the best choice artistically. During the transition from old Hollywood to new, few filmmakers successfully made the transition to this more brazen style of filmmaking. Alfred Hitchcock appeared to thrive in this newly found freedom, exploring more graphic, adult situations beginning with 1960’s Psycho, and even more so with the disturbing Frenzy (1972). Wilder thrived, too, and can be largely credited with those initial cracks in the Code with 1959’s Some Like it Hot and The Apartment the following year. Yet despite his role in changing what was considered acceptable (with satisfied audiences and critics to support him) and doing so most cleverly, Wilder sometimes relied too much on easy gags and shocking dialogue seemingly just for the sake of it. This is clearly evident in Irma La Douce, a film that has a “damned if you do, damned if you don’t” vibe. It’s highly unlikely Wilder could’ve made the film earlier in his career due to the nature of the story (a funny, heartfelt look at the life and loves of a sweet, highly successful prostitute, and the relationships with her various pimps), and by the time he could make it those frustrating, yet creativity-inspiring restrictions were all but gone. This allowed for Irma La Douce to be made, but lacking the signature Wilder magic found in many of his post-war films. Perhaps if Wilder had made Irma La Douce a few years later, when the novelty of pushing past boundaries began to wear off, it might’ve had a different result. 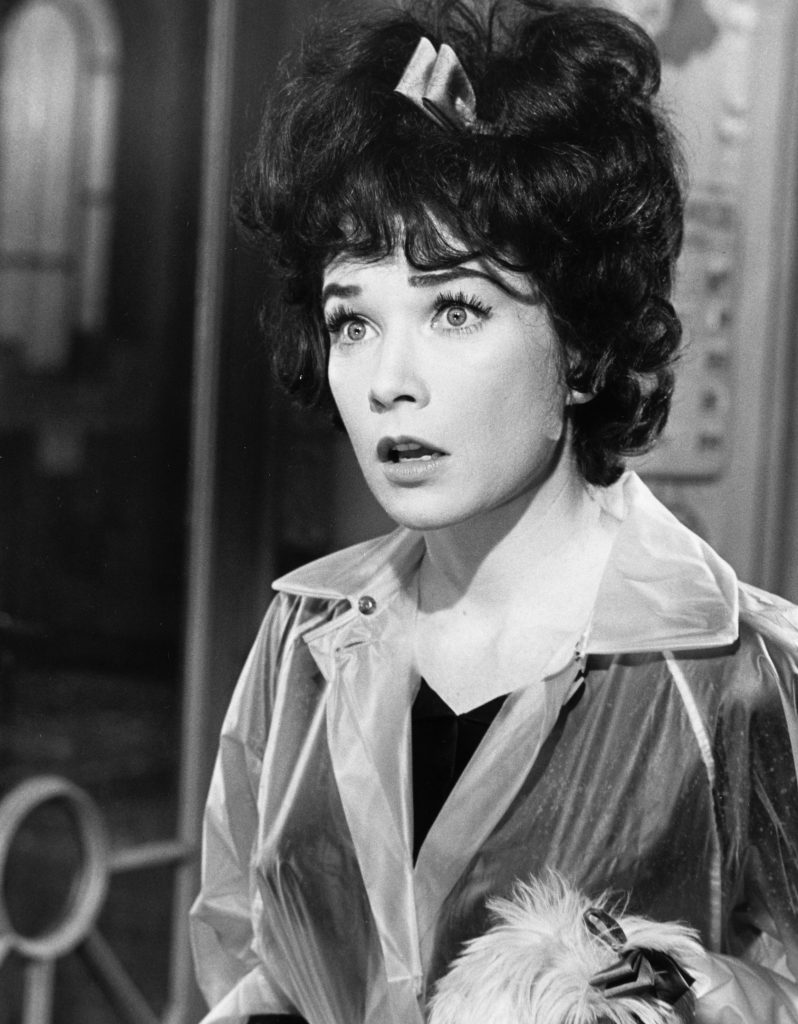 All of that aside, Irma La Douce’s biggest problem is in its seemingly endless runtime. Clocking in at two hours, twenty-seven minutes, the film begins to painfully lag by its second act. At this point it becomes apparent that Irma (MacLaine) and Nestor’s (Lemmon) story is far from over, fatigue sets in. In its final act, Irma La Douce throws it all away (whatever “it” is I’m still trying to figure out) for an incredibly sloppy, pointless screwball ending that I’m still scratching my head over many days later. The film channels Preston Sturges with its quick, silly and chaotic finish, except it’s not even remotely funny. 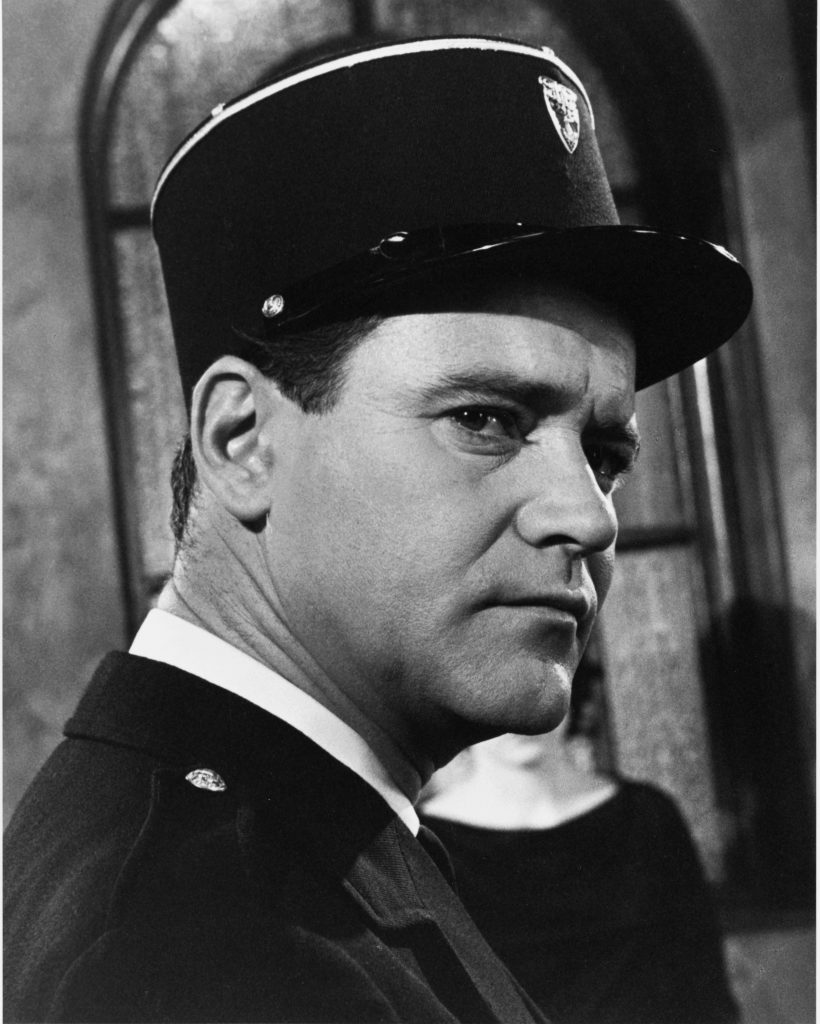 I’ve seen most of Billy Wilder’s filmography, and while I agree the vast majority of his best work is post-WWII up to The Apartment, Wilder’s later career is fascinating and there are some true gems. (Fedora, anyone?) My recent date with Irma La Douce didn’t go as planned, but who knows: maybe next time I’ll fall in love with it all over again. I have a serious soft spot for many of these so-called “second-tier Wilder” films, like so many of my fellow Wilder-fanatics. “Because second tier Wilder is still better than most other films” – Anonymous, i.e. every Billy Wilder fan ever.

This piece was originally published at StreamLine, the official blog of FilmStruck on February 11, 2017 and can be found archived here. 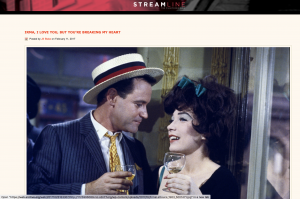 If I had to pick a single theme to characterize Billy Wilder’s work, it would be the individual trapped by unusual circumstances. Sometimes his protagonists would fall victim to traps set up by society (the […]