In the supernatural comedy I Married a Witch (1942), director René Clair serves up an irresistible potion consisting of revenge, sex, politics and romance. Based on the novel The Passionate Witch by author Thorne Smith, I Married a Witch stars Fredric March and Veronica Lake, an unlikely romantic leading couple if there ever was one. From the significant age gap between March and Lake, to tales of feuding and unprofessionalism on the set, to irreconcilable creative differences amongst the directorial and production staff, not to mention threat of censorship, the legend surrounding the troubled production has only added to the delightful curiosity that is I Married a Witch.

The vast differences in Fredric March and Veronica Lake’s acting styles were a major point of contention on the set of the film. March viewed acting as a serious, delicate balancing act consisting of both precise execution and consummate professionalism, no matter the role. Although he enjoyed the benefits of Hollywood stardom, particularly as a matinee idol and leading man at Paramount Studios during much of the 1930s, March knew the popularity of a star was often fleeting. For him, acting was a serious profession, with its many ebbs and flows, great successes and terrible mistakes. He also knew that a leading role was not always the best one or even a good one (as evidenced by many of the throwaway ones early on in his career), and gladly chose strong supporting roles, often with lower billing, with no concern for the flashiness of stardom. Later on in his career, March made some bold choices with films such as the then-controversial An Act of Murder (1948), Man on a Tightrope (1953), The Desperate Hours (1955) and Middle of the Night (1959), stretching way beyond the glossy image created for him when he was first under contract at Paramount.

On the other end of the acting spectrum was Hollywood newcomer Veronica Lake, the petite blonde with the trademark peekaboo hairstyle. After a handful of bit parts and uncredited roles, Lake hit the jackpot costarring alongside Joel McCrea in Preston Sturges’s 1941 comedy Sullivan’s Travels. Due to the success of Sullivan’s Travels and her newly discovered star status, Lake was later paired with Alan Ladd, a perfect match in both looks and stature, in the film noir This Gun For Hire (1942), thus cementing one of Hollywood’s most iconic on-screen partnerships. Most certainly a celebrity first, Lake was one of the best products to come out of Hollywood’s star machine. Her “look” was an inspiration to the fashion industry and American women, and she provided a much-needed distraction from the unfolding events surrounding WWII, becoming a popular pin-up with servicemen overseas. Lake was more manufactured image than actor, and like so many before and after, her star burned fast and hot, unable to sustain itself for more than a few years. This meteoric rise was short lived; Lake was a victim of both Hollywood’s penchant for typecasting and her rumored self-sabotaging behavior, which was most likely the result of serious mental illness and alcoholism. Although many didn’t consider her to be a serious actor, including several of her co-stars and directors, Lake was a success.

While both the established actor and rising star are key ingredients in Hollywood’s trademark movie magic, the combination doesn’t always get along. Preston Sturges originally signed on to produced I Married a Witch, and asked Joel McCrea to reunite with his Sullivan’s Travels co-star. McCrea declined starring alongside Lake, citing their difficult working relationship, prompting Sturges to offer the role to veteran actor Fredric March. Unlike McCrea, March was slightly past his romantic leading man prime, and probably wasn’t the best fit for the youthful Lake, who was a mere 20-years-old. In addition to the peculiar casting was Sturges’s exit from the production due to serious creative differences with director René Clair. Dalton Trumbo, who was originally hired to work on the adapted screenplay, also clashed with Clair, ultimately quitting the film. To add insult to injury, March and Lake despised one another. This merging of established actor of stage and screen with overnight Hollywood success created one of the most infamous behind-the-scenes feuds in Hollywood. March thought Lake to be childish and unprofessional, and Lake considered March a pompous ass. Both were probably correct in their assessments. March was known for his no-nonsense approach on set, which was a result of his stage career. According to production notes, Lake was often late to set, due to a variety of reasons ranging from long delays in hair and make-up to three hour lunches. She also disliked multiple takes, often refusing to do them, which did not sit well with an actor accustomed to extensive rehearsal and perfection. March supposedly referred to the film with his friends as “I Married a Bitch,” a rather convenient, low-hanging insult. While Lake was notoriously difficult, March was not without his faults. Some claimed he was a notorious womanizer, others, like frequent co-stars Claudette Colbert and Sylvia Sidney, said he was “all-hands.” While it doesn’t appear to be that he treated Lake in this manner, she was definitely aware of his rumored behavior and it affected their working relationship. He also unfairly criticized Lake, implying that she was more beauty than brains, a theory that followed Lake for much of her career. Much of the criticism Lake received was tinged with sexism, a serious problem in Hollywood that unfortunately hasn’t gone away.

Despite March and Lake’s differing backgrounds, work ethic and personalities, they were able to make their on-screen romance a believable one. They actually have chemistry, which is an astounding feat considering the brutal pranks and insults flying off-camera. The magic we see in I Married a Witch is not in the romantic pairing of the supernatural with mortal man, but in the successful collaboration between fire and ice.

This piece was originally published at StreamLine, the official blog of FilmStruck on February 25, 2017 and can be found archived here. 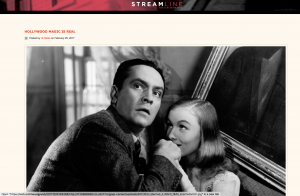