As I prepare for this year’s TCM Classic Film Festival in Hollywood, I am revisiting the films of some of the actors and actresses whose work is being featured at the annual event. With a wide variety of events available at each time slot, it’s impossible to attend all the screenings, special presentations and interviews that I’d like to see. I don’t have any complaints, though, as there’s rarely a bad choice to be made. Like in years past, there will be a silent film presentation with live accompaniment. In previous years, I’ve seen Girl Shy (1924), The General (1925) and City Lights (1931). This year, the TCM Classic Film Festival is featuring Harold Lloyd’s 1928 comedy Speedy with live accompaniment by the extraordinary Alloy Orchestra. Any event featuring the Alloy is not to be missed, so I will be enthusiastically lining up for this screening on the closing night of the festival. Since I don’t want to watch Speedy this close to seeing it in a theatre with an appreciative audience, I decided to revisit some of Lloyd’s other work in preparation. Although I much prefer Lloyd’s feature-length films such as Safety Last (1923), Why Worry? (1923), Girl Shy (1924) and The Freshman (1925), I’ve selected three of my favorite short films featuring Lloyd that are currently available on The Criterion Channel of FilmStruck. 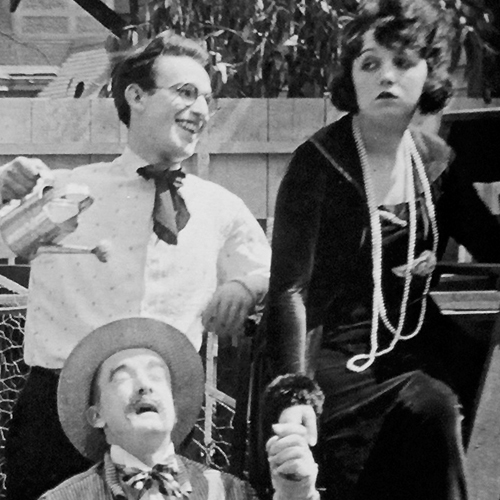 At a running time of nine minutes, Just Neighbors (1919) is a fast-paced story featuring two sets of neighbors and the hilarious obstacles they face while building a shed for their garden. Although there are many humorous gags in this short, including several with a fairly acrobatic dog and a pair of chickens, my favorite moment is when Lloyd’s “The Boy” character has difficulty lining up to buy his ticket for the train ride home. Through the frantic hijinks and slapstick gags, the garden is destroyed and the once-friendly neighbors turn on one another. A dangerous moment brings the neighbors back together, rekindling their friendship. Just Neighbors is one of a handful of films that Lloyd directed himself and received credit. 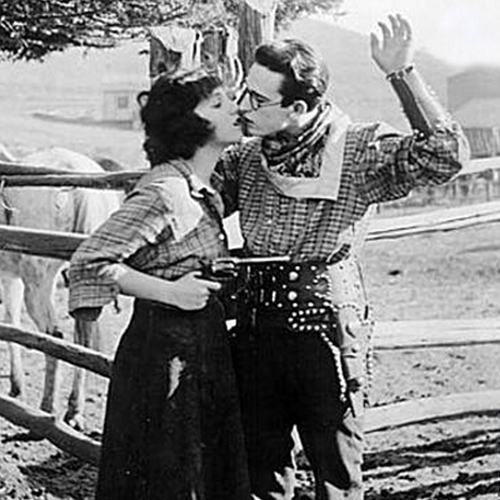 Billy Blazes, Esq. (1919), directed by Hal Roach, is one of Lloyd’s oddest shorts. This spoof on the western genre sets the tone with an absolutely hysterical title card: “Far out on the silent prairie—the mining town of Peaceful Vale—nobody has been killed here for almost twenty minutes.” Billy Blazes (Lloyd), the unassuming, bespectacled hero of the story, is first seen on a rocky hillside with his trusty horse. Blazes is a quick draw and he can somehow roll a perfect cigarette by shaking the paper and loose tobacco in his hand. (He later shares this impressive trick with a young child, which is possibly the most hilarious bit in the entire short.) Billy Blazes was definitely outside of Lloyd’s normal “glasses character” and probably not his best characterization, but I really enjoy the departure from Lloyd’s usual. A couple of years ago, the Fabulous Fox Theatre in Atlanta presented a collection of silent comedies, including Billy Blazes, Esq. Most of the audience was there to see the more well-known shorts starring Laurel and Hardy and Buster Keaton. Surprisingly, Billy Blazes, Esq. got some of the biggest laughs. 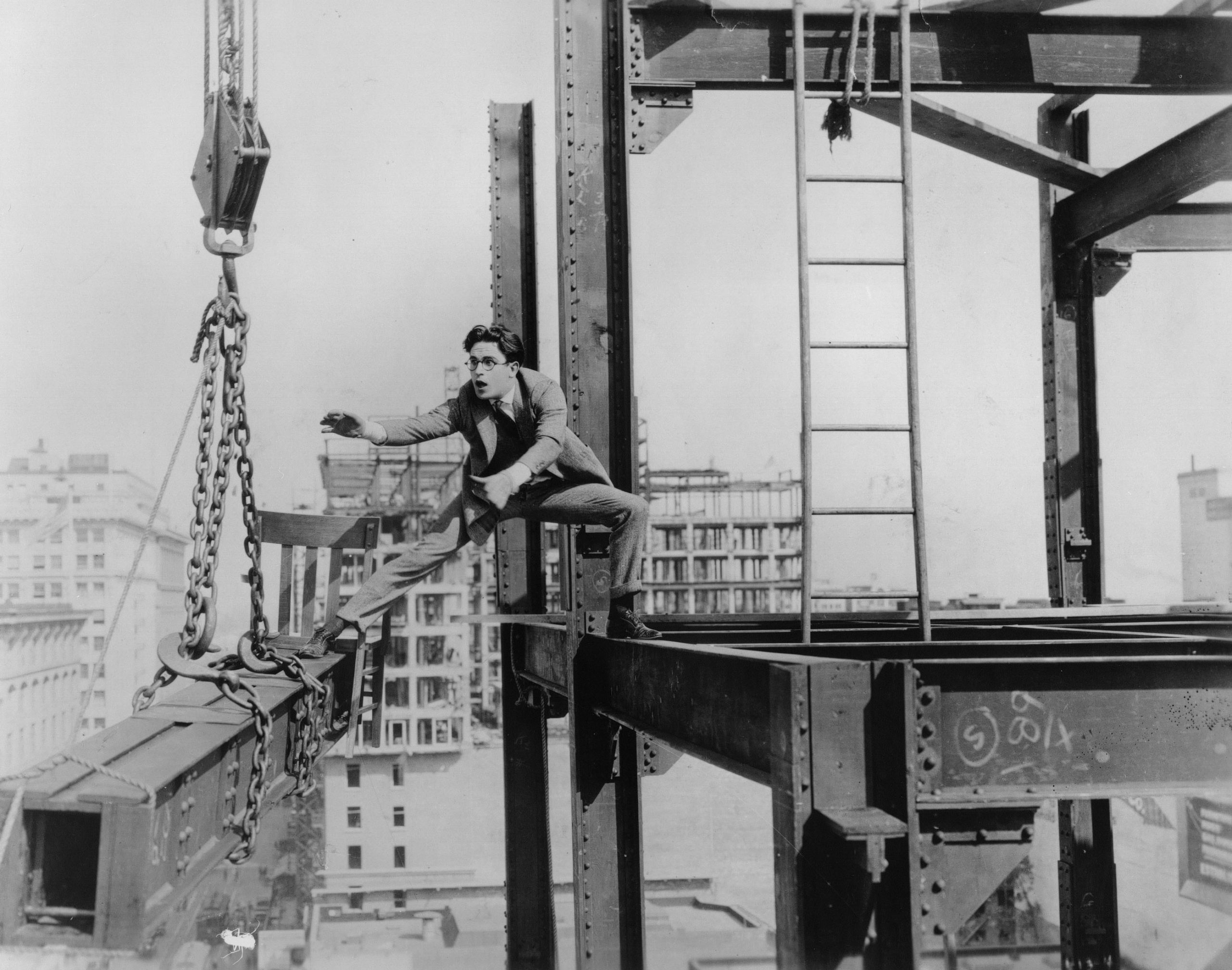 Never Weaken (1921) directed by Fred Newmeyer and starring Harold Lloyd and Mildred Davis (who would later marry Lloyd in 1923), is Lloyd’s final short and quite possibly his best. Through a simple misunderstanding, Lloyd’s “The Boy” character assumes his girlfriend “The Girl” has promised to marry another man. After setting up an elaborate method to commit suicide (and hilariously failing), The Boy finds himself in one dangerous situation after another. Clumsily making his way through a partially built construction site, The Boy has a series of near misses that are both thrilling and terrifying. Although he had yet to reach his creative peak, Never Weaken gives us a glimpse of the genius stunt work and visual effects that would later be showcased in the 1923 film Safety Last. Not only is Never Weaken one of Lloyd’s greatest achievements, but it’s one of the greatest comedic shorts of all time.

While Harold Lloyd isn’t as well known (at least amongst the general public) as other silent comedians such as Charlie Chaplin, Buster Keaton, Stan Laurel and Oliver Hardy, he did enjoy quite a bit of financial success with his feature-length films (with some even exceeding Chaplin’s work). Lloyd also took extraordinary steps to preserve his legacy, which he entrusted to and is faithfully guarded by his granddaughter, Suzanne Lloyd (who will be in attendance at the screening of Speedy at this year’s festival). And despite a horrific fire in one of Lloyd’s personal film vaults in 1943 that destroyed a significant portion of his collection, many of Lloyd’s films have been restored under Suzanne Lloyd’s supervision. Out of all of Harold Lloyd’s short films, which are your favorites? Where do you think he ranks alongside other notable silent comedians?

This piece was originally published at StreamLine, the official blog of FilmStruck on April 1, 2017 and can be found archived here. 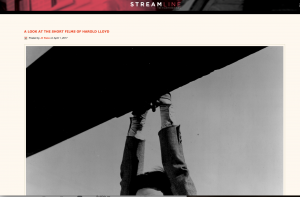 My First Date with Douglas Fairbanks

A few years ago I attended a very special screening at Atlanta’s Fox Theatre: 1920’s The Mark of Zorro starring the original King of Hollywood, Douglas Fairbanks. Up until that point, I had never seen a Douglas Fairbanks film. […]