In 1961, legendary author and screenwriter Elmore Leonard released his critically-acclaimed modern Western novel Hombre, a story about a white man, John Russell, raised by Apaches and his eventual return to civilization, with its complex politics and rampant prejudice. Russell struggles with deep moral conflict and reluctance to live as a white man after witnessing the horrific treatment of the people who raised him as one of their own. Five years later, director Martin Ritt (The Sound and the Fury [1959], Hud [1963], The Spy Who Came in from the Cold [1965]), with an adapted screenplay by Irving Ravetch and Harriet Frank Jr., brought a faithful adaptation of Leonard’s story to the big screen in one of the greatest, underrated revisionist Westerns of all time.

While we’ve seen numerous Westerns address the “white person raised as savage” trope (John Ford’s The Searchers [1955] immediately comes to mind), Hombre(1967) handles John Russell’s story in a carefully nuanced, realistic way. Paul Newman is Russell, a man of few words, but when he speaks every single one of those words count. He’s also a man of great restraint and almost meditative-like calm, but it’s clear that Russell’s mind is constantly running, whether it’s working through the strategy of a counter-attack to an expected ambush, or sorting through the complicated motives of his bigoted and morally ambiguous traveling companions. After the death of his biological father, Russell inherits a somewhat rundown boarding house in town and a gold pocket watch. The tough-as-nails, world-weary Jessie Brown (the incomparable Diane Cilento), who manages the boarding house, tells him that it makes a comfortable profit with little investment, but Russell has no interest in keeping the house open. In a rather blunt manner, Russell informs her that he will be selling the house and doesn’t really care about displacing its residents, Jessie included.

Russell books a trip on a local stagecoach, driven by the Mexican Henry Mendez, played by Martin Balsam. (I have to point out that while Balsam cast as a Mexican is quite problematic, his performance is not only incredible, but largely avoids the racial stereotypes common at that time.) Mendez encourages Russell to leave his Apache life behind and assimilate back into the white world. And while Mendez’s advice to his friend is well-intentioned (there might even be a bit of jealousy, as Mendez would happily trade places with him), Russell is still very much connected to the Apaches, and he’s trying to find a way to use the advantages of his “whiteness” to advocate for them.

The stagecoach’s passengers are a motley crew, including Russell, the now homeless Jessie, a troubled newlywed couple (also residents of the boarding house), a federal Indian agent Dr. Alexander Favor (Fredric March), his proper wife Audra (Barbara Rush) and a tough bully Cicero Grimes (Richard Boone). Obviously, Elmore Leonard was heavily influenced by John Ford’s 1939 Western Stagecoach, with a group of people who, under normal circumstances, would never engage with one another socially or otherwise, but are forced to interact in cramped, stressful conditions. Not long into their journey, the rest of the passengers discover Russell’s Apache background and led by the bigoted Dr. Favor (who is much like corrupt banker Ellsworth Henry Gatewood in Stagecoach), they express their concern, asking for Russell to ride on top of the stagecoach with Mendez. Russell is angry, bitter and has emotionally distanced himself as much as he can from his fellow passengers. And rightfully so. When the stagecoach is under ambush, orchestrated by passenger Cicero Grimes and his partners-in-crime, the passengers attempt to make nice and turn to Russell for help.

What follows is a tense battle of morals and ethics between Russell and the passengers who cast him out based on their unfounded prejudices of him and his upbringing. And while Cicero Grimes and his bandits present the most immediate danger to Russell and the passengers, there are other, more subtle enemies poisoning their small group. Dr. Favor’s disgusting racism and immoral acts during his tenure as an Indian Agent is what Russell is ultimately concerned with, as his actions negatively impacted hundreds, if not thousands of Native Americans, many of whom Russell considers family. Jessie Brown is the only other passenger besides Russell who has any bit of common sense or moral center. She’s Russell’s opposite in many ways, but she understands him. When Russell is faced with a difficult moral dilemma—help the people who cast him out and abused the Apache people (Dr. Favor and his wife)—Jessie reminds him that, while his anger is understandable and justifiable, practicing “an eye for an eye” won’t bring him any peace, and will compromise the good within him. Jessie is the perfect counter to Russell, and in a tense moment where his calm is beginning to slip, she keeps him grounded. In another lifetime, or under different circumstances, Jessie and Russell would’ve made for a great partnership.

In the last year, Hombre received an impressive release on Blu-ray, bringing an underrated film back into the spotlight. With the film now streaming on FilmStruck, the prospect of it being discovered by new audiences is truly exciting.

This piece was originally published at StreamLine, the official blog of FilmStruck on April 8, 2017 and can be found archived here. 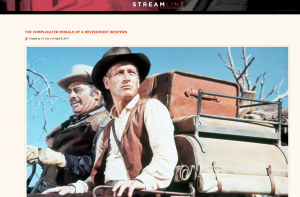