I’ll admit that I’ve always been fairly ambivalent toward actor Stewart Granger (or “the other Jimmy Stewart,” as I like to call him). I’ve never found him, or his films, particularly entertaining. Every once in a while, I’ll find myself in the mood for a fluffy romantic adventure flick like King Solomon’s Mines (1950) or Bhowani Junction (1956), but that’s usually the extent of my Stewart Granger tolerance. If I’m craving a swashbuckling matinee idol, I usually reach for the real deal: Douglas Fairbanks, Errol Flynn or Tyrone Power. And if I want a little extra sophistication with my swashbuckling, I go for the lush, velvet voiced Ronald Colman. Now, I don’t blame Stewart Granger for my lack of interest in his films. He has all the makings for a remarkable leading man: the requisite tall, dark and handsome physical characteristics; unwavering confidence; a proper British accent; cultured sensibilities; charismatic charm; and a healthy sexual appetite. (This is key for the so-called “bodice ripper” romance films.)

While he certainly had the look and necessary range for period films, a rarity amongst an abundance of more “contemporary” actors who really had no business stepping back in time (such as Grant, Bogart, Mitchum and Gable–with the exception of Mutiny on the Bounty [1935] and Gone with the Wind [1939], where Gable’s Mr. Christian and Rhett Butler are considered modern men for the time period), Stewart Granger wasn’t given the chance to showcase the extent of his talent. (Can you just imagine Mitchum in a powdered wig and silk brocade jacket? Hysterical.) MGM squandered Granger’s talent by casting him in a string of dull and bloated historical films. This typecasting was incredibly frustrating for the actor, negatively impacting the longevity of his career and making him quite cynical of Hollywood and filmmaking in general. During an interview, some years after the peak of his career, Granger offered a rather tough assessment of his Hollywood days: “Stewart Granger was quite a successful film star, but I don’t think he was an actor’s actor.” Despite his attitude toward Hollywood, Granger was quite proud of his work as an actor on the stage and in some of the films made in his native England.

When FilmStruck recently added a curated sampling of Stewart Granger’s early British films, including a moving tribute by his son Jamie (as part of the service’s original programming), I felt compelled to give the actor another chance. Out of the four films currently offered on the service, I had only seen one: the film adaptation of George Bernard Shaw’s Caesar and Cleopatra (1945). A fine film, but dominated by the powerhouse, scene-stealing leads Vivien Leigh and Claude Rains. The other early Granger films offered, The Man in Grey (1943) and Madonna of the Seven Moons(1945) (both part of the legendary “Gainsborough Melodramas”), features performances from Granger that were not only unexpected, but absolutely charming. But for me, his role as Count Philip Konigsmark in the Ealing Studios production of Saraband for Dead Lovers(1948), is Granger at his best. Not to mention one of Granger’s personal favorites.

Adapted for the screen from a novel written by Helen Simpson, Saraband for Dead Lovers takes place in Hanover during the 17th century. Sophie Dorothea (the luminous Joan Greenwood) is wed to the dreadful Prince George Louis (Peter Bull) in a move that will secure George Louis’s place on the British throne. Their marriage is one solely for politics, not love, and Princess Sophie Dorothea’s unhappiness, coupled with George Louis’s despicable behavior, leaves her isolated and depressed. Her one source of comfort and meaning in life is found in her two children, but when they’re taken out of her care by her cold, demanding mother-in-law, the Electress Sophia (Françoise Rosay), Sophie Dorothea is distraught. When introduced to the Swedish Count Philip Konigsmark (Granger), a master swordsman and renowned military tactician, Sophie Dorothea is immediately taken by his gentle charm, charisma and good looks—for which George Louis falls laughably short. Philip and Sophie Dorothea fall madly in love, but under incredibly dangerous circumstances. Not only do they fear the wrath of George Louis’s cruel temperament (who flagrantly engages in affairs with numerous mistresses, but mustn’t have an unfaithful wife), but they must deal with the threat of the conniving Countess Platen (a brilliant performance by the incomparable Flora Robson), Philip’s jilted lover.

While one can argue that Granger was typecast during his early film career in Britain, unlike his Hollywood career, the films made under Gainsborough and Ealing had a more authentic, genuine feel. The costumes and set design in Saraband for Dead Lovers are extraordinary—breathtaking, really— rivaling the best, most historically accurate Hollywood film counterparts. (Jim Morahan, William Kellner and Michael Relph received Academy Award nominations for Best Art Direction [color] for their efforts.) The stunning technicolor is somehow both vibrant and muted, creating an equally realistic and fantasy-like aesthetic. The cinematography by the legendary Douglas Slocombe, best known for his work on other Ealing Studios productions such as Kind Hearts and Coronets (1949) and The Lavender Hill Mob (1951), as well as The Lion in Winter (1968), The Italian Job (1969) and the original Indiana Jones trilogy (1981, 1984, 1989), is remarkable, and at times tense and haunting. In particular, Slocombe’s masterful work is demonstrated in a scene where the masked lovers Philip and Sophie Dorothea rendezvous in a dizzying, chaotic street festival.

When supported and surrounded by talent and authenticity, which is found in the majority of his early British films, Stewart Granger shines in a way that he couldn’t possibly replicate under the restrictive confines of the Hollywood studio system. Not that Hollywood films aren’t good; far from it. But there’s something so unique and so endearing about British cinema; it’s impalpable. All I know is that Saraband for Dead Lovers is a delightful hidden gem of a film, and I’m absolutely thrilled to have discovered it. I have a new found appreciation for Stewart Granger, and I encourage you to seek out these early performances if you haven’t already. No more of this “the other Jimmy Stewart” nonsense from me. From now on it’s Mr. James Leblanche Stewart Granger, master of the British romantic historical drama.

This piece was originally published at StreamLine, the official blog of FilmStruck on May 6, 2017 and can be found archived here. 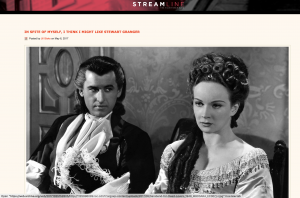