The Hidden (1987) is a tough film for me to review objectively. I sought it out right after I discovered David Lynch’s bizarre masterpiece, Twin Peaks, a show I have loved since I was a young teen. At the time, I was madly in love with star Kyle MacLachlan, who plays FBI agent Lloyd Gallagher– three years before his debut as the coffee drinking Special Agent Dale Cooper– and I took anything he was in, as well as anything even tangentially related to Twin Peaks, with a fervor I cannot describe today.

I have always been a huge fan of action-thrillers, but never have I been much into Sci-Fi. My first taste of The Hidden was a few years earlier, while watching the much-beloved MonsterVision on TNT. Host Joe Bob Briggs was showing The Hidden 2, which has roughly 20 minutes of footage culled from the original films finale. I ended up falling asleep not long after, as the film is, to put it lightly, total garbage. After my introduction to Twin Pinks, however, I sought the original film out.

And it was a good idea. I love The Hidden. It is a taught, fun thriller that didn’t get the love it deserved for many years until it became a cult classic. Before having been sent the recent release by The Warner Archive Collection, I actually watched the film on cable after several years, and forgot just what a fun thrill-ride it is. Watching it again a few months later on the pristine Blu-Ray print, it was quite possibly even more entertaining. I was able to pick up on and see things I’d never noticed before, making it an a joy to watch all over again. 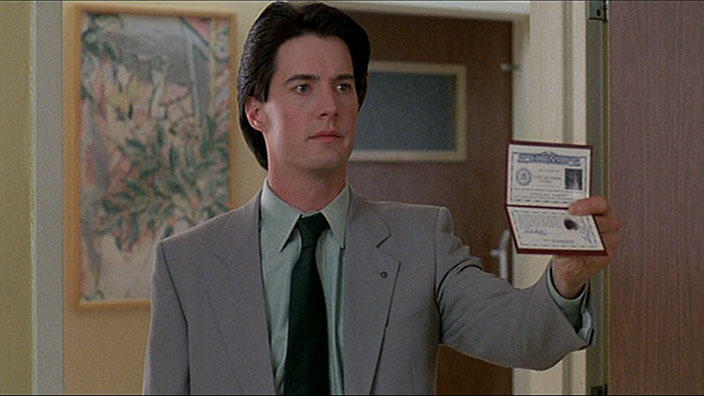 Michael Nouri co-stars as LAPD detective Tom Beck. There have been a rash of violent events, including bank robberies, car chases, and vicious murders around LA by a man named Jack DeVries (Chris Mulkey) over multiple days. After finally catching and subduing DeVries, Beck thinks it’s finally over. Then Gallagher shows up for the FBI in order to catch DeVries. Beck tells Gallagher it’s over; but Gallagher knows better. Soon, the two of them are partnered up, trying to catch another madman, and then another, who Gallagher says are a co-conspirators of DeVries.

While the “big secret” regarding the murderers is given away early in the film, I elect not to say what it is here so that anyone who has not seen it can go in fresh. While it is fairly obvious and given away early on, that doesn’t lessen the impact or the sense of dread one feels while watching. Both Nouri and MacLachlan are excellent in their respective roles, the cynical LA cop and the wide-eyed FBI Agent. They take what could have been one-note characters and turn them into sympathetic, believable people.

Directed by Jack Sholder and released originally by New Line Cinema, both parties responsible for the abysmal Nightmare on Elm Street 2: Freddy’s Revenge, it’s surprising that such a good, multi-layered film came out of their working together once again. I suppose a good script was what was needed in order for the partnership to work out this time around. Boy, am I sure glad it did.