Howard Hawks supposedly bet Ernest Hemingway that he could make a good movie out of the author’s worst book. That book, it was decided, was Hemingway’s 1937 novel, “To Have and Have Not.” And the film, released in 1944, ended up starring luminous newcomer Lauren Bacall and prodigious Hollywood icon Humphrey Bogart, two years after his Oscar-nominated turn in Casablanca, a beloved wartime drama directed by Michael Curtiz. Not only did To Have and Have Not become a legendary film, forever prevailing over subsequent adaptations of the Hemingway story, if for no other reason than in brought together Bogie and Bacall, but Curtiz had a hard time competing with his own 1942 Bogart classic. None of this appears to bode well for The Breaking Point, Curtiz’s 1950 rendition of the Hemingway source. And yet, this is the novelist’s preferred version (he considered it the best cinematic translation of any of his writing), and even more than that, it goes down compelling thematic paths the Hawks picture doesn’t even consider, coming out the other side as a film standing on its own as an outstanding production.

Written by Ranald MacDougall, who had received his lone Oscar nomination for Mildred Pierce(1945), also directed by Curtiz, The Breaking Point is a suitably modified title for a film that exemplifies the familiar noirtrope of a man (it’s usually a man) pushed passed a point of no return, a man who finds himself in a situation from which he can’t escape unscathed, where the options are limited and none of them are appealing. In this case, it’s Harry Morgan (John Garfield), a sport-fishing boat captain down on his luck and even further down in his bank balance. He and his first mate, Wesley Park (Juano Hernandez), can’t land a decent gig, and to make matters worse, in a hook uncommon to the noirmold, he has a wife, Lucy (Phyllis Thaxter), and two children to take care of. A sleazy lawyer named Duncan (Wallace Ford) scores him an illicit moonlighting opportunity, but when that predictably goes south, Harry finds himself in an even more discouraging situation.

Compounding this deflated state of affairs is the femme fatale of the film, Leona (Patricia Neal), the lady companion of a scoundrel who employs Harry for an ill-fated angling excursion. Harry’s relationship with Leona starts mildly enough, despite her best efforts, but with this wily blonde vixen, there is an inescapable, instantly dangerous erotic tension; Harry’s comments about he and his wife—“We’re something together [but she] spoils everything else for me”—suggest the potential for wavering fidelity. Leona is a threat in more ways than one, though. She is a foil to Harry’s unstable home life, sure, but she is also a pesky witness to his murderous undoing, and a confident, captivating Neal plays both facets beautifully, a tortuous judicial menace and a tantalizing sexual hazard.

In an opening voiceover that only returns later in the picture, Harry laments the tranquility of the sea, the peace aboard his beloved Sea Queen, the peace that soon gives way to the despair and danger of The Breaking Point’s grounded Newport Beach setting. A veteran with little money and few prospects, Harry the “boat jockey” faces an uncomfortable post-war reality: an America that has moved on from World War II, where conservative domestic ideals are also liabilities that must be exhaustively preserved. What pushes Harry to his respective breaking point, then, and again this is rare for a film noir with its typically solitary souls adrift in the darkness, is the fact he has something substantial at stake, something familial, something decent. This almost makes his inexorable acquiescence seem acceptable. Harry is indebted all around, legally and financially, so when his ethical qualms are brushed aside for the dire demands of necessity, his consent isn’t entirely heinous. As rightly observed by Duncan, who is pathetic in his own striving, scheming, suffering way (compared to a man like Harry, he’s only a few fatalistic rungs down the existential ladder), most would normally run from his dishonest plotting, but desperate times call for desperate measures, and when push comes to shove, we’re all “chiselers.”

Whereas To Have and Have Not engaged Bogart’s reluctant hero in a worthy cause, aiding French Resistance fighters, Harry’s ambivalent decisions steer him toward the seedier side of prohibited enterprise, namely human smuggling and serving as getaway driver for a band of bank robbers. Such comparisons between Hawks’ film and Curtiz’s are inevitable, and they don’t stop there (and they’re even more radical when applied to succeeding reworkings of “To Have and Have Not”: the regrettably named Wetbacks, from 1956, and Don Siegel’s The Gun Runners, from 1958). While To Have and Have Not assigned ample time for crafty banter and the justified exploitation of the Bogart-Bacall dynamic, The Breaking Point is emboldened by a quicker pace, a more emphatic stylistic faculty, and insightful, considered psychological depth. Another subtle difference, which is significant because of its subtlety, is the racial variation of Harry’s stalwart partner, from Walter Brennan’s drunken stooge in Hawks’ interpretation to the honorable African American Wesley in Curtiz’s. His race is hardly an issue (just as it wasn’t for Hemingway, who famously advocated racial equality), but his endearing character plays a major role in the anxious conclusion of the picture, and, most effectively, his heartbreaking absence is profoundly felt in the film’s staggering, absolutely devastating final shot. The Breaking Point is also an undeniably more somber feature, not as easily entertaining as To Have and Have Not, but far more affecting, especially as Harry broods during a nighttime stroll and muses, “A man alone ain’t got no chance.” It’s an apt noirish dictum if ever there was one. 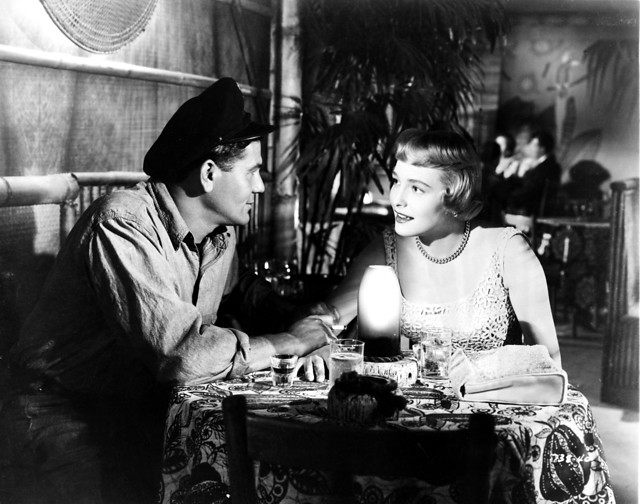 Of course, Harry isn’t alone. He has children who love him, children he always remembers to pick up a gift for, even with so much consuming conflict around him, and he has Lucy. Against his self-inflicted legal troubles and the economic hurdles that could easily be cleared but for his stubbornness, Lucy’s pragmatism points toward the recklessness of Harry’s actions, and her peaceable demeanor draws a sharp contrast to his belligerence (his extant surliness is actually an improvement on the novel’s hostility). He’s gruff and abrasive, she’s sweet and dutiful; he blatantly flirts with Leona, so Lucy takes his wandering eye as a cue to get dolled up and dye her hair. The kids hate the new “do,” and it doesn’t suit the effortlessly beautiful Thaxter (which is the point), but it’s a touching expression of her devotion and fragility. The household scenes are not in Hemingway’s novel, but they’re invaluable to The Breaking Point, providing an intimate poignancy seldom afforded films of the genre. The unaffected relationship between Lucy and Harry is no ill-fated romance; it is a legitimately genuine marriage, and Garfield and Thaxter express a correspondingly authentic ardor. In this, he may be the heavy, but her delicate persuasion confirms the consequence and heart of Harry’s plight. As Stephanie Zacharek writes in her essay accompanying the Criterion Collection Blu-ray of The Breaking Point, “Thaxter ought to have been better known as an actress, but she packs a career’s worth of perceptiveness into this one performance.”

Curtiz himself had been a prolific filmmaker for decades, first in Hungary then in Hollywood, most notably at Warner Bros. where his eclectic range of titles promoted the deceptive view of an inconsistent journeyman, a reputation that stressed quantity and diversity but neglected to consider the quality of his output. Regardless, this superficial view is in part rectified throughout the supplemental content of the Criterion disc. There is some discussion of Curtiz and his direction of actors, but mostly, contributors like critic Alan K. Rode proclaim his proficient artistry (Bette Davis apparently said Curtiz gave more attention to the camera than he did his performers). A video essay by Taylor Ramos and Tony Zhou likewise examines Curtiz’s technical methodology, prominently seen in The Breaking Point’s nicely-staged concluding shootout, for example, a masterful arrangement of constricted space and depth of field. And thankfully, this essay mostly avoids the burdensome, needlessly interpretive visual analysis that often hinders such material — sometimes, a shot is worthy of attention just because it looks good, not because critics assume it means something. Moreover, the 2K digital restoration vividly illustrates the potency of Curtiz’s aesthetic, working with cinematographer Ted D. McCord to amplify deep shadows, slanted lighting, and the efficient rendering of moody Mexican cantinas and airy seaport exteriors.

In addition to excerpts from a 1962 episode of Today, showing contents of the Ernest Hemingway House in Key West, Florida, the Criterion disc also devotes isolated attention to The Breaking Point star John Garfield. Julie Garfield, his daughter and an actress in her own right, speaks comprehensively about her father, tracing the course of his capricious life and career, from his difficult childhood to his inauspicious origins in the movie business. Following a period of bumming across America, brief imprisonment, illness, and a tour with what Julie considers the “snobby” Group Theatre, Garfield landed his first feature film role in 1938. The movie was Four Daughters, also directed by Curtiz, and his debut so exceptional it earned him his first of two Oscar nominations. As far as The Breaking Point, which she considers one of her father’s best, Julie accurately praises Garfield’s physicality, the intuitively sensual nature of his interaction with Thaxter and his credible presence on the boat, flawlessly conveying the procedures and the nitty-gritty of fisherman life. Ultimately, however, this would be Garfield’s penultimate film. Following the publication of his name in “Red Channels,” an infamous anti-communist pamphlet (unlike his wife, Garfield had never been a member of the Communist Party), the ensuing blacklist destroyed his career. To a large extent, it also devastatedThe Breaking Point, which was surreptitiously released by the studio and largely forgotten. As Rode notes, “Garfield’s tragedy was The Breaking Point’s tragedy.” Fortunately, the film now has its moment to shine, and it, along with all of those involved, shine brightly indeed.