Norman Jewison sells himself short when discussing his chic, 1968 romantic caper, The Thomas Crown Affair. In an interview included on the new Kino Lorber Blu-ray of the film, as well as in his commentary track, he repeatedly refers to the picture’s observance of style over content, to its polished design at the expense of a substantial narrative. He’s not alone in this assessment; in his 2.5-star review, Roger Ebert called The Thomas Crown Affair, “possibly the most under-plotted, underwritten, over-photographed film of the year,” adding, “Which is not to say it isn’t great to look at. It is.” But what this assertion assumes is that, one, such a leaning is necessarily bad to begin with (which it’s not), and two, that the film’s overt stylization isn’t simultaneously in the service of its story. The Thomas Crown Affair is undoubtedly a snazzy formal feature, from its modish cinematography by Haskell Wexler to its synchronized editing by Ralph Winters, Byron Brandt, and supervisor/associate producer Hal Ashby, but with a script by Alan Trustman, a Boston lawyer penning his first screenplay, those superficial qualities seamlessly reflect—and integrate—a trendy milieu populated with characters who are themselves preoccupied with appearance.

There is, of course, the world of Thomas Crown (Steve McQueen), a world of enveloping wealth and veiled criminality. Conceiving an untraceable theft of more than $2 million, Thomas approaches and executes his criminal enterprise with the same meticulous care, confidence, and coordination he applies to a corresponding business savvy. Against his affluent backdrop, rendered sleek and spotless by Jewison’s camera, Thomas exudes an attractive, symbiotic self-assurance. He is derived from a Cary Grant prototype, with similar charm and ease, but has an accent of piercing blue eyes and roguish buoyancy; more than once, he brazenly laughs at his successes. And because it’s Steve McQueen, there are also requisite scenes of Thomas operating all manner of conveyance: a glider plane, a horse, and a revved-up dune buggy surging on the beach. (Trustman also wrote the quintessential Steve McQueen vehicle—ahem—Bullitt, which was also released in 1968.)

Countering and complimenting Thomas’s cosmopolitan veneer is insurance investigator Vicki Anderson, who enters the picture in a multi-angled series of mobile close-ups to punctuate her own progressive poise. As played by Faye Dunaway, who was already a fashion icon after her trendsetting appearance in Bonnie and Clyde (1967) and in The Thomas Crown Affair undergoes no fewer than 29 costume changes (“The camera loves her,” declares Jewison), Vicki is a dynamic, secure foil to Thomas’ scheme. And like Thomas’s conviction, her boldness is in no small part influenced by surrounding refinement. Called by Thomas an “American type headhunter,” Vicki’s appealing audacity throws him for a loop, as he is confronted by someone who can be as unabashed as he: when she indicates his involvement in the heist, he chides her for suggesting such a thing, but she quickly clarifies, no, she wasn’t suggesting it, she said it.

Entwined in this picture of color and class, McQueen and Dunaway engage in a charming, sensual tête-à-tête, each captivating the other with their penchant for shameless desire. The film’s famous chess match is a seductive montage of lips and eyes, fingers and bare flesh; it’s a jaw-dropping sequence that looks to have been as much fun to create as it is to watch. It might not be the plot others are looking for, but the effortless interaction between Thomas and Vicki as they contend with mutual coolness and deceit, and the pervasive question of who is gaming who, more than makes up for any lack in conventional drama (and helps to lighten the presence of lingering supporting players like snide cop Eddy Malone, played by Paul Burke, and hapless getaway driver Erwin Weaver, played by Jack Weston). 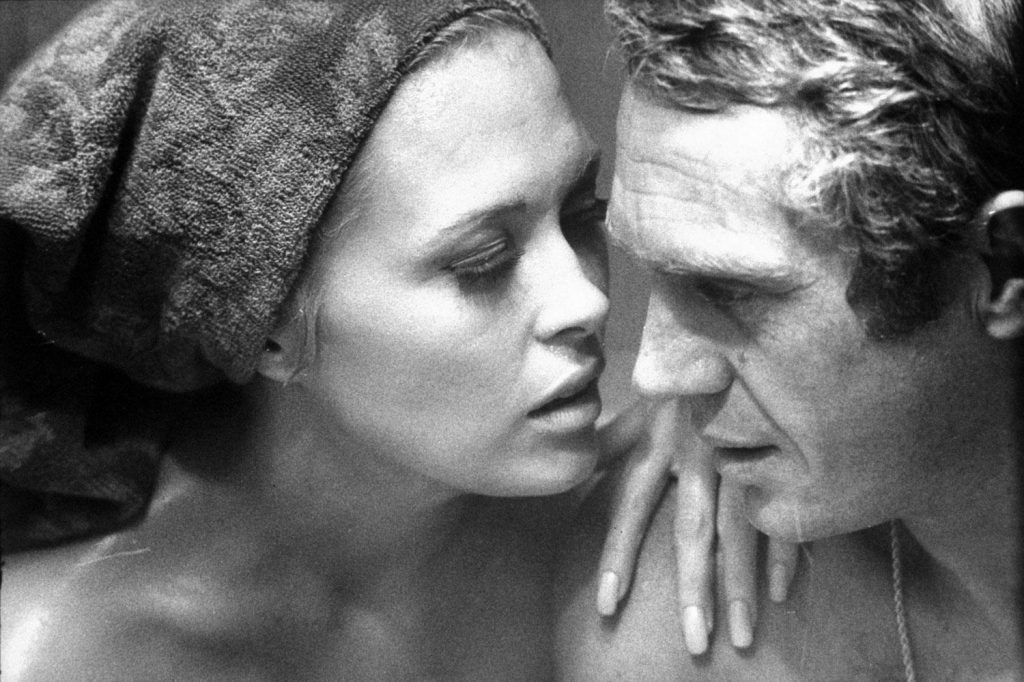 Also contributing to the belittled substance of The Thomas Crown Affair is its depiction—albeit understated—of individual malaise. With a gleaming Rolls Royce, luxuriant golf outings, wildly kinetic polo matches, and offhand art auctions, it would seem Thomas exists in something of a shallow male fantasy, where everything save for a wood-paneled station wagon looks exceptional. But the very abundance of this frivolity begs the question of why Thomas takes the criminal risks he does, and it gets to the philosophical core of the film. At just 36 years of age, Thomas seemingly has it all, yet there are allusions to a deep despair, in the form of a casual death wish (“It’d end all my worries”) and a voiced identity crisis (all he has to worry about, he says, is “who I want to be tomorrow”). It’s clear Thomas has antiestablishment aspirations, in his thieving ways if nothing else, but there is a profound void in the life of this international jetsetter. Does he do what he does because he can? Is it to show off? Does he enjoy it? As inferred by the lyrics of Michel Legrand’s Oscar-winning song, “The Windmills of Your Mind” (Round like a circle in a spiral, like a wheel within a wheel/Never ending or beginning on an ever-spinning reel), Thomas is caught in a routine course of repetition and deception. Marveling at his remote felonious management, Vicki observes that Thomas’s accomplices “don’t even know him.” True enough, but who does?

So, there is more to The Thomas Crown Affair than what simply meets the eye, and yet make no mistake, this is one stylish movie. Its most prominent formal technique—multiple screen medleys courtesy Pablo Ferro Films, inspired by experimental cinema and perhaps John Frankenheimer’s Grand Prix (1966)—start as a way to condense and synchronize the opening heist, linking the disparate involved individuals as they chart separate paths to unite at the scene of the crime. But when the optical device is used thereafter, its primary function is to speed up the progress of certain scenes, increasing its expository energy and expanding stylistic possibility in a sort of cross-screen layering. Though Jewison touts the movie as one of the first shot in Boston, and it was filmed in and around more than 90 New England locations, the setting is relatively insignificant to all but a local. What is more notable is the texture of the picture, instantly identifiable as a late-‘60s release, and the innovative mobility devised by Jewison, Wexler, and their team, rolling the camera at ground level as it bursts through a plume of billowing red smoke, or outlining McQueen and Dunaway in a rotating 360-degree embrace.

To whatever extent The Thomas Crown Affair emphasizes the sweeping terms of form over content, it’s ultimately an entertaining film either way, which makes the Kino Lorber Blu-ray a welcome release. With a striking 4K restoration, an additional commentary track with film historians Lem Dobbs and Nick Redman, the Jewison interview and one with Pablo Ferro, there is also a 1967 featurette about the making of the film. This nostalgic glimpse behind the scenes—more studio-sanctioned promotion than informative exhibition—illustrates part of why this movie remains so popular. Though neither were the first choice for The Thomas Crown Affair, McQueen was fresh off an Oscar nomination for his performance in The Sand Pebbles (1966) and Dunaway was similarly honored for Bonnie and Clyde. Jewison, meanwhile, had directed McQueen in 1965’s The Cincinnati Kid and had just completed In the Heat of the Night, which would win an Oscar for Best Picture and would give him his first of three Best Director nominations. As is seen in this short documentary, these three were working at the top of their game and seemed to have a great time doing it. If the resulting film has more style than story, so be it. 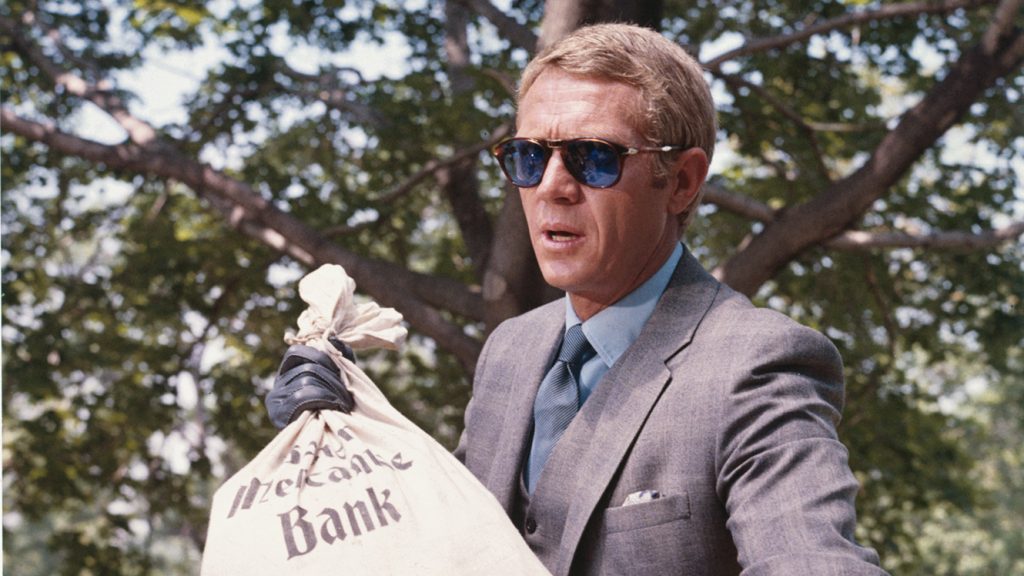