In Satyajit Ray’s The Hero, paper money falls from the skies like sieved flour, blanketing the land in hillocks of fresh currency. Alone, a man walks through the mounds, grabbing armfuls of bills and blissfully throwing them back into the skies. Suddenly, the blizzard stops. All goes quiet. And the man feels alone; so terribly, terribly alone. A phone rings. In a daze, the man stumbles through the salaried dunes searching for the ringing. Finally, he finds the phone. But instead of a stand, it’s cradled in a skeletal hand poking up from the ground. The ringing continues. He starts running, and finds the ground covered with more skeletal hands, more ringing phones. The ground starts pulling at his legs like quicksand and he’s soon buried up to his neck. In the distance, he sees a ghostly figure. He cries for help, flinging out his arm. The figure comes close, reaches, but not far enough. And the screaming man is swallowed beneath the surface.

And with that the man awakes with a start. He takes a moment to steady himself and regain his bearings. Where is he? A train in east India. Where is he going? To Delhi. Who is he? Arindam Mukherjee (Uttam Kumar), matinee idol of Bengali cinema. Finally, why is he here, on this train, in this compartment, heading towards Delhi, having this terrible nightmare? That is the question at the heart of Satyajit Ray’s The Hero (1966), one of the most atypical and unusual works by that great maestro of West Bengali parallel cinema. Made a mere seven years after completing the last film in his immortal Apu Trilogy, the series that established him as one of the world’s premier cinematic poets, The Hero is so different from his early films that it seems the work of a different director altogether. Here is a film that abandons the objective, naturalistic eye of his first films in favor of surrealistic dream sequences and bleary-eyed flashbacks. Whereas Ray rarely moved his camera in the Apu Trilogy, scarcely a scene goes by in The Hero where the camera doesn’t leisurely pan across rooms, zoom in and out on characters in the background and foreground, or edit between jarringly different frame compositions. At times, The Hero feels like we’re witnessing Ray discover the full width and breadth of cinema itself with all its alluring bells and whistles. How appropriate considering the film is an unapologetic meditation on the nature of cinema, the psychological deprivations of celebrity, and the agony of sacrificing creative freedom in the quest for popular appeal. If it is not autobiographical in nature, it is still Ray’s self-portrait of an artist in existential turmoil. 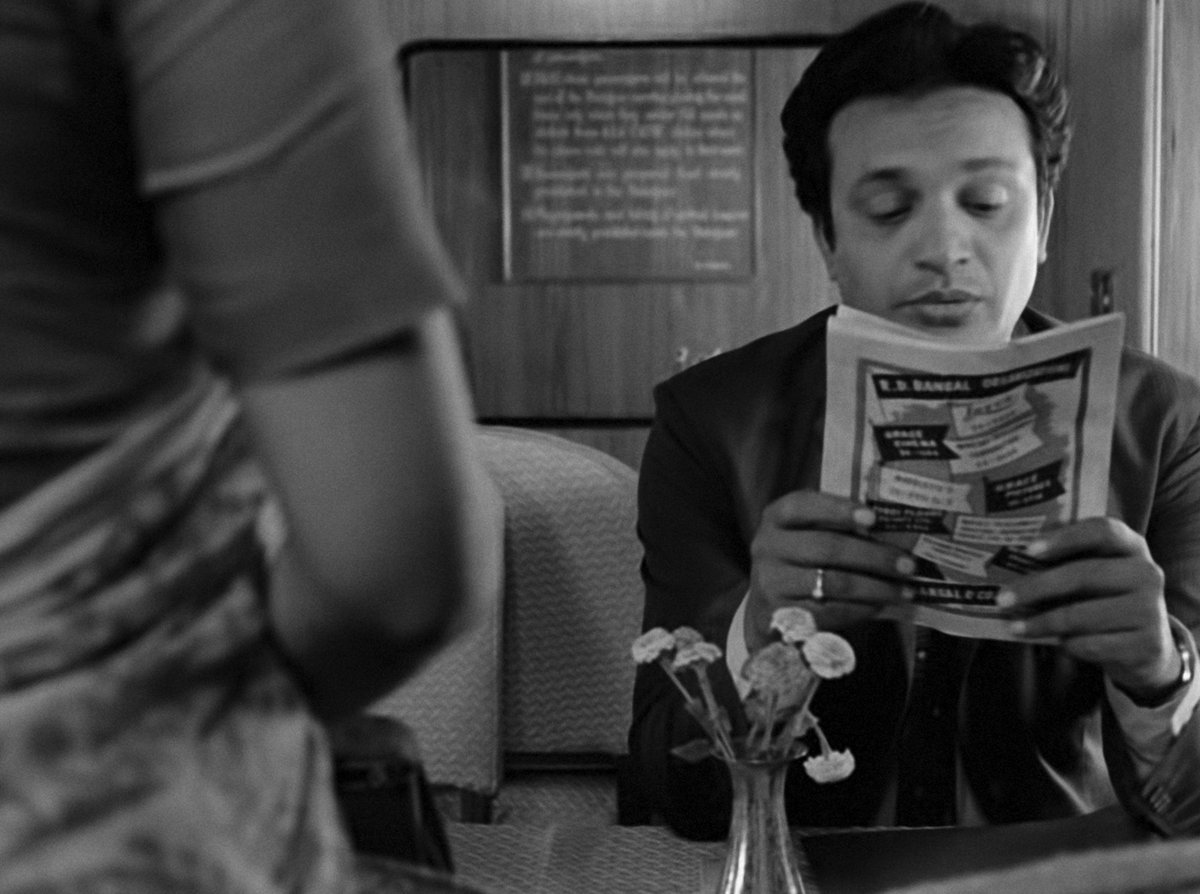 The film follows Mukherjee as he travels to Delhi on a crowded train to receive a prestigious award. During the ride, he meets Aditi Sengupta (Sharmila Tagore), a young female journalist who edits a modern women’s magazine. Though generally dismissive of movies, she nevertheless sees the train ride as a serendipitous opportunity to corner Bengali’s biggest star for an interview. After disarming him with a request for an autograph, she begins needling him on his past. Slowly, he lets his guard down and recounts his life from his earliest days as a stage actor to his time as an half-hearted political agitator to his first film roles. Again and again we see Mukherjee as a feckless, noncommittal young man dominated by overbearing mentors and friends. First, it’s Shankar-da (Somen Bose), the leader of his theatrical acting troupe who berates him for considering trying out for a screen test. Second, it’s his good friend, a political revolutionary, who drags him along to worker’s strikes and protests. Finally, it’s an arrogant, dictatorial film star he meets on his first shoot who sabotages his performance. Crucially, he’s only able to escape their orbit by chance: Shankar-da suddenly dies during a village festival; his friend gets arrested by strikebreakers; he manages to eclipse the old star in popularity. And now, sitting on the top of the world, Mukherjee is tormented by his past cowardices. But even more than that, we sense he feels lost without another authority figure he can cower under. For the first time, he must make all of the decisions in his life. And it terrifies him.

If The Hero is stylistically atypical of Ray, it could be said that the film sees him entering into a dialogue with his filmmaking contemporaries, borrowing or adapting their ideas and stylistic modes for his own purposes. His use of flashback as a means of psychological self-interrogation recalls Ingmar Bergman, particularly Wild Strawberries (1957), itself a film about another aging man traveling to a city for an award who’s mentally pushed and prodded into existential self-reflection by the young people he meets on the way. In his insert essay for the Criterion Collection’s superb Blu-ray release of the film, Pico Iyer compares the dream sequences and meditations on fame with Federico Fellini’s 8½ (1963) and Uttam Kumar as an “Indian Mastroianni.” And finally, the characters mutter and gossip about the superiority of American cinema compared to Bollywood, name-dropping figures like John Ford and Humphrey Bogart. (Film buffs will get a chuckle over one line where one passenger admits that American movies have stagnated recently thanks to risk-averse, over-bearing studios. After all, this movie was released a mere year before Arthur Penn’s Bonnie and Clyde kickstarted New Hollywood.) 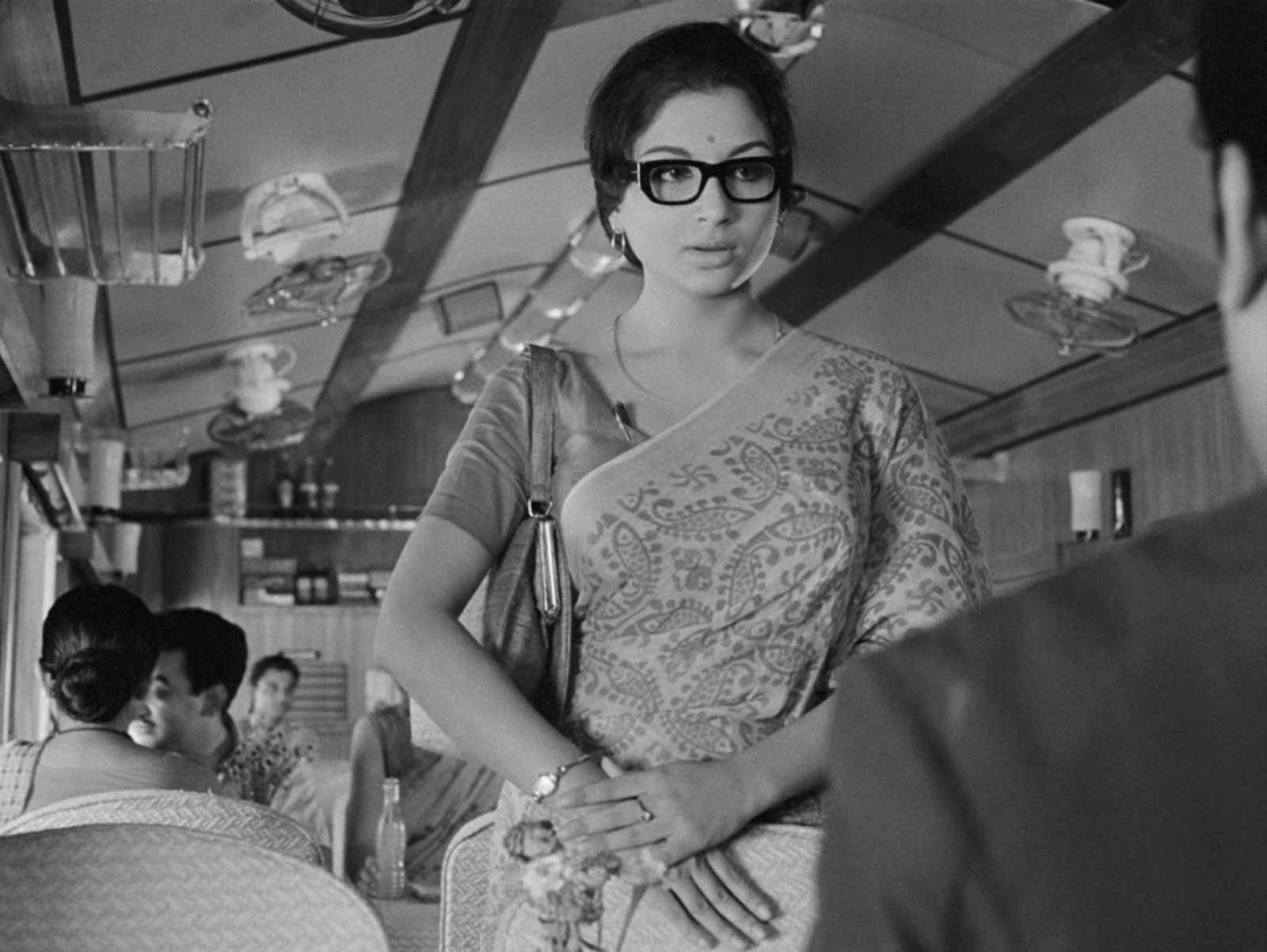 With The Hero, Ray is holding Bengali cinema up to the light to examine all its nooks and crannies. And what does he find? For that, one must pay attention to how Ray ends the film, particularly with how Sengupta ends the interview and Mukherjee abandons himself to his adoring public. Are either of their problems solved? Did Sengupta get her scoop? Did Mukherjee get his absolution? Or did they both agree to pretend that they’re the same strangers they were when they first met?