“YES” the poster blares, “this is a beautiful American girl in the arms of a Japanese boy!” Beneath this headline a picture of a Japanese man kissing a beautiful white brunette, his left hand splayed on her neck as if he might grab and squeeze the life from it. “What was his strange appeal for American girls” a subtitle demands? What could inspire such a sinister, forbidden passion in these United States? Had America not defeated Hirohito’s “Yellow Peril” a mere decade ago? So asks the poster for Samuel Fuller’s The Crimson Kimono (1959), a film marketed as a lurid exploitation piece by nervous studio heads at Columbia Pictures. Promising forbidden love between the races when institutionalized racism was still the law of the land, it teased taboo-smashing titillation and thrills for a population exhausted by the suburban white-picket fence banality of 1950s America. 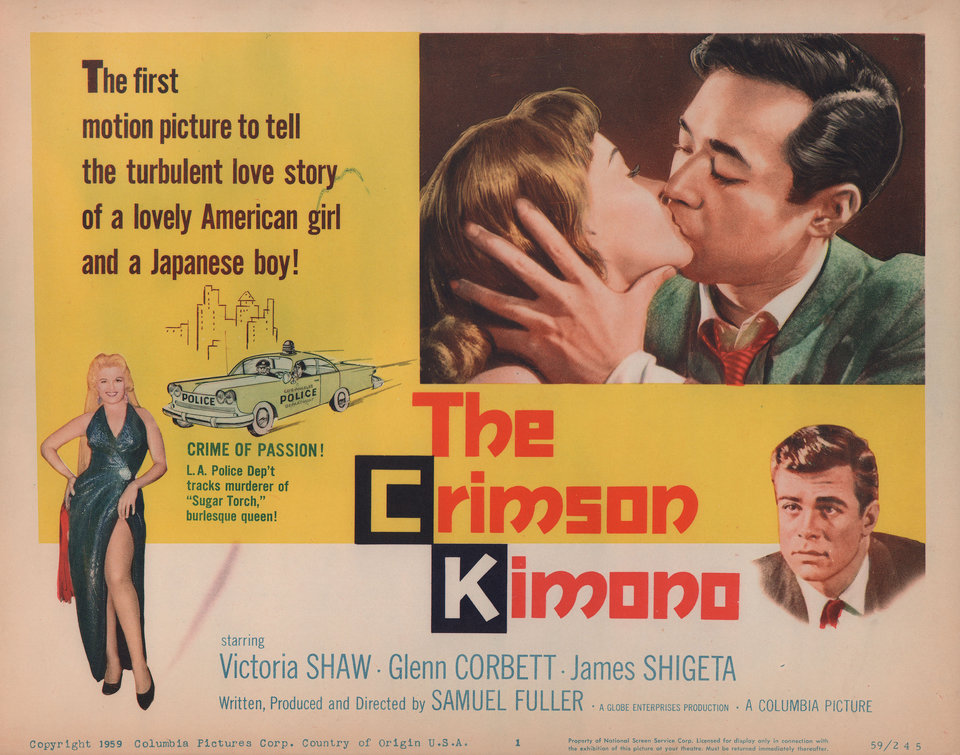 But the marketing couldn’t be further from the truth. The Crimson Kimono wasn’t exploitation. It’s characters weren’t sex-obsessed maniacs: the woman in question wasn’t some back-alley “nympho” looking for “kicks;” the Japanese protagonist not some amoral predator. (Not that the opening sequence did Fuller any favors). In one of the most provocative first scenes in a career full of provocative first scenes, a buxom, half naked stripper named Sugar Torch (Gloria Pall) runs down the crowded streets of Los Angeles before being shot to death by an unseen gunman. Then, in a moment that would be mimicked by legions of 80s buddy cop movies, two police detectives show up at her strip club to investigate.

But again, The Crimson Kimono wasn’t exploitation. Inspired by D. W. Griffith’s Broken Blossoms (1919)—one of the first movies to positively depict interracial relationships—it’s an uneven mixture of hard-boiled police thriller and romantic melodrama centering on an Asian winning an All-American Girl despite competition from an All-American Boy. As a crime drama, it largely falls flat as the central whodunit storyline involving Sugar Torch’s murder gets ignored for much of the film. But as an exploration of coded male romance and Cold War-era racial politics, it’s irreplaceable, even if some of its conclusions smack of modern political incorrectness.

As Julie Kirgo points out in her liner notes essay for the recent Twilight Time Blu-ray release of the film, The Crimson Kimono can perhaps be best understood as a romance between its two male leads: detectives Joe Kojaku (James Shigeta) and Charlie Bancroft (Glenn Corbett). The two met in a foxhole during the Korean War where Joe saved Charlie’s life (“I’ve got a pint of your blood in me!” “I don’t miss it.”). Afterwards they joined the Los Angeles police department and moved into the same apartment—with separate rooms and beds, of course. Notably, the two have much better chemistry together than with the third part of their love triangle, Christina Downes (Victoria Shaw), an art student who may be connected to Sugar Torch’s killer. Despite each getting lengthy romantic scenes with Christina full of gentle music and emotionally-charged two-shots, Joe and Charlie’s affections feel perfunctory, even rote. It’s the scenes they share with each other cracking the case, chasing down witnesses, and traveling through the Japanese sections of Los Angeles that seem the most passionate.

One could even argue the two share a “love scene.” After mistaking Charlie’s reaction to his interracial romance with Chris as disgust, Joe becomes convinced that his long-time partner harbors hidden racial resentment. Disillusioned, Joe works out his pain in an exhibition match with Charlie at a kendo tournament. Breaking the rules, Joe starts bashing Charlie about the head and shoulders with his bamboo sword until he’s unconscious. It’s an astonishing moment of kinetic filmmaking as the lightning-fast editing cuts between claustrophobic shots of the fighting, close-ups on Joe and Charlie’s hidden faces, and close-ups on the furious audience members. It’s violent and disturbing, but within the context of homophobic patriarchy, it’s the closest either of them could come to working out potentially hidden feelings towards each other. 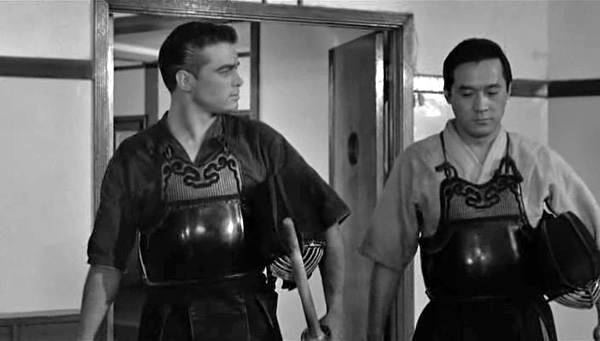 All of which leads to the central thesis of the film: racial hatred and mistrust can infect anyone, even minorities. I can already hear the modern think-piece writers revving their computers to indignantly type rebuttals. “Minorities CAN’T be racist since racism refers to socioeconomic structures which don’t negatively impact white people;” “how dare Fuller, a Jew who should know better, make the minority character ultimately be in the wrong;” “why must the Japanese character get lectured by white people about the dangers of intolerance, especially considering that as a resident of California it’s almost certain that his family would have been among those interred in camps during World War Two?”

But one must remember that 1959 was not 2018. And if Fuller’s aspirations seem as antiquated as Griffith’s attempts at depicting Asians with dignity in Broken Blossoms, one must remember that the very concept of a loving, consensual romance between a white woman and a Japanese man was still shocking enough to make producers want to rebrand a thoughtful exploration of race as exploitation. Consider the film’s title. The Crimson Kimono refers to a grotesque stripping routine planned by the doomed Sugar Torch which sees her get into a kimono and flirt with a burly villager, infuriating her cuckolded husband. It’s the very definition of cultural appropriation, and not even Joe seems bothered by it when he’s walked through it by Sugar Torch’s manager. This was the level of racial discourse in 1959 America. Maybe The Crimson Kimono wasn’t just important, it was necessary as part of our ongoing national dialogue. But leave it to Samuel Fuller to pepper the whole thing with broads, strippers, and hidden gunmen.