Peter Sellers was by all accounts, including his own, a cipher; an empty vessel that didn’t just inhabit roles, the spirit of his characters inhabited him. Whether Middle Eastern, a cockney, a Bohemian intellect, a French detective or a German super-brain, Sellers the chameleon would disappear as he transitioned into a fully formed person, no matter how threadbare the source material may have been. One of his final roles as Chance the Gardener in Being There, allowed him the ultimate challenge by meta-textual design, becoming the very amorphous person he claimed to be.

Difficult to work with, his personal demons and psychosis stretching into the domain of a borderline personality disorder, Sellers had become, by the 1970s, reclusive and bitter. One of the few directors who knew how to navigate these difficult waters, Blake Edwards consistently churned out Pink Panther sequels that allowed Sellers to do some of his laziest work, even though a disengaged Sellers performance was light years more interesting than the more earnest offerings of the hottest box office stars of the day.

Director Hal Ashby was also a disillusioned filmmaker. The poster child for 1970s outsider cinema, he was highly respected and highly intimidating. Starting out as a journeyman editor, Ashby took the world by storm with his directorial debut, 1970’s The Landlord which confronted the country’s racial inequality by telling the tale of a rich white kid who intends to gentrify a Brooklyn tenement and becomes enamored by his black tenants. The next year Ashby delivered his great one-two punch with Harold and Maude, and from thereon through the decade, the hits kept coming.

While Ashby lived in a state of constant personal tumult, you would never know it from his public persona. He was kind and patient with his actors, and those who hadn’t gotten the chance to work with him, were lining up. Sellers was one of these, who had reached out to the director upon reading Jerzy Kosinski’s slight novel, Being There, pushing Ashby to take it on. His eight year campaign finally worked, and Ashby acquiesced. (The difference between 1971 Peter Sellers, on the outs with Hollywood, and 1978 Sellers, riding high from his money making Pink Panther series, was that he was still an anathema).

What resulted was a story of a very special man, by all accounts a mentally challenged shut-in who, with the assistance of a wealthy benefactor, created a simple world of his own, tending to the garden in a high-walled house. Once the benefactor passes, our man, Chance the Gardener, cannot comprehend how drastically this will change his life. And that is the real crux of the story. Chance will not change. And the very fact that he can’t comprehend this life change, means he won’t have to. 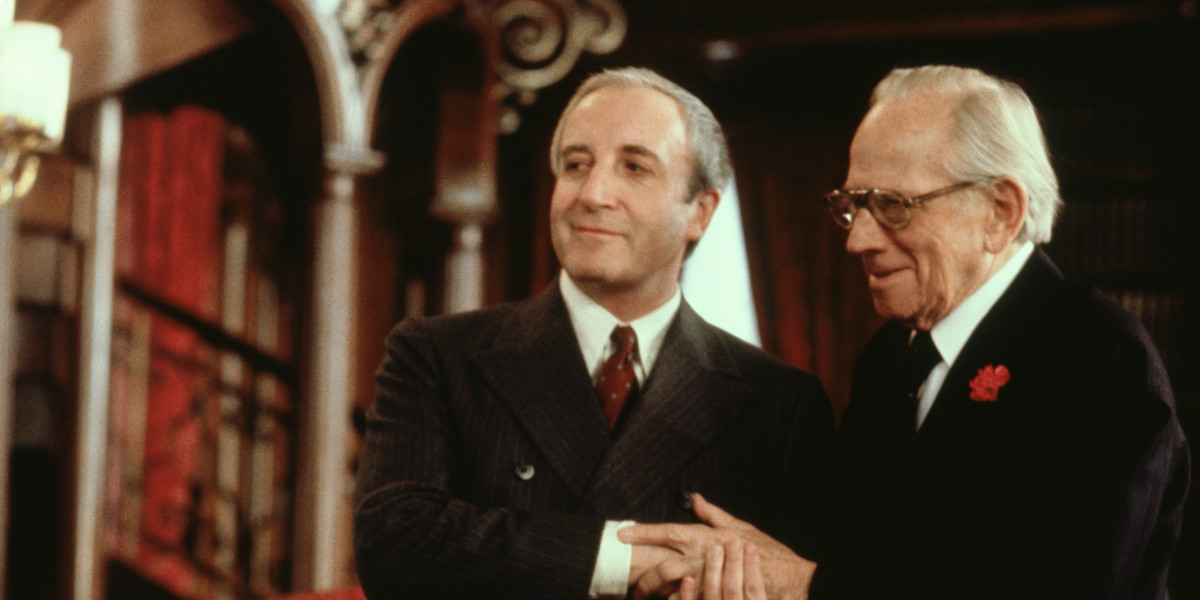 But as simple and mild as Chance is, he affects change in others, and drifts through the story impacting almost everyone he encounters. In fact, his first steps outside the mansion where he has lived all his life is akin to an astronaut stepping down onto the surface of an alien planet; played with great effect when Ashby intones the disco version of 2001’s “Also Sprach Zarathustra.”

Repeating back lines he’s gleaned from a non-stop consumption of television, and spouting platitudes about life through nature and gardening analogies, Chance the Gardener becomes Chauncey Gardenier through one of many misunderstandings. A “chance” accident causes the wife of a business tycoon’s limo to back into Chance standing on the street, mesmerized by a display window of TVs. From there, he’s whisked to her home, where he immediately ingratiates himself with Benjamin Rand (an Oscar winning performance from octogenarian Melvyn Douglas) who sees Chance as a modern day soothsayer. His much younger wife Eve (a pitch perfect Shirley Maclaine) lonely and hungry for love and companionship, believes Chance is her second “chance” at love. It’s only the President of the United States, gruffly portrayed by Jack Warden, a close friend with Rand, who doubts Chance is everything the family believes he is.

After a thorough background check is implemented by everyone at the DOJ and turns up nothing, the President has no reason to believe the odd and strangely compelling Chance isn’t who everyone claims him to be. In fact, it’s only the maid from Chance’s former life who knows the real story, and speaks truth to power in one of the most prescient lines in the film, “Yes sir, all you gotta be is white in America to get whatever you want,” when she sees Chance on a talk show, being watched by the entire nation that hangs on his every silly word.

It was compelling in 1979, and confoundedly prescient today. Kosinski’s modern fable attempted to propose a “What if” scenario played as odd and charming, if not only to slightly ominous effect. But now we know better. The pampered and thoroughly ill-prepared white “man-child,” stepping out of his mansion, can choose to join the real world around him, or instead, remain apart. Chance the Gardener may not have the tools to adapt, but say instead, we slightly tweak Chance to be an ignorant prince of his own design who has just enough functioning brain matter to “choose” to remain an outsider and instead, force those who would rally support and cherish a rabble-rouser to come to him. An out-of-touch child who worships only one thing, the television, admitting he “likes to watch,” he can barely turn his face from it, and is only enthusiastically engaged in the world around him when he has the opportunity to be on that television, whether its standing outside a store’s display window, or appearing as a talkshow guest. I could go on, but you can draw the parallels yourself. 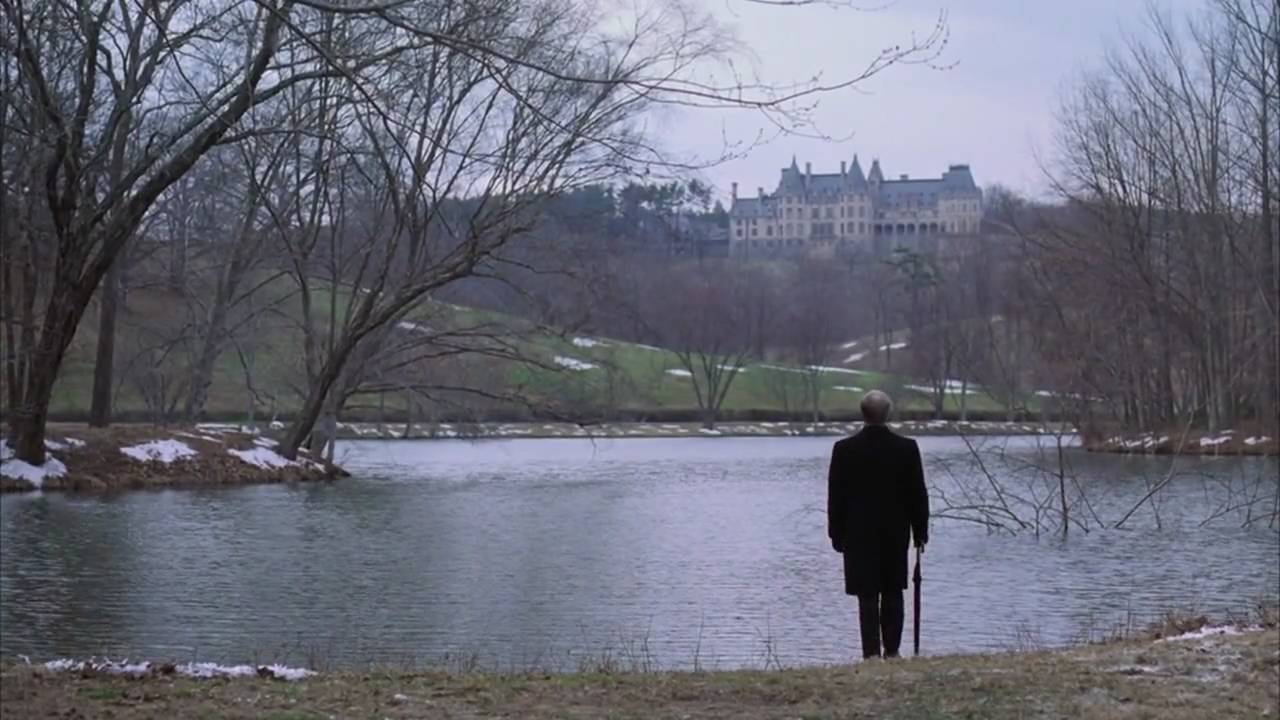 Of course, the very unambiguous ending which more than alludes to Chance becoming the next President of the United States seemed like Ashby was pushing his theory a little hard, now it’s merely the logical next step. Does Chance really walk on water? Or are we, the audience, the only ones complicit in knowing Chance’s true identity and stand mutely by as a world of fools fall at his feet? What could be done? What can be done?

The world was ready for Being There in 1979 as it was critically acclaimed and garnered Sellers many awards and even more nominations. He would go on to make just one more film, a trite little endeavor (The Fiendish Plot of Dr. Fu Manchu) that played into his worst inclinations with yet another offensive racial stereotype. But it’s Being There that audiences tend to lean on as the apex of Sellers’ career and a fitting tribute to his great character work.

Interestingly, Ashby chose to roll the end credits over some outtakes that infuriated Sellers. Today, credit roll outtakes have become expected, but in 1979 it was something of a novelty. Sellers though, felt it was a betrayal of his process, as it showed one scene that ended up on the cutting room floor, perhaps due to the actor busting every version with giggles and character breaking that he felt caused him to lose the Oscar. It could very well be, but somehow, perhaps director Ashby felt the dark prediction he made for our country’s future felt too grim and needed a post show injection of absurdism where we could all laugh together. Today, however, it asks an even greater and more sinister question: if Chance, played by Sellers, was conscious of his masquerade, could a real country’s corrupt leader be just as aware?

Head For the Bunker, It’s A Carol For Another Christmas!

There are countless film and television adaptations of Charles Dickens’s novella A Christmas Carol, a mainstay each holiday season. The most popular of these adaptations include the 1938 version starring Reginald Owen and Gene Lockhart; […]