It’s like Gone with the Wind on Mescalin. That’s how the main character John Kelso, of the film, Midnight in the Garden in the Good and Evil (1997), describes his time in Savannah, Georgia. His analogy turns out to be pretty accurate.

Clint Eastwood directed this ominous Savannah based film about colorful characters and the secrets they keep, based on the book of the same name written by John Berendt. The novel itself was known to be fiction and non-fiction, sometimes called “faction” due to the fact that Berendt drew from real life events and yet fictionalized them to a degree. 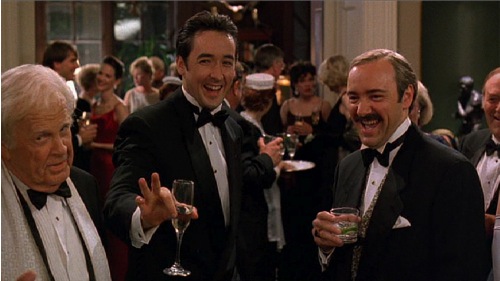 Midnight in the Garden of Good and Evil is an eccentric and dark crime drama. John Cusack stars as John Kelso, a writer who was hired by the magazine “Town and Country” to cover a party in Savannah. Once he arrives, he’s suddenly surrounded by a group of characters he could have never imagined, each one more eclectic and outrageous than the next.

Kelso finally meets the man of the hour, Jim Williams, played brilliantly by Kevin Spacey. Williams is a Gatsby type entrepreneur, creating his own wild wealth only to spend it on extravagant art and relics. But Kelso has to make his mind up about the intentions of Williams rather quickly. After the party ends, Kelso walks in to find the police surrounding Williams. Billy (played by a young Jude Law), a drunk and hot headed boy, is found shot dead in William’s house. Kelso knows Williams is truly not guilty and throws out his assignment, taking on the role of investigator to prove Williams innocence.

As Kelso begins interviewing the characters surrounding Williams, he finds more than he bargained for. Voodoo. Drag Queens. Parties. Ghost Dogs. Kelso tries to make sense of the people in the small town, deciphering their stories and uncovering secrets he wasn’t meant to know. The film is a wonderful mixing pot of interesting actors playing a Clue-type game of whodunit.

Midnight in the Garden of Good and Evil is a character study. The novel set the tone for many of the characters, but the film  took liberties in creating even more. Kevin Spacey and John Cusack are both great as the lead characters. Cusack’s performance feels a lot like his Grosse Pointe Blank character, which is not a bad thing at all. And of course, seeing Spacey’s performance today, his accent can give you deja vous as if you’re watching Francis Underwood from House of Cards.

The film was shot exclusively in Georgia, imbuing every scene with the true Savannah. Spacey’s character Jim Williams  was a real person, and his real life attorney, Sonny Seiler, was cast in the role of Judge White during the trial scenes. And for those in the know, Spacey was considered ideal casting choice for Williams, as they both are very similar in appearance.

Midnight in the Garden of Good and Evil is an integral part of Clint Eastwood’s repertoire. Like most of his films, it’s well acted and shot beautifully. The casting choices for each character are flawless. The film is a lot like a Southern Great Gatsby murder with all the fixings.

Spend some time in the garden. The Blu-Ray edition of Midnight in the Garden of Good and Evil is available now from Warner Archive Collection.