We were all kids and probably had a fascination with dinosaurs at some point.  No wonder, then, that some of the most popular of these C Grade films have featured big lizards, often alongside people. After all, there’s only about 60 million years separating us, right? But, of course, we don’t watch these things for the accuracy, do we? We watch because, even as adults, our imaginations are stimulated by the idea of taking on these great predators. Lucky for us, then, Warner Archive Collection has released two classic, albeit very different, films: The Valley of Gwangi and When Dinosaurs Ruled the Earth. 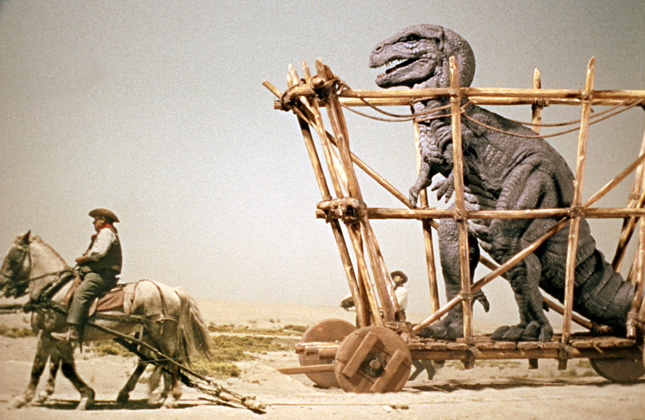 The Valley of Gwangi (1969) is based on a concept by Willis O’Brien, the special effects artist responsible for King Kong. O’Brien was Ray Harryhausen’s mentor. Harryhausen is, of course, celebrated as probably the greatest stop motion animator of all time, so it makes sense that when O’Brien’s death ended his involvement with Gwangi, Harryhausen took over. Sadly, this would be Harryhausen’s last dinosaur flick as well.

The movie is a dinosaur Western because we’re talking about Hollywood. Something like this was bound to happen eventually. Can you imagine the pitch meeting for this one? “Yeah, see, people love Westerns, right? And who doesn’t love dinosaurs? Well, what if I told you we have a Western that’s also a dinosaur movie? We’ll make millions!”

Gwangi follows the same basic structure as King Kong. Similar to Kong Island, dinosaurs in the “Forbidden Valley” are enclosed by mountains and therefore isolated with their own ecosystem that’s closed off from the outside world. Several questions immediately come to mind when considering this scenario. First of all, why don’t the pterodactyls just fly away?  Also, as with the Skull Island denizens, the ecosystem isn’t nearly large enough to support the genetic diversity needed to sustain large meat eating creatures for millions of years. But, whatever — if you’re sticking this one out until the end, you’ve already decided to put these kinds of logical inconsistencies out of your mind. 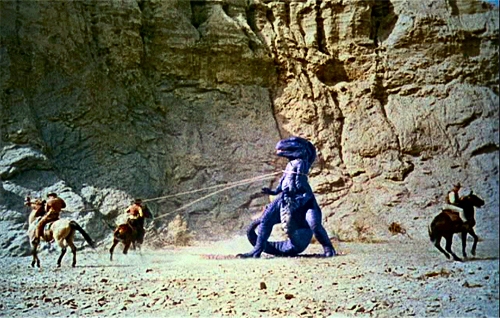 The movie’s ostensible hero, Tuck Kirby (yeah, you read that right), played by James Franciscus, is one of those scoundrels with a heart of gold you see so often in these older genre films. But he’s mostly just a jerk, and a cad to boot. There’s no reason his ex-fiance, TJ (Gila Golan), should be attracted to him after he walked out on her to pursue (what else?) his fortune.  Maybe it’s because she’s secretly a greed-head herself? She’s constantly lecturing Tuck (gawd, I can’t get over that name) about being materialistic, but when presented with the chance to put a dinosaur in her wild west show, she suddenly has a change of heart and gets greedy herself. Now, of course, it’s time for Tuck, whose name should really have been Cash Money Dollars or somesuch, to lecture TJ about being too attached to money. Hypocrite much, Tuck? 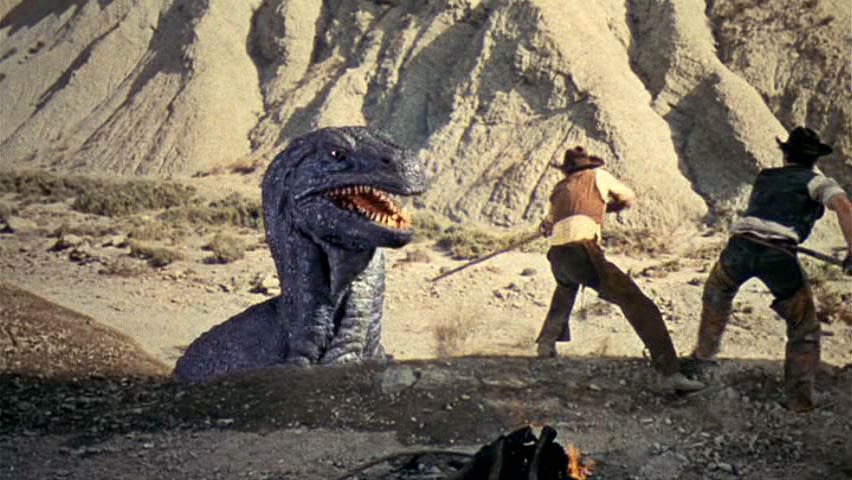 The true hero of the thing is Professor Bromley (Laurence Naismith), a paleontologist also interested in capturing one of the dinosaurs, of course, because science. Naturally, Bromley is portrayed as the eccentric, while Tuck and TJ are supposed to be level-headed, because this is America, and greed is good.

The Valley of Gwangi is quite smoothly directed, with a little more technique than you might expect. Director Jim O’Connolly seems to love lingering on faces, giving us some beautiful portraits of some of the hardscrabble minor characters in the midst of a dinosaur flick.

I don’t know how you couldn’t at least like this movie. I’ll say this much: It’s got gumption. And it’s also got a bunch of cowboys trying to lasso a tyrannosaurus. Really, this thing is the kind of fantasy combination I would have come up with as an eight-year-old. And, oh yeah, make sure to check out the guy punching a pterodactyl in the beak.

If Gwangi is a touch weird, When Dinosaurs Ruled the Earth is just batshit insane. Released in 1970, it concerns a dark-haired tribe of cave people who have to sacrifice a bunch of scantily-clad young blondes to an angry sun god. A literal sun god. I think. Oh, and there’s no moon for some reason. And since it wouldn’t make any sense at all to have these characters speak English, they have a sort of grunting cave-people talk which consists of a dozen or so words invented especially for the movie.

Is When Dinosaurs Ruled the Earth simply an excuse for nearly nude (sometimes the women are completely nude, but never the men, of course) cave people to go on a romp and do some dinosaur killing? Well, yes, definitely. All of these cave people versus dinosaur movies are. But does the story elevate the movie elevate itself over the salaciousness of the material? Definitely not. 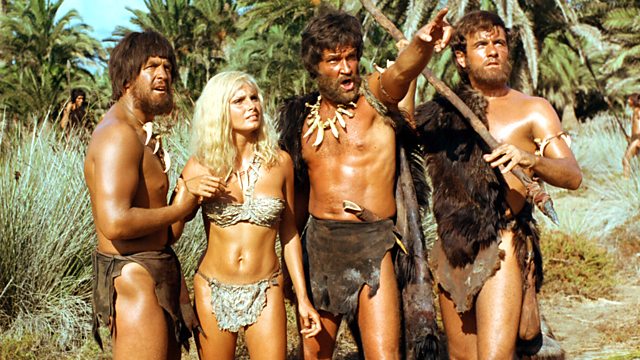 As The Retro Set’s resident cult movies guy, I’ve seen a lot of weird shit, and I have to say, When Dinosaurs Ruled the Earth is one of the most absurd films I’ve ever seen, in a wonderful “so bad it’s good” way. But I should have tallied up the amount of times I shook my head when I couldn’t believe what the hell I was watching. To wit: there’s a living, uh, mud pile with a mouth that tries to eat our beautiful lead. Later, she sleeps in a dinosaur egg. Also, I can’t figure out how this particular group of humans manage to survive at all in a world with dinosaurs. By all appearances, they’re complete idiots. They’re always getting killed. One guy gets killed trying to spear a triceratops and then a second guy decides the best thing to do is attempt to kill the beast in exactly the same manner. He dies too. 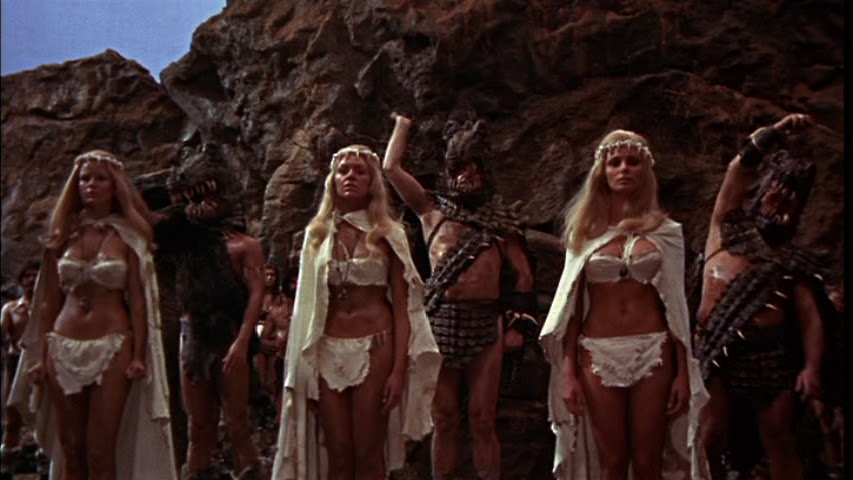 Fun fact: Science fiction novelist J.G. Ballard wrote the movie’s treatment. He doesn’t seem to have liked it very much. He called it “the worst film ever made.” Not quite, though it comes close.

The wonderful thing about both of these films is that, despite their absurdity, the imagination really runs wild as weird childhood fantasies come to life. You’re not really allowed to dream about dinosaurs fighting cave people or cowboys as an adult, but you can always get your fix by consuming weirdo media. And if you’re willing to abandon logic and sophistication, you’re probably going to have a good time.