Wade Sheeler discovers an under appreciated and exhilarating Yoyo (1965)

Today we focus on one of the hard-to-find gems, from under appreciated comic, clown and genius Pierre Étaix and his second feature, Yoyo (1965). Unquestionably inspired by Buster Keaton, Charlie Chaplin and even more under-appreciated silent comic Max Linder, Étaix was a French design student who become a gag writer for none other than Jacques Tati on Mon Oncle. From there, he made a series of popular award winning shorts, receiving an Oscar for 1963’s, Le Spirant.

In 1965, he paid homage to his silent classic comic forefathers with Yoyo, an often hilarious and touching tale of an unbelievably rich and pampered aristocrat in 1925 who longs for his lost love. When a circus travels just outside his stately mansion gates, he gets one of his multitude of servants to convince them to set up camp within his grounds and perform for him (as the sole audience member.) The trick horse rider turns out to be his lost love, and the tiny little boy dressed as a clown as his son. After the depression and the aristocrat is left penniless, he, his newfound love and son travel the country as a small circus themselves. 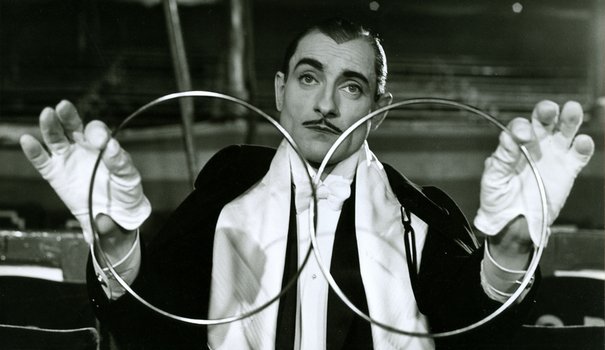 Later, the boy grows up (Yoyo – also played by Étaix, and gains great acclaim until he’s impressed into he Second World War.

Étaix’s sight gags are astounding, mostly tricks of the eye with no camera effects needed. The first 20 minutes illustrating how pampered the aristocrat is with his many attendants dressing, feeding, bathing and bringing him many flappers to seduce him is unendingly smart and ingenious. The scene of one flapper slowly, rapturously undoing his spats is so unbelievably sensual and phallic, it seems downright implausible that even French censors let it slide.

Sadly, many of Étaix’s films were held up in legal issues with the distributor all the way until 2009; meaning he is just being discovered here, and it’s about time! In fact, Jerry Lewis was such a fan he cast him in the ill-fated The Day the Clown Cried.

You can stream Yoyo here when you sign up for their free 14 day trial.