There are those moments in a good movie, very fleeting, when direction, plot and music all meld to deliver a message that is such a pure hybrid that no other medium could deliver it as perfectly.  Music, or absence thereof in films, is one of the most important elements. It can take a scene to the stratospheric heights of art, or send it crashing into the muddy depths of schlock.

You can’t slight these moments by calling them “happy accidents.” They are examples of a director understanding the medium on a level that impacts the viewer in a very profound and nebulous way.

This is, as all lists are – completely subjective. So you can argue away, and the verdict will always end in a draw. But if you agree or disagree – please let me know in the comments. We’d love to hear from you! 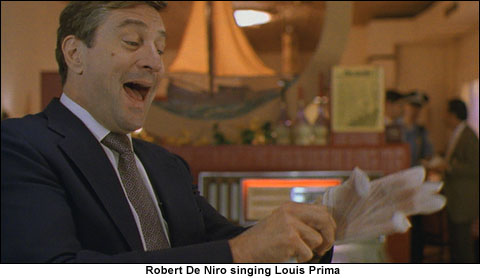 This offbeat dramedy about a shy and perhaps cowardly forensic expert who is given the gift of a woman by a mob boss is effective because of the casting swap – DeNiro is the milquetoast and Bill Murray; the mob boss. We see DeNiro’s character constantly confronted with opportunities to stand up for himself, and he fails in a variety of humiliating ways. But the scene, early on, that infuses DeNiro with empathetic charm and gives the audience a peek into his sublimated personality is during a routine crime investigation when he discovers a jukebox. He drops an LP onto the turntable, and while squeezing on his glove and looking for clues, he sings and bops around to Louis Prima’s iconic performance of “Just a gigolo/I Ain’t Got Nobody.” It’s one of those great times where an actor doesn’t just “perform” for us, but his character, a wounded man hiding under layers of disappointment, performs for us. It’s touching and funny and strange. 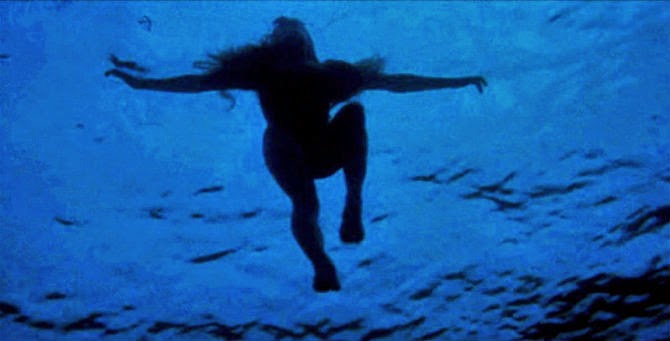 When it comes to famous scenes set to music, the shocking attack at the top of Jaws is arguably as powerful as the Shower Scene from Psycho. John Williams three note build that crescendos in the bloody and shocking explosion kept people out of the water as effectively as Hitchcock forced hotel guests to lock their doors.

Speaking of music and violence, Tarentino’s love of music is boundless, and his ability to take the most enjoyable and benign tunes and turn them, well, excuse the pun, on their ear, has been well documented since his first film. Damn him for his ironic and pitch perfect use of one of my favorite 70s popcorn songs, Stealers Wheels “Stuck in the Middle With You,” and making the opening guitar riff a hazard flare that a nightmare approaches. You all know what I’m talking about, and if you don’t, you have been warned. 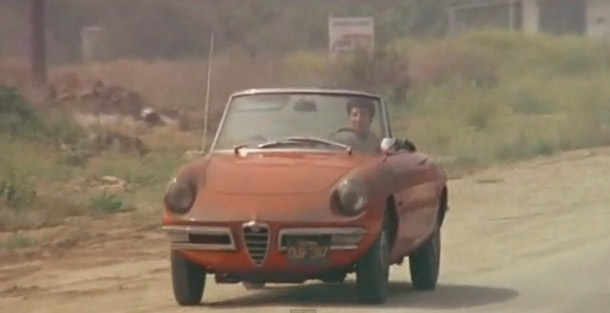 Anyone who has seen The Graduate knows how integral the Simon & Garfunkel soundtrack is to the story, from the opening sequence when Benjamin Braddock arrives at LAX with the solemn duet “Sounds of Silence,” to his summer boredom played out to the strains of “April Come She Will.” But it’s this first incarnation of the famous “Mrs. Robinson,” (the version released on the later album Bookends is markedly different) that plays like an audio energy drink to Dustin Hoffman’s mad drive from LA to Santa Barbara to La Verne where he runs out of gas and has to hoof it to the church, the pulsating tune that imitates that feeling of flight, reduced down to the slowing chug chug of a car out of gas, broke the mold for contemporary soundtracks. 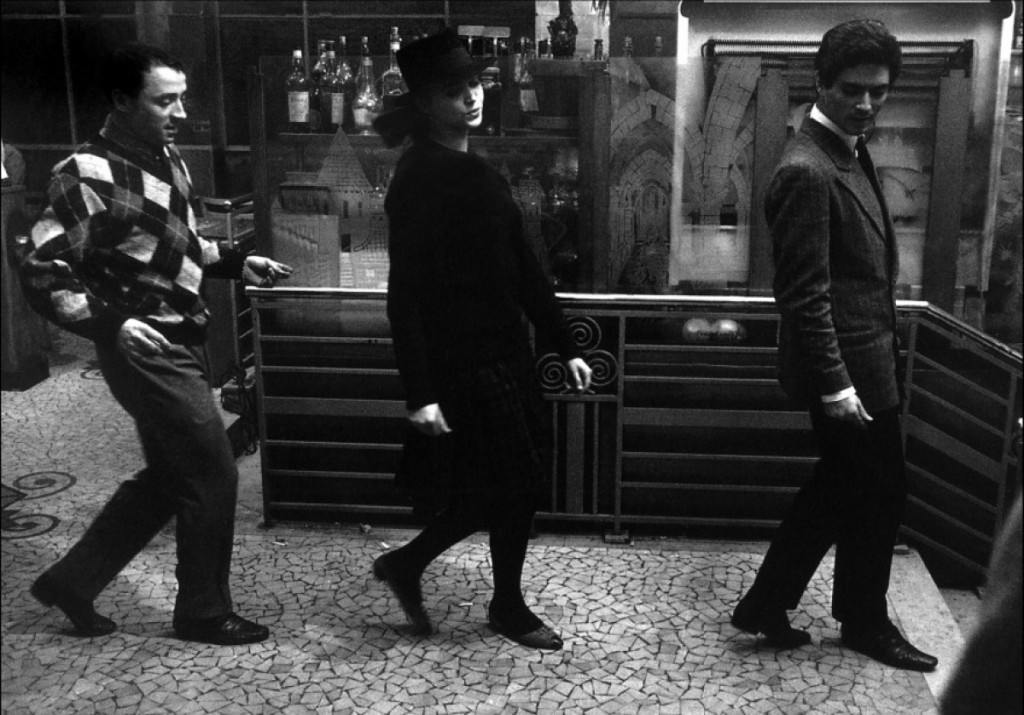 Jean Luc-Godard’s acclaimed Nouvelle Vague masterpiece following three young rebels has as many fans as detractors, but no one can argue the power and pure entertainment of the dance sequence. When Franz, Arthur and Odile take to the bar room floor and fall naturally into“The Madison” on the jukebox, the physicalization of their angst, attraction, repression and depression plays out in one amazing extended take that perfectly melds a firm grasp of storytelling, choreography and acting commitment rarely ever captured before or again. One of the greatest cinematic moments in film history. 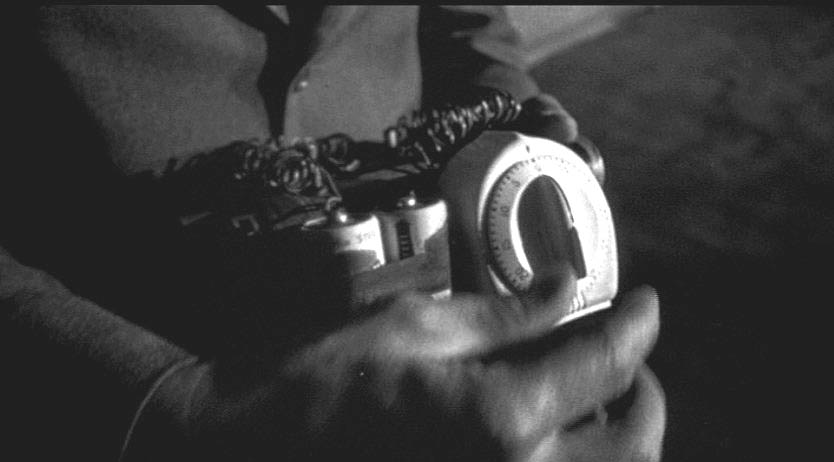 Welles again proves his mastery of music and film with the extended opening mis en scene of this, his last great film. A close-up of a ticking time bomb starts us on a visual journey throughout the characters, cars and activity in a bustling Mexican Border town, resolving in the bomb going off, setting our story in motion. But just as memorable as the visuals is the bongo infused exotica theme composed and performed by Henry Mancini. The whole film gyrates to the pulsating beat of smoky clubs, alleys and city decay, and Mancini effortlessly changes music genres, from lounge to gritty rock and roll all the time offering a menacing and seductive control. As usual, the studio, assuming the sequence was only created as a bed for the opening credits, missed the point. But whether you see the studio cut, or the restored version without titles blocking the action, you can’t deny the hypnotic fusion of music and image. 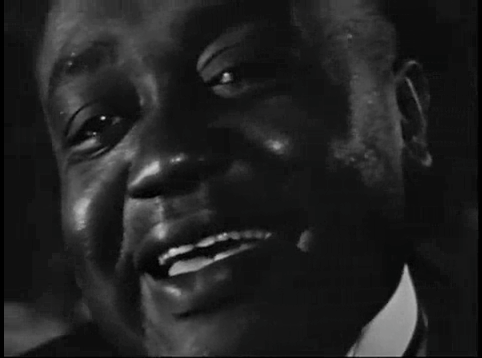 Charles Foster Kane’s excesses have ruled his life. And now, in his declining years, his obsession to shape, mold and control his pet project, his wife Susan Alexander, has gone off the rails. After publicly humiliating her and himself, he holds her prisoner in his mausoleum ironically named Xanadu. She threatens and begs to be let out and meet people, to socialize. So he orchestrates a lavish camp out, with hordes of guests and staff, driving to the swamps for a barbecue. As Kane’s sycophantic guests party to excess, Kane and Alexander fight in one of the tents. The scene begins however, with jazz band Charlie Barnet playing the tune “In a Mizz” (aka ‘It Can’t be Love’) as lead singer Alton Redd mournfully croons. As the boozy, sexy song continues in the background, and the couple’s fight intensifies, we can just make out the party goers orgy reaching a hysterical level, to the point that just above the vocalist, you can hear a woman, perhaps being raped, scream for help. It is a powerful, visceral moment, made all the more successful by the perfect sound design and direction. 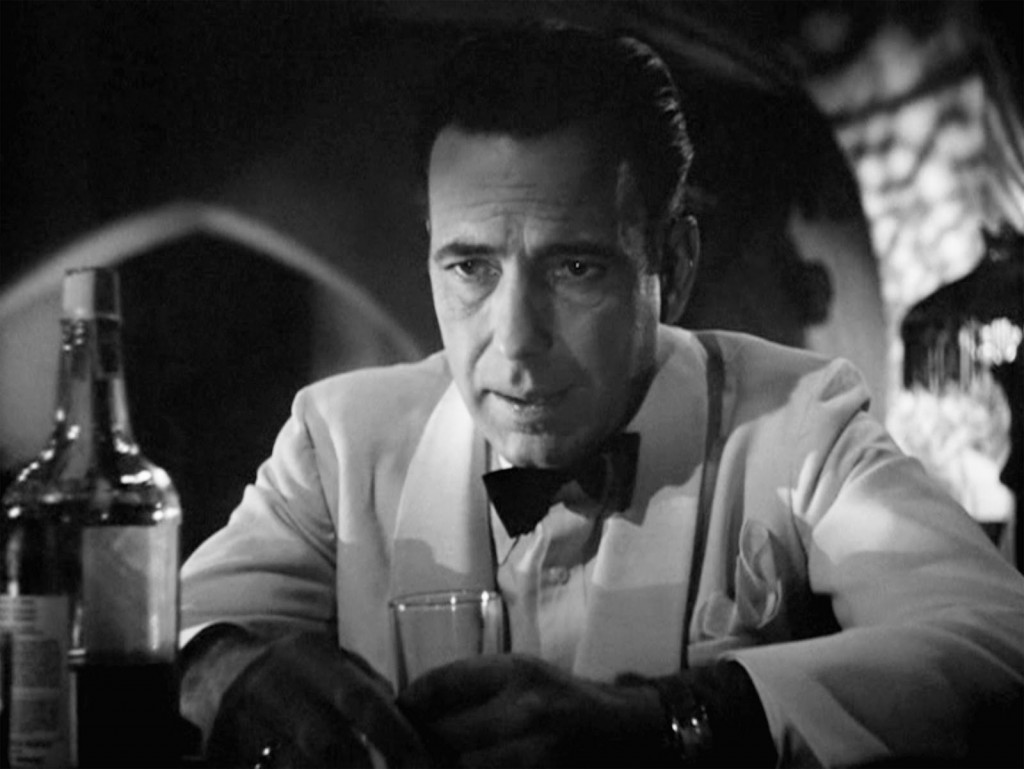 One of the most iconic moments in cinematic history is Rick Blaine self medicating after his painful reunion with the love of his life, Ilsa. In the background, his piano man Sam, plays “As Time Goes By.” Much has been made of the song and its place in movie music history. But beyond that moment, the song and its importance to the story, its nostalgic connection to Bogart and Bergman and their love, throbs like an artery, pumping throughout the movie, informing every thing Rick and Ilsa do or say. 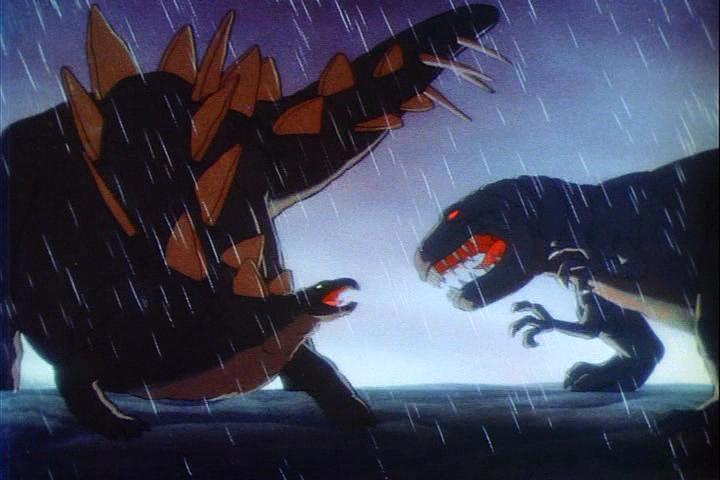 When Stravinsky’s orchestral work premiered with Paris’ Ballet Russes in 1913, the avant garde nature of the music and Nijinksy’s choreography caused shock and awe, and a riot; its erotic and stark sexuality a major contrast to the times. So it’s surprising that this was one of the pieces Disney chose to render in animation for the groundbreaking omnibus Fantasia. It’s hard to choose a favorite segment over another, and while the iconic Mickey Mouse in Sorcerer’s Apprentice and the surprisingly dark Night on Bald Mountain always rate high on fans’ lists, I think that the modernist “Spring” is the most exciting and mature. Most interestingly to me is the shockingly violent segment tells the scientific story of the first living organism through the extinction of dinosaurs – something that creationists (and perhaps Disney himself) would argue as blasphemy then and today. 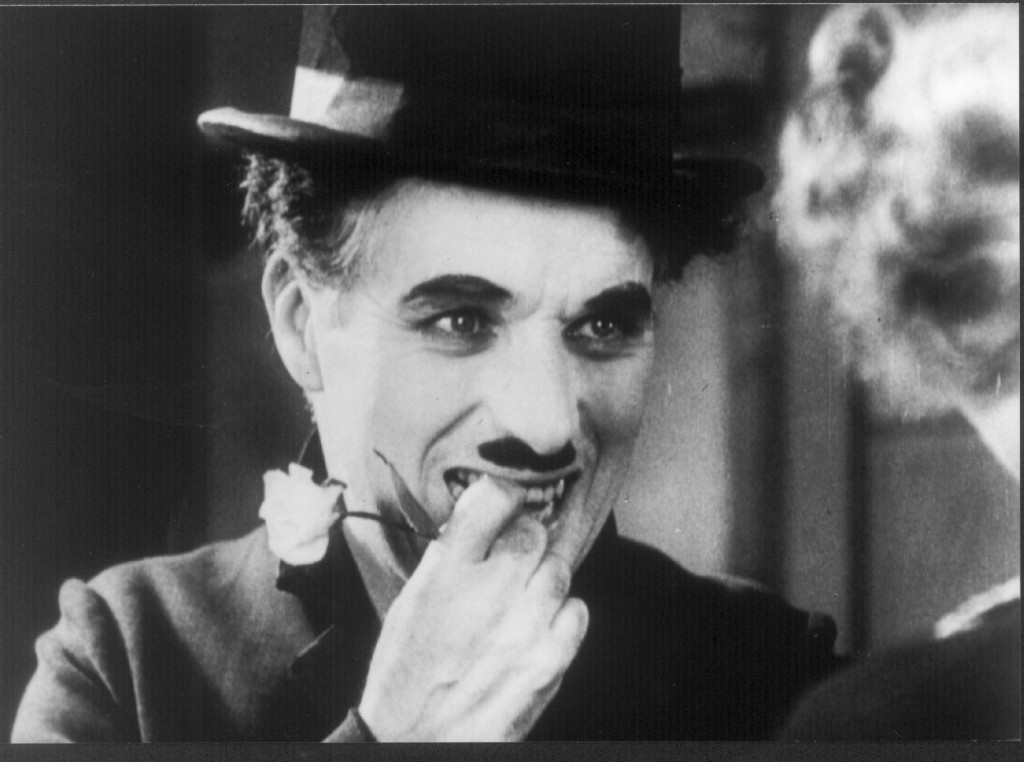 Chaplin was the definition of a control freak. But when the results were so perfect — can you blame him? Writer, producer, director, editor, actor and composer, he had to have his hands on everything. We’ve all made note of how touching and achingly beautiful the final scene of City Lights is, when the blind girl can “see” her benefactor, the tramp, for the first time. And while Chaplin’s ambiguous performance in that moment helped catapult him to the top of many great actor lists, it’s also his score, which reaches a heavenly crescendo, that opens a door to the heart that you could almost consider non-invasive cardiac surgery.

Lucky am I to be surrounded by film fanatics from all over the country on Day 1 of the 2015 TCM Classic Film Festival as we wait for the second round of films to start. […]

[dropcap size=small]I[/dropcap]f you could pick two of your favorite characters from one of your favorite movies, and give them a spin-off, who would you pick? It’s a downright delicious thought, eh? Oftentimes, the best thing about […]