Night falls on Warsaw and a woman lays murdered, stabbed to death 100 times in a crumbling apartment building. The only witness refuses to testify about what he had seen. But when the Gestapo line the building’s other occupants against the wall, he relents. Two things he remembers: ffirst, the killer wore a Nazi uniform. Second, that uniform bore a red stripe on the pants. The Gestapo refuse to believe him, for the only members of the Third Reich to wear red-striped pants are generals. Could a Nazi general be possible of such degeneracy? Abwehr agent Major Grau (Omar Sharif) thinks so. The only problem: of all the generals in Warsaw the night of the murder, only three of them were unaccounted for. The Night of the Generals, recently released through Twilight Time, offers a rogues gallery of colorful, perhaps more than sinister, suspects.

There was Wilhelm Tanz (Peter O’Toole), hero of Leningrad, favorite of Hitler, the youngest of the Wehrmacht generals. An obsessive neat freak—he sentences a subordinate to two weeks of confinement for getting shoe polish on his shoelaces—he epitomizes the image of the heartless, amoral Nazi monster. Whole city blocks are burned and shelled at his command while hunting a mere handful of resistance fighters.

There was Herbert von Seidlitz-Gabler (Charles Gray), a pepper-haired veteran dominated by an overbearing, cold-blooded wife. Drained by married life to a point of spiritual impotence, he vacillates at his desk day after day incapable of making large decisions, deferring instead to his colleagues. Mix this all with a flighty, socially irresponsible daughter and you have a pathetic figure with an axe to grind against womankind.

Finally, there was Klaus Kahlenberge (Donald Pleasence), a bald, chelonian schemer. Hesitant in speech and nervous in manner, he sympathizes with the Polish civilians under his care. When Tanz suggests leveling the city to annihilate the resistance, he reacts with horror. Seemingly the most benign of the three, he nevertheless carries a heavy secret—a secret which could spell his death if discovered. 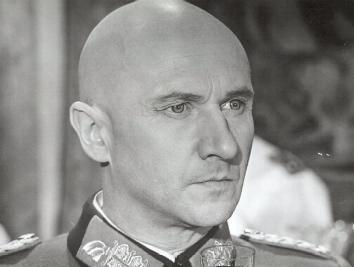 Anatole Litvak’s The Night of the Generals (1967) boasts an intriguing and captivating concept: the hunt for the murderer of one amongst men who have murdered masses. Unfortunately, about 60 minutes into the film’s 2½ hour run-time it largely abandons this premise, spelling out for the audience in no uncertain terms the murderer’s identity. This isn’t to say that the mystery gets solved within the world of the film. It’s just that the film abruptly transitions from a murder-mystery/police-procedural to a military thriller. For one of the three generals was indeed the murderer. But the other two spend the majority of the film executing Operation Valkyrie, the failed July 20, 1944 plot to assassinate Adolf Hitler orchestrated by high-ranking Nazi military officials. And from there on out Major Grau and his investigation gets shuttled to side.

The film’s lack of focus could be explained thanks to interference of producer Sam Spiegel, who along with David O. Selznick helped solidify the idea of the obsessive “hands-on” film producer. Giant, bulky epics were his bread and butter: The Bridge on the River Kwai (1957) and Lawrence of Arabia (1962). After the catastrophic failure of the more modestly budgeted Arthur Penn film The Chase (1966), Spiegel seemed to double-down on his more-is-more production ethic for The Night of the Generals. A murder mystery wasn’t enough—the film also needed thrills! Suspense! Sex!

You can practically see the parts of the film where Spiegel took a bicycle pump and inflated the story to bursting. There’s a bizarre, barely utilized framing device that positions almost all of the film as a flashback taking place nearly two decades after the first murder. All it does is necessitate the inclusion of more unnecessary characters who must survive the events of the murder investigation so they can show up in the last 10 minutes when the killer is finally captured.

Chief among these superfluous characters is Kurt Hartmann (Tom Courtenay), a mentally scarred Nazi veteran who becomes unwitting accomplice and scapegoat for the murderer’s second victim. He gets an unusually large amount of screen-time considering how ancillary his role is to the story. My guess: it was so his scenes making furious love with Von Seidlitz-Gabler’s voluptuous daughter would have some feeble emotional impact on the audience (they certainly don’t do anything to bolster their tepid, “barely-there” romance).

When The Night of the Generals keeps itself focused, it truly is an effective thriller. Of particular note is O’Toole’s performance as Tanz. Though unneeded (like so many things in the film), there are two scenes where he visits a museum to view “decadent art” confiscated by the Reich that strike a thunderous chord. Both times, he stops before a Van Gogh self-portrait and loses himself in the fiery swirls of the great painter’s eyes. Here we see a man gazing into the Void, wishing it would stare back. And when it doesn’t, the world. Just. Stops.

Effective although somewhat bloated, The Night of the Generals is rarely seen, making this Twilight Time Blu-Ray release worth a look.

For a solid 20 years or so, it seemed every hipster was sporting a “Che Guevera” t-shirt. His image became as ubiquitous as lumberjack beards are today. Were you to ask these neophytes who Guevera was, or […]