The Deadly Trackers (1973) has everything one could possibly want out of a 70’s B Western:

Wait, what was that last thing?

Two-time Academy Award nominee Richard Harris stars as Sheriff Sean Kilpatrick, a wronged lawman who follows a gang of criminals (Rod Taylor, et al.) alone into Mexico in a quest for justice (ok, now it sounds like a Western again). Deadly Trackers could have easily been a paint-by-numbers genre picture, were it not for the presence of Harris, a strong cast of veteran weirdoes around him, and just enough strange quirks in the production to keep the whole thing interesting. 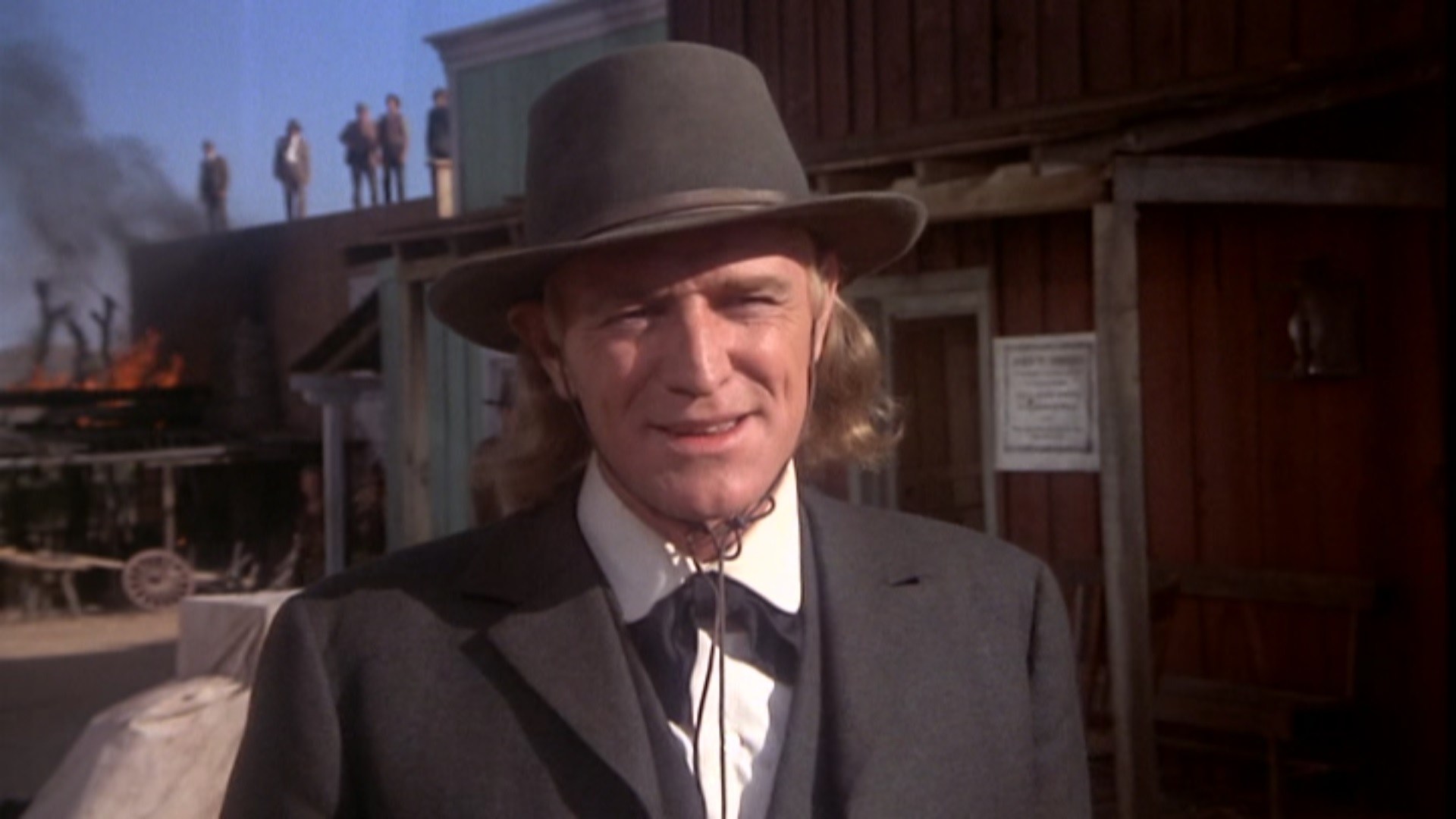 One of the more unique choices in the film comes right out of the gate in its highly stylized opening sequence. Instead of rolling film we have a series of printed freeze frames with both narration and even multi-character dialogue underneath. For more modern viewers the effect is similar to either Reading Rainbow or Tom Goes to the Mayor, and combined with the folksy, “well, shucks” narration it sets the tone for a very different movie – one that’s maybe a little more Paint Your Wagon and a little less Unforgiven. The Deadly Trackers is, ultimately, a pretty brutal movie: there’s long, drawn out beatings, innocent people are senselessly killed, and there’s a far-too-casual rape scene thrown in for good measure. The opening prepares you for a moralistic town-pulls-together story and by the end you’ve become mired in a world that is didactic, nihilistic, and smug in its pessimism about human nature. 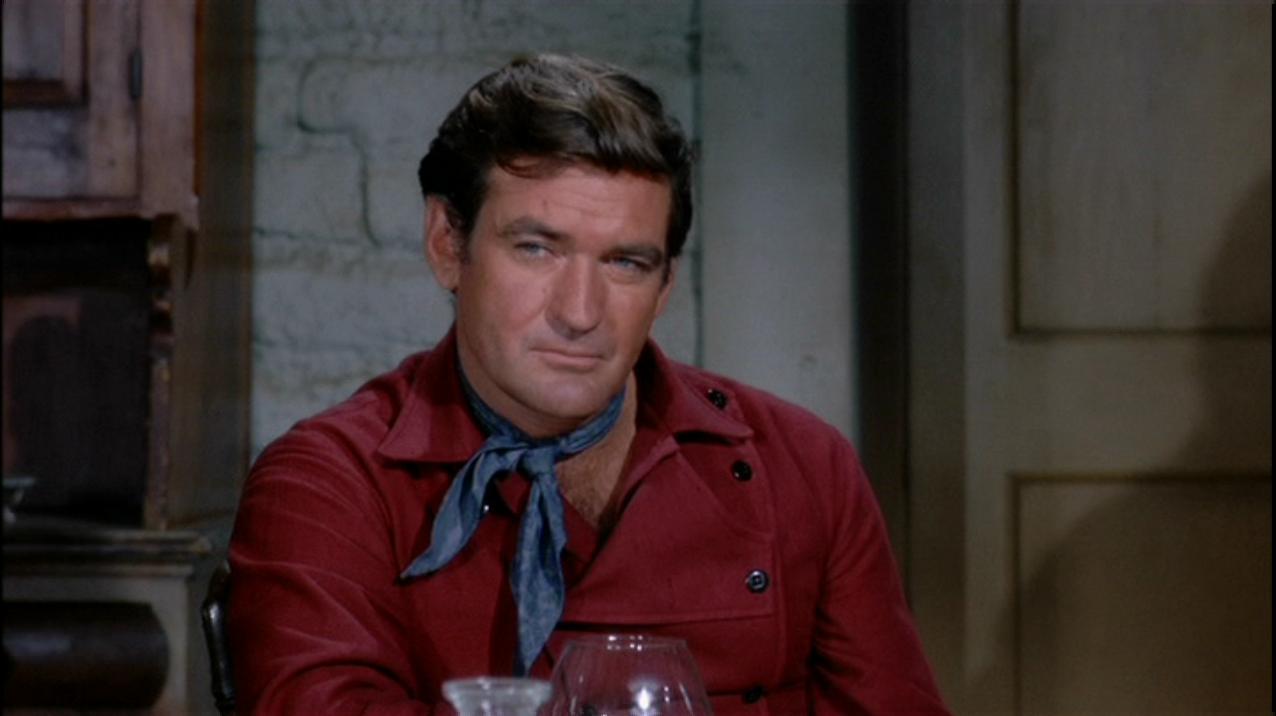 From the start the production of the film was anything but smooth. The film that would become The Deadly Trackers started out as Riata, a Samuel Fuller-helmed project based on his short story of the same name. The first iteration of the film featured Harris and Bo Hopkins and began shooting in Spain and followed the profitable Spaghetti Western model that had recently been popularized by Clint Eastwood, Sergio Leone, and chums. The studio, however, quickly became unhappy with what they were seeing in the rushes and shut the project down temporarily until it could be retooled. After arguments about both the script and the casting between Fuller and the studio, the veteran director was removed from the project and the exciting, new, (more controllable) director Barry Shear was installed.

Fresh from early successes with The Todd Murders and Across 110th St., Shear took on the task of cobbling together the raw materials that were left to him and turning it in to a workable film. If I had a hunch, I would guess that that was part of the reason behind the stylized intro – they didn’t have enough usable film, so they invented a technique that let them skirt the holes in their coverage and patched it together with narration.

Other flaws aren’t so well hidden: a particularly bad dummy ruins what should be a highly poignant scene early on, quick cuts skip over important or dramatic moments, and there are a number of continuity errors that can be found throughout. If the music ever seems tonally a bit disjointed – like maybe it was written for a slightly different film — well, that’s because it was. Much of the score is repurposed and unused tracks from Jerry Fielding’s music for The Wild Bunch.

Many of the inconsistencies in the plot and dialogue can be attributed that Harris and Taylor rewrote much of the dialogue themselves at night after shooting was done (and if you know anything about Harris’ life, you can guess what was happening while they were writing). Between Fuller, credited screenwriter Lukas Heller (who disowned the final product), Harris, and Taylor there were a number of cooks in a kitchen that maybe could have used a stronger head chef.

Harris is undeniably a charismatic actor and quite good at humanizing the pain the sheriff is feeling through his ordeal. The problem, however, is that Kilpatrick is ultimately not a particularly likeable character. Every time the very likeable actor behind him gets you siding with him, the man on screen does something reprehensible and you go right back to feeling conflicted. Maybe this conflict is the point of the film – that there is no easy right and wrong, that justice will always be flawed regardless of its application, and that ultimately there are no “good guys” or “bad guys” – but boy, does it make Kilpatrick hard to root for. Over the course of the film the former saintly pacifist commits atrocities right on par with those of the “bad guys.” We may feel he’s more justified in his actions, but ultimately it’s hard not to feel icky when your hero takes hostages himself, assaults another lawman, pistol whips uninvolved bystanders, or shoves an unarmed woman’s face under water to force information out of her. 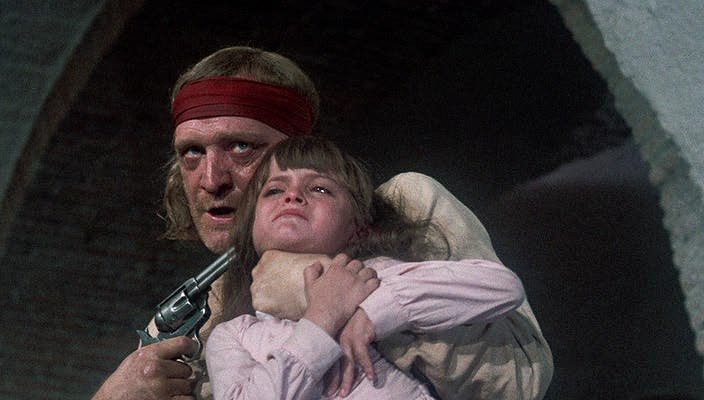 If half-drowning an innocent woman (and an icon of the Mexican cinema, no less) doesn’t seem like a particularly feminist gesture to you, you are correct – it sure isn’t. Let’s just say the film doesn’t quite pass the Bechdel Test: there are exactly two speaking female characters and they mostly function as examples of just how awful it must have been to be a woman living in those times. The film’s treatment of its non-white characters isn’t much better (though in fairness the times that the film depicts were pretty rough on actual women and non-white humans). Trackers frequently falls too easily into the casual stereotyping of the day, and its attempts to avoid those pitfalls – like the hyper-articulate African-American villain Jacob (Paul Benjamin) – somehow end up feeling even more insulting.

Despite some of the more stereotypical choices that were made for the character of Gutierrez, the Mexican Federale that provides a foil for Harris in his quest for justice, Italian-American actor Al Lettieri’s performance is one of the most likeable aspects of the film. His aggrieved, patient face as he deals with the irrational Harris and his tired resignation in the sad execution of his duties lend a warmth and humor to the film that it desperately needs. While Harris’ Kilpatrick is the protagonist, Gutierrez is the real hero of the film – even if ultimately he doesn’t come out unscathed by the brutalities of the justice system.

And then we have the baddies.

The film opens with a bank robbery being committed by a team of four villains, each drawn as uniquely as if this were a Dick Tracy strip. There’s the aforementioned Jacob, cold-hearted and well-dressed; there’s Choo-Choo (Neville Brand), so named because he has a piece of train track where one of his hands should be; Schoolboy (William Smith), the idiot man-child with burn scars across his face; and of course, their leader Frank Brand (Taylor) who is distinctive because he’s very bad. Very bad. All the time. Wearing the hat and coat of a Confederate cavalryman (though this is never addressed), Brand is as irredeemably evil as he could possibly be – right up until his brief humanization in the final real. Taylor was brought in after the restart to replace Hopkins and his wicked portrayal was unique in the Australian actor’s body of work. Usually confined to playing “the suave leading man or the indomitable hero” (according to Taylor), he clearly relished the opportunity to behave badly on screen for once – watch the hideous watermelon eating scene between him and the great character actor Neville Brand to see just how much relishing the two are capable of. Despite all the acts of violence that happen throughout The Deadly Trackers, what they do to that melon is the goriest scene in the entire movie. The bad guys we track may not be subtle, nuanced characters but they end up being one of the more fun aspects of the film (in a despicable kind of way). 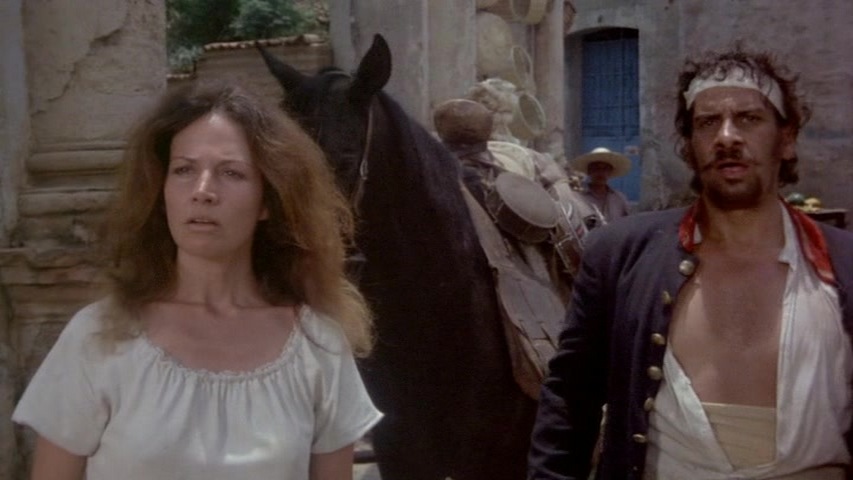 Ultimately The Deadly Trackers shoots for a bare-knuckled philosophical treatise about the impossibility of justice and winds up hitting more of a grindhouse horse movie. You like Harris, you like Lettieri, and you hate all the guys you’re supposed to hate, but ultimately there isn’t enough good in the characters on screen to fall in love with the film. What you’re left with is the patchwork of two different films that never quite coalesced into their own singular product. Maybe the story that typifies the production best is this:

One day the horse riding stunt specialist that was supposed to stand in for Harris, Taylor, and Lettieri (which is impressive range) was sick, so they were going to have to cancel shooting for the day. This would push pack the already struggling project and further tax the already strained budget, so as a solution the three headstrong actors informed the young director that they were all more than capable of doing their own riding stunts. It would be fine for one day of shooting – maybe even fun! What could go wrong? Well, it turns out that acting like a stunt man is not the same as actually being a stunt man and their experiment resulted in Harris ripping a sizeable chunk of flesh off his leg, Lettieri breaking his finger, and Taylor dislocating his shoulder. 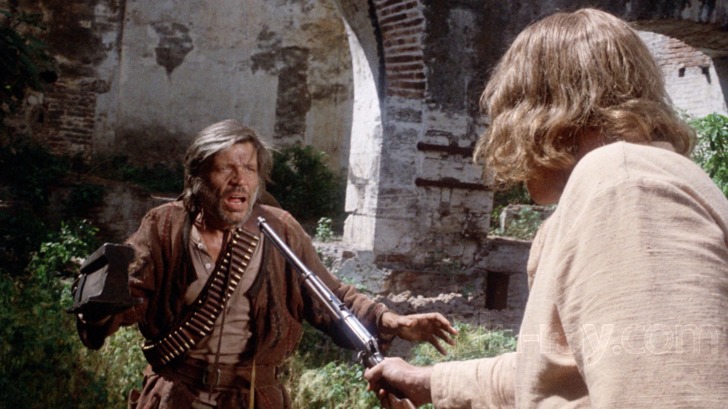 If actors hurting themselves due to a combination of their own hubris and a lack of on-set leadership isn’t a metaphor for this film then I don’t know what is. But hey – they also kept it compelling.

Rod Taylor in THE TWILIGHT ZONE

This week’s Retro Set is dedicated to the late Rod Taylor, who passed away yesterday at the age of 84. The dashing, handsome Australian actor is best known for his work in such classics as […]