Though Chuck Jones had a long and storied career at Warner Bros., first as an animator and then as the director of some of the most groundbreaking cartoons of all time, he almost didn’t stick around long enough to make his mark at the studio. The production of one particular 1942 animated short so irritated producer Leon Schlesinger that Jones, by his own account, came close to being fired for it. And what was so terrible about that single cartoon? Did Jones do something horribly egregious, such as animating Bugs Bunny and Elmer Fudd doing the mattress tango, or inserting a caricature of Schlesinger sitting on a toilet slinging a Nazi salute at viewers? No, what Jones did was much worse: he pushed the boundaries of animation, taking it to a level of modernization that was so far removed from what the big studios were doing that it was apparently just too damn frightening to behold. Imagine, all that fuss for one seemingly innocuous nine-minute cartoon, “The Dover Boys at Pimento University” or: “The Rivals of Roquefort Hall.”

The Dover Boys is a spot-on parody of the popular Rover Boys series of children’s books that were published from 1899 through 1926. The Rovers–Tom, Sam, and Dick–were mischievous cadets at a military boarding school whose adventures were immensely popular at the turn of the century, thus making them ripe for cutting satire a couple of decades later. In our animated version, gay nineties college bros Tom, Dick, and Larry, students at good ol’ P.U.–Pimento University–try to protect “their” fiancee (that must make things awkward at Thanksgiving), the must-corner-on-rails Dora Standpipe, from the amorous clutches of the evil Dan Backslide, with all of the melodramatic flourishes one might expect considering the source material (and all of the absurd touches one might also expect given the director of the short).

In an interview with Michael Barrier and Bill Spicer in 1969, Jones looked back on the creation of the cartoon that once got him into so much trouble with his bosses at Warner Bros. When asked how the studio received The Dover Boys, Jones replied, “Not very well,” continuing, “New York was shocked. I don’t think they would have released it at all except that they had to have a picture.” As it turned out, it was likely a combination of factors that ultimately ticked off Schlesinger: first, that the cartoon was populated solely by human characters, with nary an anthropomorphic animal to be found–an unusual move for a studio whose properties were dominated largely by talking rabbits, ducks, mice, pigs, and the like; and second, the limited animation itself, which was a jarring change from the typical Warner style–let alone the typical animation style of the period altogether.

The Dover Boys takes the notion of realism and sneers in its very face. This is largely due to the work of four artists: animators Robert “Bobe” Cannon and John McLeish (moonlighting from Disney in the wake of that studio’s strike; FYI, McLeish narrates the cartoon, as he did numerous cartoons for Disney over the years), layout artist John McGrew, and background painter Gene Fleury. The combination of McLeish’s exaggerated character designs, Cannon’s stylized movement of those characters (through the use of a kind of “smeared” animation technique, in which the characters pause in an exaggerated pose and then “smear” quickly into the next pose), and the deceptively simplistic, dreamy, airbrushed backgrounds composed by McGrew and Fleury, all brought together by Jones’s skilled guiding hand, resulted in a cartoon that was unlike anything anyone had ever really seen. And that, Jones recollected, was the real reason why Schlesinger hated every bit of The Dover Boys, because “[h]e hated any picture he’d never seen before.” 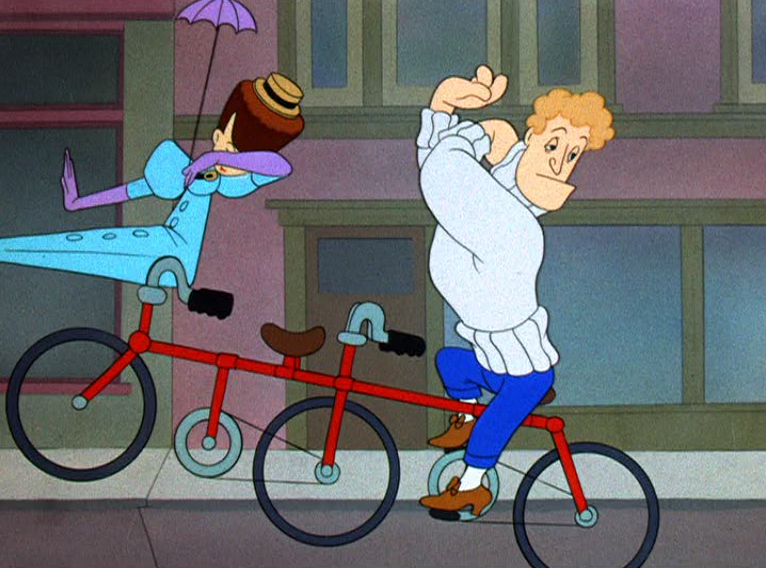 Schlesinger may have hated The Dover Boys, but the notoriously shortsighted producer was wrong yet again about this one, for there’s no denying its place in animation history as one of the most influential and important cartoons ever produced. Indeed, on the Jerry Beck-curated list of the 50 Greatest Cartoons of all time, The Dover Boys placed 49th, with contributor Milt Gray lauding it as “one of the most elegant examples of the principle that the less literal the character design, the more innovative the animation can be without losing believability.”

The Dover Boys was, as Jones acknowledged, an “experiment, but probably my only overt experiment.” Whether out of the need to protect his position at Warner Bros. or simply not feeling the appeal of the more stylized animation of the cartoon, Jones did not continue to play with the tantalizing possibilities promised by The Dover Boys. Instead, he left that up to other animators, including Cannon and early Dover Boys admirer John Hubley, who would become key figures in the founding of UPA, the innovative animation house of the late 1940s/50s that took cartooning to an entirely new level of artistry.

In 1930, Walt Disney gave his flagship character, Mickey Mouse, just what every anthropomorphic rodent needs: a canine companion named Pluto. But Pluto (or, as he was initially known, Pluto the Pup) didn’t start out […]

In 2013, Disney brought their flagship character, Mickey Mouse, roaring back to animated life in a series of cartoon shorts that air intermittently between programming on the Disney Channel. These stylized cartoons are at once […]