In a not too distant past, let’s say, 1987 – eons ago for some of you kids, Mickey Rourke was considered an “actor’s actor,” a hunk and an A-list celebrity. Things have sure changed in almost 30 years.

By the mid-eighties, Mickey Rourke was a cross-over sensation (he could do arthouse and mainstream without batting an eye, much like the legend of lore, Nicolas Cage) with box-office and critical hits like The Pope of Greenwich Village, Rumble Fish and Barfly to his credit. So when he was attached to a project that grappled with Catholicism, terrorism and the Irish Resistance, he was the tipping point for financing and distribution. He called the shots, making it difficult to smoothly transition the critically acclaimed novel A Prayer For the Dying into a film. The first director left with “creative differences,” so when Mike Hodges was offered the job, he said “yes,” before understanding the stipulations attached. Rourke had veto power over every department, and that included casting.

Because of his name, however, high caliber actors were interested in being a part of the project, and so Bob Hoskins, also an 80s (and 90s) A-lister and British legend Alan Bates attached themselves. The end result is an interesting if flawed hybrid of melodrama, noir and spiritualism that skirt the bigger issues in favor of Hollywood storytelling with a neat little bow. 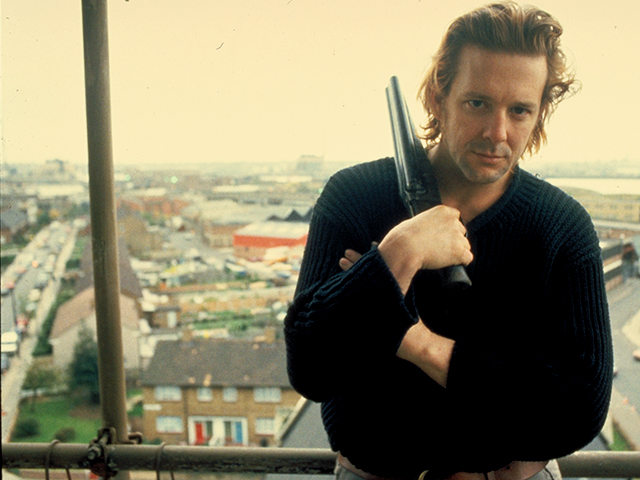 A Prayer for the Dying follows two IRA bombers who accidentally blow up a school bus of children in an attempt to cripple two British Troop transports. The two, Martin Fallon(Rourke) and a very svelte and youthful Liam Neeson as Liam Docherty, escape to London separately. Docherty has orders to bring Fallon back to Belfast and probably face execution within his own ranks as a scapegoat for the bombing, but Fallon has other plans. Unable to obtain a fake passport to get him out of the country, he agrees to do “one last hit” – for money, no less, and take out a mob boss. Fallon struggles, as this is a purely mercenary endeavor, but he’s up against it. His contract is manipulated by local gangster Jack Meehan (an oily, scene chewing Alan Bates), by day a mortician (!) and by night, a racketeer with gambling and prostitution as his métier. Fallon does the hit, shooting the rival gangster in a cemetery when a priest watches it all go down. The priest happens to be Bob Hoskins, and as usual, he steals the show.

Director Hodges has claimed that Hoskins was originally cast as the gangster, and Bates as the priest, and it was his idea to swap them out. Whether this is true, or just fun myth to play with in interviews, Hoskin’s unusual man of the cloth, just seething under the surface, has a great scene where some street bullies push him to beat the living hell out of them. 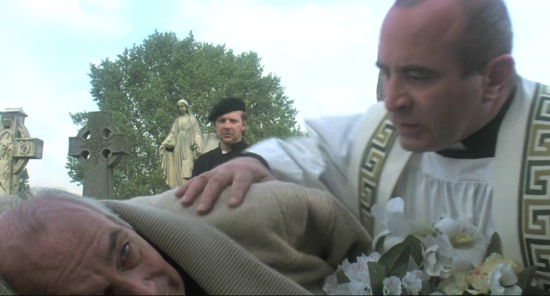 Hoskins Father Michael Da Costa is about to identify killer Fallon when the confused terrorist comes to Da Costa’s church and confesses to the murder. Now the priest is bound to keep Fallon’s confession secret. Here, the story becomes more akin to Hitchcock’s I Confess, which is taken from the priest’s point of view when a murderer confesses, and the priest is unable to reveal the killer’s identity.

Gangster Meehan won’t give Fallon his passport or money until Fallon does away with the priest as well, since he wants no witnesses. Now Fallon has to decide whether he can kill a priest. In order to amp the stakes up even more, Father Da Costa has a blind niece who plays the church organ.

The whole affair gets a little melodramatic, with Fallon finding a conscience in the arms of the innocent girl, and there’s a final church bell-tower scene with dynamite and a tied up Mickey Rourke that defies all logic.

Even with Alan Bates doing his most over-the-top, teeth-gnashing Simon Legree, an out of left field third act betrayal by Liam Neeson’s incredibly 80s looking hottie, and a method-style performance from Rourke doing his best Irish brogue (he supposedly trained for a year), there’s something very watchable about the whole affair. Twilight Time’s Blu-ray release is in the “as-expected” excellent condition, and with a surprising fertile set of extras that includes a great interview with Mike Hodges who can’t help but reveal how misguided the project was and his displeasure with the results.

Modestly budgeted and hardly successful, A Prayer for the Dying yet again reveals the mixed results that come from talent being given preferential treatment, at the expense of writing and direction. Making Rourke the main character feels misguided, as its Hoskins Priest who has the most difficult crisis of faith to deal with. Proving that I Confess made the stronger choice of featuring Montgomery Clift’s priest as the main protagonist, A Prayer for the Dying still offers up some well designed action set pieces, but ultimately is just a minor entry in the “full-to-busting” 80s thriller genre.