François Truffaut was never properly suited to film noir. His enthusiasms were too childish and his outlook too optimistic to ever be properly gloomy or cynical for that most nihilistic of genres. His male characters were too dreamy and romantic to feel the full weight of tragedy; his love of women too total to ever allow them to completely fall from grace. But he returned time and again to noir, almost as if he felt it his duty as a cinephile and disciple of the great Hollywood auteurs, especially his idol Alfred Hitchcock.

His most successful attempt was Shoot the Piano Player (1960), but perhaps his most notorious was The Bride Wore Black (1968), a film where a widow methodically murders five men who killer her husband on their wedding day. But its preoccupation with feminine revenge against men and its elaborate murder scenes do more to predict the rise of the rape-revenge sub-genre than reflect noir. Mississippi Mermaid—available in a new Blu-ray release from Twilight Time—returns Truffaut to the emotional, melodramatic side of noir.

Based on a novel by Cornell Woolrich, the crime writer who boasts more screenplays based on his work than any other crime novelist, it follows Louis Mahé (Jean-Paul Belmondo), a rich tobacco plantation owner on the island of Réunion, who sends away for a bride named Julie Roussel he met in the newspaper personals column. But the woman who arrives one day is not the same one in the picture. Played by Catherine Deneuve, this coy, detached woman so captivates Louis that he marries her anyway, ignoring how she doesn’t remember the content of any of their mail correspondences. Not just that, but he ignores letters from her sister demanding to know why she hasn’t contacted her since she left for Réunion. By the time he figures out something must be amiss, she has vanished along with nearly 28 million francs from his bank account. But in a strange twist, when Louis tracks down Julie—in actuality an imposter named Marion—instead of bringing her to justice he goes on the run with her. 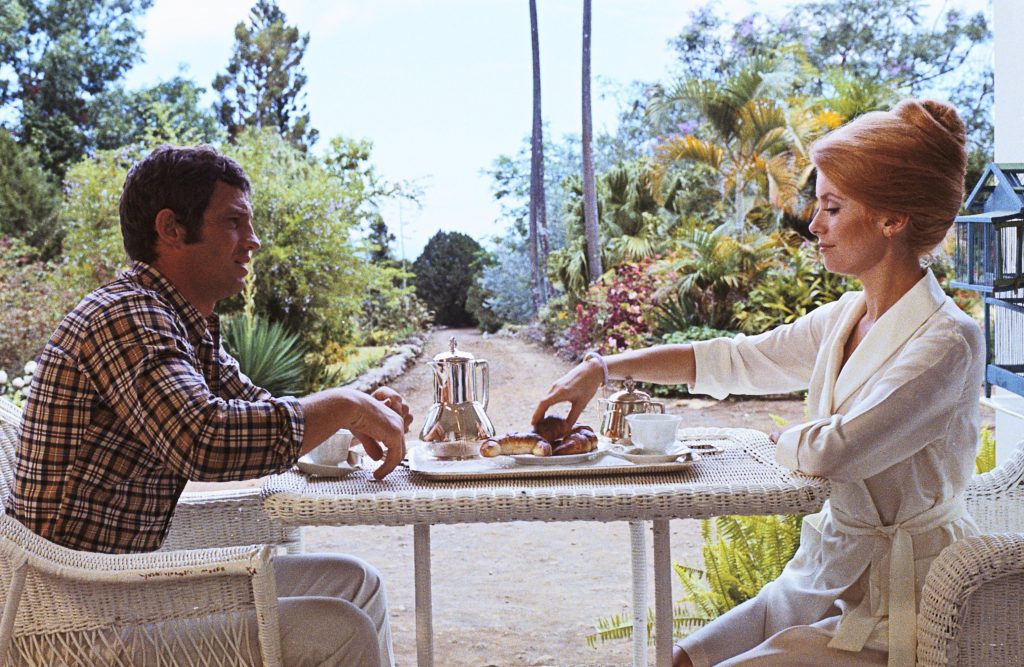 A typical film noir might have followed Comolli (Michel Bouquet), a private eye from Réunion hired by Louis to find Marion. But Truffaut focuses on the renegade couple, aligning Mississippi Mermaid more with Double Indemnity (1944) and They Live by Night (1949) than The Big Sleep (1946) or Out of the Past (1947). But Truffaut ultimately fumbles, tripping over his fixation with the rhythms of everyday life.

The film is both overlong (123 minutes) and padded, filled with superfluous scenes of his characters puttering around and talking that neither further the narrative nor develop tension and atmosphere. The brief spasms of overt stylization like Louis’ fevered nightmare when he discovers Marion’s deception seem out of place. Compare this to other French noir like Jean Renoir’s superlative Night at the Crossroads (1932)—Renoir compensated for his more leisurely pacing with a hypnagogic atmosphere and dream-like imagery like a dolled-up woman putting out her cigarettes on a live turtle shell.

What’s left is a tedious romance between a man inexplicably obsessed with a woman who hates him. As a drama the film fails because Truffaut never manages to elicit audience sympathy for such enigmatic characters. Like most of Truffaut’s other noir, Mississippi Mermaid is a weak imitation of the genre; not so much a celebration or homage, but a misguided counterfeit.

Blaze of Glory: Are We Too PC for BLAZING SADDLES?

By Kyle Turner Over the last couple of years, my friends have accused me of becoming more, shall we say, politically correct. Over dinner one night, my best friend told me, “You’re the most politically […]

The Spy Who Came Out of the Gold: Why I Hate GOLDFINGER

[dropcap size=small]H[/dropcap]e’s not allowed to play violent videogames,” my mother told them, my high school aged babysitters, as she left for work. The sound of an electro-revamping of John Barry’s James Bond theme managed to […]