In the late 80s, Phil Joanou was in line to be the “next big thing.” From USC and a dazzling student film, he caught the eye of none other than Steven Spielberg who tapped him to direct a couple episodes of his underrated TV anthology series Amazing Stories. With these obligatory 1980s style credits under his belt, Spielberg Exec Produced Joanou’s  first feature, Three O’Clock High, which was a John Hughes-style teen comedy (look for director Paul Feig in the blink if you miss it role of “Hall Monitor”). For a modestly budgeted high school fantasy romp, it did well and garnered semi-cult level status. This put Joanou on “the short list” to direct a rockumentary on the arguably greatest band of the 80s, U2. The film Rattle & Hum did all the business hoped for and more, and Joanou became a household name.

Then…um, well, something stalled. Word got around he was a little too precious and difficult to work with. Joanou has come out publicly to refute these allegations, and as usual, the truth lies somewhere in the middle. Down the line, he would direct Final Analysis and Heaven’s Prisoners (my personal favorite), but both would become locked in studio interference, legal brawling and grand standing by both sides, so the end results are dramatically different from what either party had hoped for.

Joanou has since become a hired gun, generally disappearing within the layers of the material he directs, which is most probably a good thing. You can catch his work on anything from TV series and MOWs, to once in a blue-moon actual theatrical releases like The Rock’s Gridiron Gang, or Chris Tucker’s 2015 concert film.

But right after Rattle & Hum, when he was at the precipice of making whatever he wanted, he took on State of Grace, an Irish mob story set in late 80s Hell’s Kitchen, starring hot young guns Sean Penn, Gary Oldman and for another layer of class, Ed Harris. It also features an achingly beautiful and young Robin Wright, long before she added a hyphenated “Penn” to her name. The film is most noteworthy for watching the young couple fall in love on and off set. 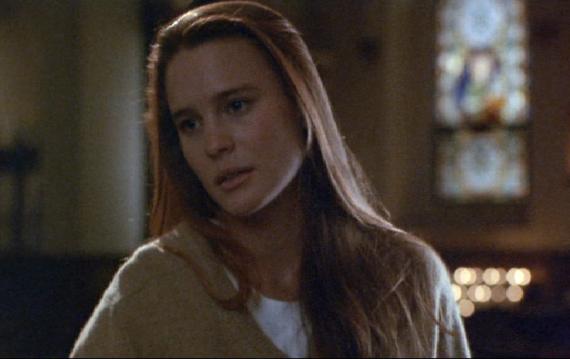 It should have been the real blast-off for Joanou’s career, but instead, it came and went in a heart-beat, with none of the marketing muscle the studio promised behind it, as well as an unfortunately scheduled release date, timed the same week as Scorsese’s seminal mob film Goodfellas. Recently released on Blu-ray by Twilight Time, Joanou himself has said the original DVD release in 2000 and this Blu-Ray edition has garnered the film more attention than its initial release and demanded critics take a second look.

Terry Noonan (Sean Penn) returns to the Irish neighborhood of Hell’s Kitchen, New York to restart his friendship with loose cannon and boyhood chum Jackie Flannery (Gary Oldman). These boys grew up in the Irish Mafia, now even more so for Jackie since his older brother Frankie (Ed Harris) wrested control of the gang. Harris has carved out a comfy side business playing Irish mobsters, from this to A History of Violence and the recent Run All Night, he’s always been able to pull off a combination of magnanimous good humor while barely containing a subsurface “evil,” in nuanced shadings. 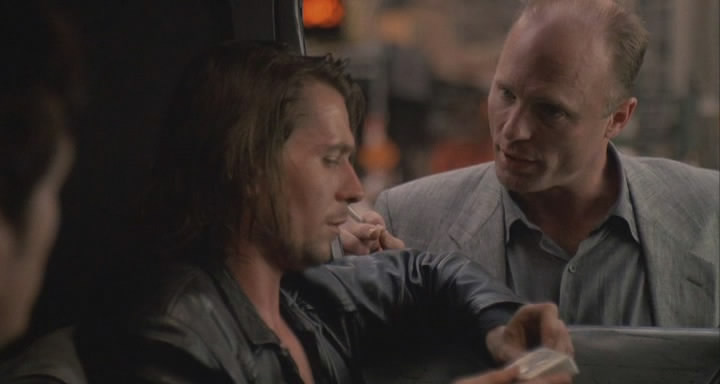 Penn’s Terry is very cagey about where he’s been over the last decade, but immediately falls in with Jackie, busting heads in bars and doing oddjobs for Frankie. When Frankie and Jackie’s sister, Kathleen shows up, its obvious she and Terry have history, and he’s eager to rekindle their romance, but she’s struggled to get out of Hell’s Kitchen, working as a concierge uptown in a high class hotel.

Tensions surface when the gang learns that Frank is cow-towing to the Italian mob so he can strategically amass power. Fiery Jackie has no patience for strategy, and ends up murdering three upper-level mobsters when they have a drink in his Irish bar. Now an all out war rages, and it’s up to Terry to decide where his alliances are, as he has a dark secret that he finally reveals to Kathleen.

That Terry has a secret from the start is no surprise, and the nature of his true identity, even for 1990, is neither earth shattering nor shocking. If anything, it’s the very expectation of crime noir. We’ve seen it for decades (The Departed and Goodfellas comes immediately to mind). But it takes so long for this revelation to surface that the viewer (at least this one) becomes bored by the standard plotting.

Joanou’s tone is uneven; he’s not sure whether he’s making a  70s cop film (Serpico, Prince of the City) or a ballet of violence a la John Woo. In some moments, Penn seems to purposely channel Robert DeNiro, and in others, Brando, Clift and anyone else he can parrot from The Actor’s studio.

It’s a treat to watch all these actors at work in their formative years, even John C. Reilly has a brief appearance that becomes the catalyst for most of the story, playing a none-too-bright friend of Terry and Jackie. And Ed Harris is riveting as always. But the material is too much “rinse and repeat,” with more than two scenes of Terry wrestling with internal demons, upsetting Kathleen, banging and begging outside her apartment door, and eventually tumbling naked through montages of “make-up sex.”

Jordan Cronenweth’s cinematography is gorgeous, and Twilight Time’s transfer exhibits a crispness and gritty framing in all its glory. Along with the strange mix of superior talent for this mid-level film is none other than Ennio Morricone, with an assured and competent score.

If you’re a Penn-Oldman-Harris completest, this is a worth the purchase, but for those not interested in a standard paint-by-numbers crime drama, your time is better spent elsewhere.

After memorable supporting roles in film classics such as The Great Escape and The Dirty Dozen, Charles Bronson was well on his way up to the top of the action movie game in the 1960’s. […]