Oh Clark Cable. I am writing this post about you and I hope fellow fans will read it so they know… My heart beats like a hammer and I DVR and I stammer every time I see you on TCM. I guess I’m just another fan of yours and I thought I’d write and tell ya’ll so…

I have loved Clark Gable all of my life. And boy oh boy, do I know how to pick ‘em. We don’t make men like him nowadays with his machismo and swagger and rumored halitosis. As a wee one, I didn’t quite know what charisma was, but I remember grinning ear to ear whenever he came onscreen grinning big ear to big ear. Whether his smile was at Claudette Colbert or Myrna Loy, with a slim mustache or not, in white tie and tails or in rancher gear, I just gravitated towards this slick-haired man with a twinkle in his eye. Even now, I can’t really analyze or describe Gable’s magnetism, but I can still picture the exact moment it hit me. And here it is below…

Yes, I know that Gone with the Wind isn’t part of today’s Clark Gable tribute on TCM and that it was part of Hattie McDaniel’s a few days ago, but I just had to mention it. If you’re a real fan (of anything or anyone, though you can’t do much better than Gable), you can remember the exact second it all clicked and that your life was never quite the same again. Mine was in elementary school with a beta copy of Gone With The Wind. Somehow, my pre-tween self had managed to withstand Rhett Butler’s somewhat leery glance up the banister at Scarlett O’Hara, but my shoulders went weak with this incredulous, slightly cockeyed look as he said “your passion for living.” I was gone: hook, line and sinker. Now, this may explain some things about my odd and unreachable expectations of men, but that’s for another post and being billed to another shrink.

Since then, I have held a ridiculous torch for this 52 year-dead Ohio-born King of Hollywood alongside millions. When classmates called Leonardo DiCaprio the King of Hollywood after Titanic but before The Beach, I defended Gable’s title to the death (or the schoolyard equivalent of not-so-nice taunts). When AFI placed him in seventh on their list of the greatest male actors of all time, I nearly shot through the roof and wrote AFI a stern letter, but then remembered a nine year-old girl probably wouldn’t hold much sway. Even now, whenever I need a pick-me-up, I know a Clark Gable movie will be the perfect remedy for almost anything that ails me.

Boy troubles? Gone With the Wind. Rhett too much for you but you want to keep the Southern charm? (Seriously?) Band of Angels. Friend issues? Boom Town or San Francisco. Stressed out? It Happened One Night. Not so great teacher/boss? Mutiny on the Bounty. Feeling cheated? Honky Tonk. Needing cheese? Teacher’s Pet or It Happened In Naples. Men being men? The Tall Men. Naughty Pre-code? Possessed. Slightly less naughty Pre-code? No Man of Her Own. Bittersweet Americana? The Misfits. Feeling Un-American? Comrade X. Caught up on Mad Men? The Hucksters. Want to watch the same thing twice? Red Dust and Mogambo. An onscreen and offscreen love affair? The Call of the Wild. Gable being villainous? Night Nurse. Gable singing and dancing? Idiot’s Delight. Are you sick (or have some other excuse not to move for hours)? Marathon—even blindfolded, you can’t go wrong if they’re all Gable. (This list could have gone on and on. Get ready for my upcoming release, Clark Gable Solves Everything (Within Reason).) Luckily for all of us (unluckily for our DVR space), TCM shows Gable movies regularly and today, we’ve hit the jackpot. 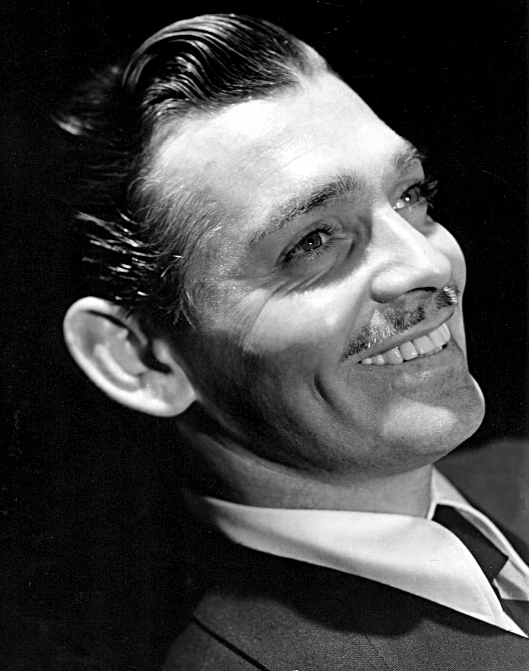 For today’s Clark Gable tribute as part of Summer Under The Stars, the powers that be over at TCM have made a fine selection of 13 films: Dance, Fools, Dance, Laughing Sinners, Possessed, Chained, Cain and Mabel, Test Pilot, Mutiny on the Bounty, Mogambo, It Happened One Night, Too Hot to Handle, Strange Cargo, The Hucksters, and Betrayed. So we’ve got five Clark Gable-Joan Crawford dramas (four of which were filmed while their on-again off-again offscreen affair was going hot-and-heavy), a romantic comedy with Marion Davies (another one of Gable’s rumored offscreen lady loves), an airplane drama revolving around a love triangle featuring Gable with Spencer Tracy and Myrna Loy, a naval drama in which Gable overthrows a puffed-up Charles Laughton, a romantic drama set on African safari with Gable caught between Grace Kelly and Ava Gardner, an Oscar-winning screwball comedy starring Gable and Claudette Colbert, an adventure comedy with Gable and Loy as rival photojournalists, a business drama with Gable as a 1940s Don Draper, and a spy thriller revolving around a love triangle featuring Gable with Lana Turner and Victor Mature. Seriously, how am I supposed to function today? Friends, if I’m not tweeting, posting or something, please send help as I’m probably convulsing on the floor due to Gable overload.

If you’re looking for an in-depth biography, I’d recommend reading Warren G. Harris’ Clark Gable: A Biography. If you’d like to kill some time browsing Gable trivia and anecdotes, head over to dearmrgable.com. If you want a brief biography, check out page 2 of the Clark Gable TCM Summer Under The Stars page. If that and/or his Wikipedia page are too long, keep reading.

William Clark Gable was born on February 1, 1901 in Cadiz, Ohio. The son of an oil-well driller and his wife, Clark’s father discouraged his son’s interest in acting. After coming into some money, a twenty-something Gable pursued this passion and worked his way through a few stock theater companies. Thanks to his first wife, theater manager Josephine Dillon, Gable got his teeth fixed, hair slicked and to Hollywood. Thanks to his second wife socialite Ria Langham, Gable learned a bit more about social graces and struck gold at MGM. In 1934, Gable won his only Oscar, the Academy Award for Best Actor for his work in It Happened One Night. That very same year, he had an offscreen love affair with The Call of the Wild costar Loretta Young, which resulted in an illegitimate daughter who Young “adopted.” In 1937, Clark Gable was voted “The King of Hollywood” in the New York Daily News and the title stuck. While still married, Gable went on to fall in love with Carole Lombard, a relationship that was dubbed the “romance of the century.” After securing a second divorce, the two were married on March 29, 1939. Calling each other by the nicknames “Ma” and “Pa,” the duo was considered one of the happiest couples in Hollywood. Tragically, it would only be three years later that Carole would perish alongside her mother and a MGM publicity man in a plane crash coming home from a war bonds sales drive. Distraught, Gable enlisted in the air force as a bomber aerial gunner. Back from war, Gable was never quite the same, though he did remarry twice: Lady Sylvia Ashley (Douglas Fairbanks’ widow) in 1949 and Kay Williams (mother of his only son) in 1955. Shortly after wrapping up filming on The Misfits, Gable suffered a severe heart attack and died ten days later at Hollywood Presbyterian Hospital on November 16, 1960 at the age of 59.

The moral of the story is… Why are you reading about Clark Gable when you could be watching him this very second? That is a question I ask myself near daily and just realized how creepy that reads. I swear my voyeuristic tendencies only apply to mustachioed matinee idols of the 30s, 40s, and 50s… Go, shoo, turn on TCM this very second. You and that upcoming grin on your face will thank me.

“I don’t care what happens; let the whole world stop, as far as I’m concerned you’ll always be the top ’cause you know you made me love you.”

About Diana Drumm 11 Articles
Diana Drumm is a freelance writer and editor based outside of Baltimore, Maryland. Along with The Black Maria, she writes for The Playlist and Sound on Sight. A graduate of Phillips Exeter Academy and the University of St Andrews, her “expertise” includes British Cinema and Classic Hollywood. She was fortunate enough to meet and interview Robert Osborne and Ben Mankiewicz, albeit blushing and clumsily throughout, at the 2013 TCM Classic Film Festival. Follow Diana on Twitter at @DianaDDrumm.
Website

Alright, Jill. You can do this. DEEP BREATH. It’s Gregory Peck day on Turner Classic Movies and like any normal, well-adjusted individual, I’ve been digging through online image archives for sexy photos of the man. Don’t […]