B Roll is a weekly column that digs into the deeper cuts and lesser-known films from legendary directors–the good, the bad, and the awesome. This week, Our Nathanael Hood.

“I was afraid I was going to die. Now I’m afraid I’m gonna live.”

A single bullet snaps the spine and all goes dark. If the soldier is lucky enough to re-awaken, he faces a lifetime of paraplegia. But beyond permanent paralyzation lurks greater horrors: demasculinization, the loss of independence, and the promise of never-ending public pity. These internal struggles frequently weigh on the minds of paraplegic veterans more than their disabilities ever will. This truth propels Fred Zinnemann’s The Men, a drama about an infantry lieutenant trying to rebuild his life after being crippled in a fire-fight, and elevates it beyond the shackles of inspirational movie tepidness. 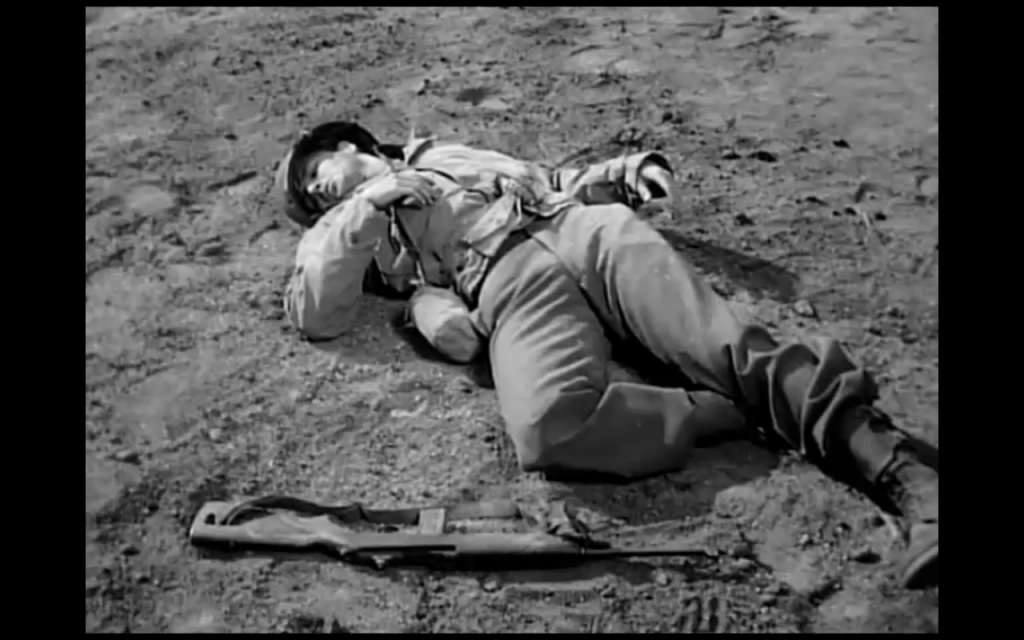 After his injury, Lieutenant Ken (Marlon Brando) initially refuses all attempts of physical rehabilitation. Spurning his doctors, he wastes away in his dark hospital bedroom, rejecting the advances of his devoted fiancée Ellen (Teresa Wright) and the efforts of the beleaguered yet determined Dr. Brock (Everett Sloane). Only after Dr. Brock forcibly relocates Ken to an open ward, and after suffering the taunts of his fellow patients, does Ken begin his rehabilitation. But no matter how much he struggles to repair his body, his ego seems permanently smashed. His insecurities reach a boiling point when he finally marries Ellen. Convinced that he will prove insufficient as both lover, husband, bread-winner, and father, Ken flings himself into the bottom of a bottle and the front of his car into a tree. But still Ellen and Dr. Brock refuse to capitulate to Ken’s fatalism. 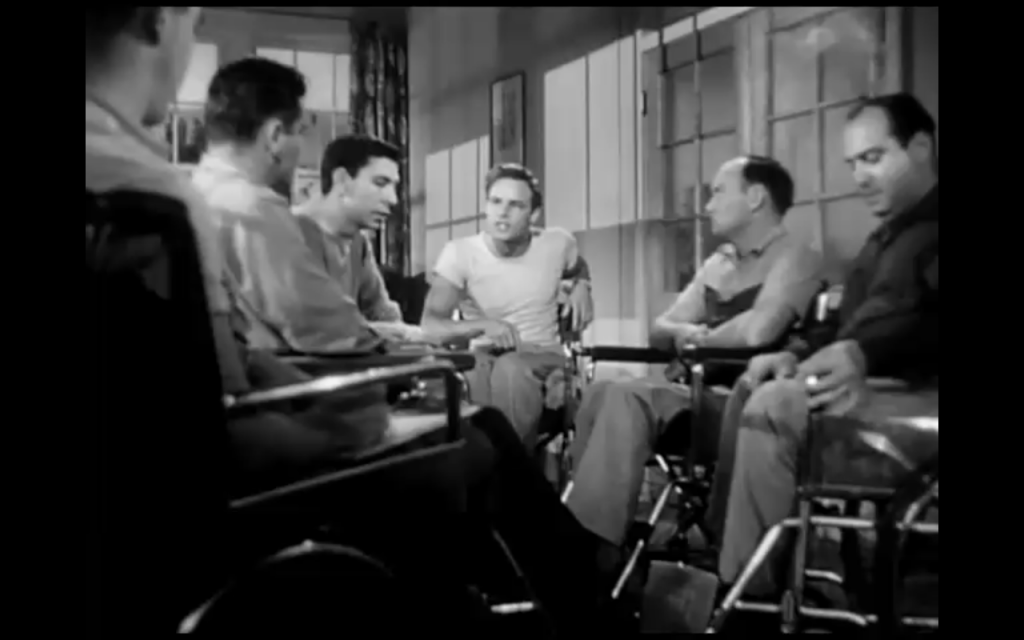 The Men represents a rare cinematic syzygy of three of Hollywood’s greatest talents. Producer Stanley Kramer was on the cusp of establishing himself as America’s cinematic conscience; his own directorial career would take wing a few years later with such prominent message films as The Defiant Ones (1958), Judgment at Nuremburg (1961), and Guess Who’s Coming to Dinner (1967). Without Kramer’s independent producing, it seems unlikely that such a raw, unflinching film about post-war casualty rehabilitation as The Men could have been made. 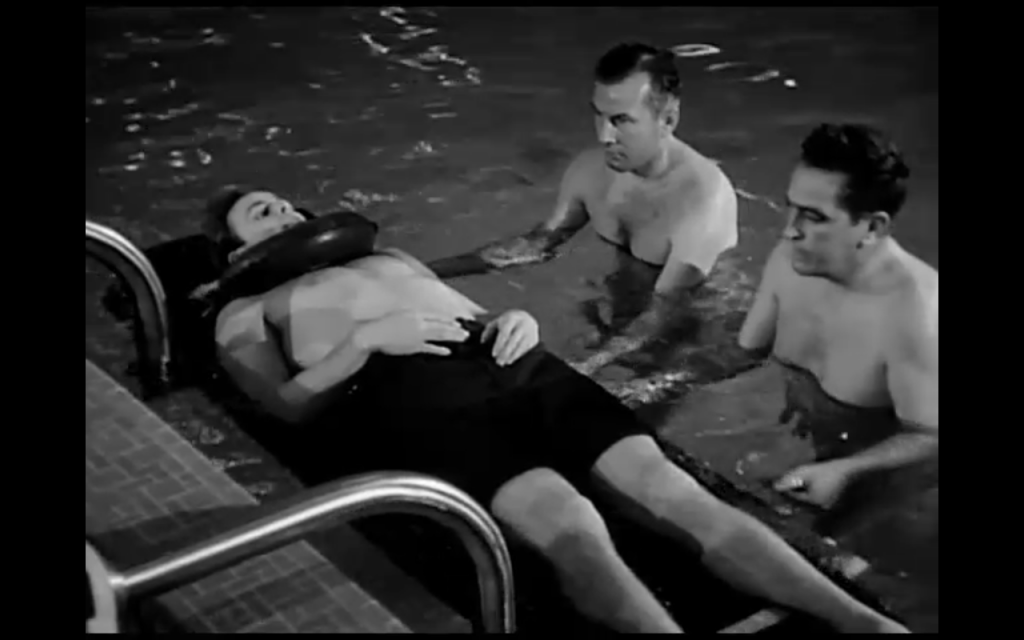 Director Zinnemann used his panache for cinematic realism (picked up largely through his early apprenticeship under famed documentarian Robert Flaherty) to great effect, shooting much of the film in an authentic veteran hospital and casting forty-five real-life patients.

Zinnemann displays a sincere fascination for the mechanics of rehabilitation: multiple montages depict the painful (and tedious) exercises Ken must undergo; various methods of paraplegic locomotion are demonstrated; the director even works in a clever way to dump exposition about the medical causes, symptoms, and treatments for paraplegia in the opening scenes when Dr. Brock addresses a gathering of his patients’ family members.

But most crucially, Zinnemann brings his trademark skepticism to traditional happy endings. He understood that the healing of the body pales in comparison to the healing of the mind—The Men doesn’t end with a miracle, but with Ken’s resolving that maybe he can adjust to his new life as a cripple. The ultimate triumph isn’t physical, it’s mental; it isn’t of Ken making peace with the world, it’s of Ken making peace with himself.

The final piece of The Men’s great cosmic alignment was none other than Marlon Brando. After achieving Broadway stardom, Brando made his feature film debut as Lieutenant Ken. Characteristically, his preparation for the role was rigorous: he lived in a paraplegic ward at Birmingham Army Hospital Van Nuys, Los Angeles, California for a month (which he spent restricted to a wheelchair); underwent actual therapy; and spent time socializing with authentic paraplegics. The resulting performance was gripping in its ferocity, stunning critics and proving Brando’s potential for transitioning from the stage to the screen.

The key to Brando’s success? An obsession with finding the reality in his role—much in the same way that Kramer and Zinnemann sought the reality in their story.

The Men is available on DVD/Blu-ray through Amazon and for instant streaming on Amazon Prime.

Sidney Lumet’s FAIL SAFE Is Anything But