We love Warner Archive Instant and so should you! This week our Must Watch Warner Archive picks has our Creative Director Wade Sheeler fan-boying on Tiki culture with Honolulu (1939), Senior Editor Jill Blake swooning over dapper William Powell in Jewel Robbery (1932) and Senior Editor Carley Johnson singing praises to Kay Francis in In Name Only (1939). 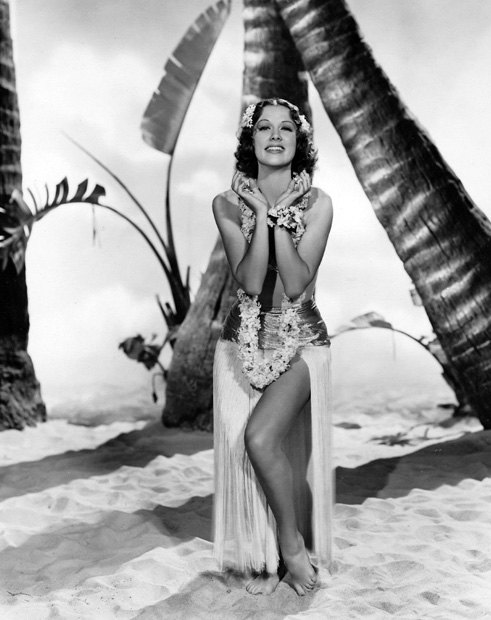 If you know anything about me, you know I’m all about Hawaii and Tiki Culture. Just like tracing the roots of Film Noir and its timeline has become an obsession and fascination for some film fanatics (me included), I like to try and pick up the disparate pieces of Tiki culture and place them into some kind of chronological context. Tiki culture, (drinks and “Aloha” wear and lounge accoutrements) is currently seeing an explosive resurgence, and while some may think that Tiki encapsulates everything Hawaiian, it does not. Still and all, seeing its earliest Hollywood permutations, prior to World War II and identifying the elements that would later play a part in the greater body of style and fashion that were definitively “Tiki” is always a lot of fun, and the Eleanor Powell musical Honolulu is definitely a great touchstone of South Seas fetishism and objectification that would later become the heart of this mid-century movement.

Honolulu is not a good film or even a good musical. But it has two incredible dance numbers featuring athletically stellar Powell, buried amidst a cornball, worn-out plot of doppelgangers (both Robert Young) swapping places, The Prince & The Pauper style, to see what life is like on the other side. One is Brooks Mason, a movie idol who can’t go anywhere without fangirls ripping his clothes off (easily 2 years before the same would happen to a young crooner from Hoboken, New Jersey) and the other is wealthy Hawaiian plantation owner George Smith who yearns for some Hollywood-style excitement and glamour. Once the two switch places, they learn the valuable lesson that the grass is not always greener.

The film also features the last movie appearance of George Burns and Gracie Allen as Burns and Allen (although they don’t appear together except for one routine) before they would focus more on their radio and later television career. Gracie plays Eleanor Powell’s best friend, and George is Brooks Mason’s agent.

It takes far too long for the “Hawaiiana” scenes and tropical locations to hit, but once they do, the design, the costuming and those ubiquitous slack and steel guitars make up for it, lulling the viewer into that dreamy 1930s movie version of the South Seas that we’ve all grown to love; beaches, tradewind blown palm trees and ukulele strumming honeys.

Scrubbing through the film may be a mandate since there are some less than enjoyable moments, specifically a horrible blackface routine. Powell was not a stellar actress and was usually surrounded by stronger performers and comedians, but it’s her dancing you’re here for, and you will not be disappointed. She really was a breathless marvel to behold; and her big finale, wearing a hula skirt and lei, strumming her uke while tap dancing in some “seen to be believe” clompy dance shoes is amazing. Watch out also for an amazing acrobatic number where Powell flips and jump ropes non-stop across a cruise ship deck. Not a great film but definitely worth the while if you like to dig a little for your buried treasures. Have a Mai Tai, relax and enjoy the simple pleasures of Honolulu. Alooooooooha! 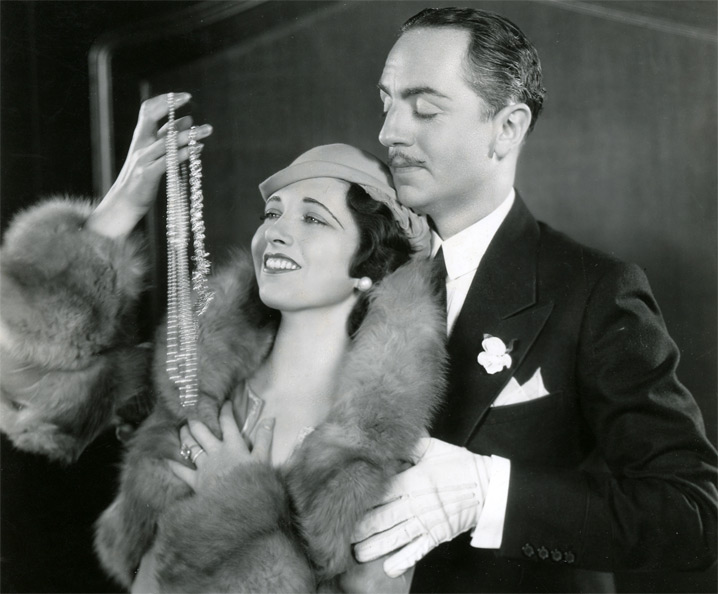 Did anyone play the wealthy, jewelry-obsessed, sexually frustrated socialite better than Kay Francis? I don’t think so. Francis cornered the market on this take of the high class society dame, adding a touch of sophistication to the racy films of the pre-code era. In William Dieterle’s Jewel Robbery (1932), Francis proves that a woman can get what she wants, like gaudy diamonds and extramarital bedroom romps, without sacrificing one shred of dignity.

Kay Francis is a Viennese baroness (look, it’s Hollywood. Just go with it) who loves expensive jewelry as much as she loves sex. Matter of fact, she often gets more satisfaction from jewelry than her wealthy husband or her various lovers. The baroness and her husband visit the finest jeweler in Vienna to purchase a very large, very expensive diamond ring. During their shopping trip, a dapper jewel robber (William Powell. Who else?!) and his well-attired gang swoop in to relieve the jeweler and his customers of their gemological possessions. The robber is calm, suave, extremely confident in his thieving tactics. His behavior and good looks (it’s all in the manicured ‘stache) catches the eye of the baroness. Never before has she met a man who is sexually attractive and loves jewelry as much as she does. It’s a sapphire-encrusted match made in heaven. And the baroness must have him.

Jewel Robbery has everything a great pre-code should have: bare legs, low-cut dresses, sexual promiscuity, racy dialogue, and consequence-free marijuana use. Seriously, a jewel robber who has his victims toke up to guarantee his clean getaway? Badass. 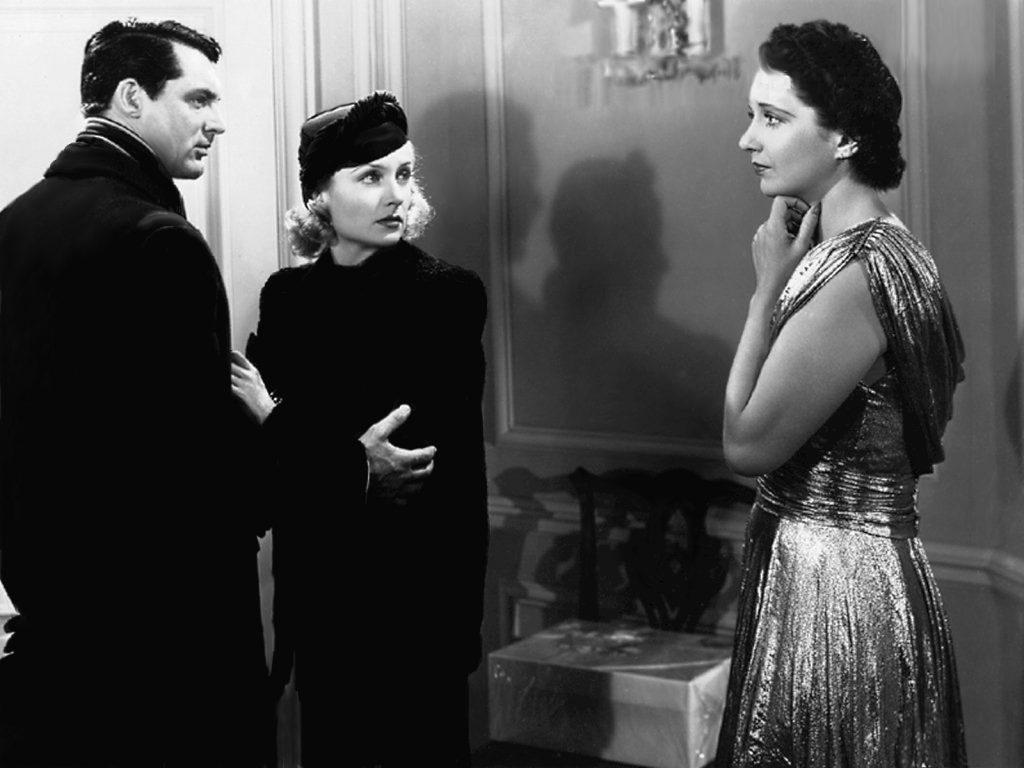 On paper, In Name Only sounds like a winner. Cary Grant, Carole Lombard, Kay Francis? Check. Directed by the dependable studio stalwart John Cromwell? Check. Made during that fabled year of 1939? Check. But there is something strangely lackluster in this tale of star-crossed love.

Cary Grant plays, as per usual, a handsome aristocrat (seriously, does anyone ever know what Cary Grant does for a living in the movies?) but instead of winning him a sparkling sparring partner a la Irene Dunne, the curse of being an Olympus god with a Rockefeller checkbook wins him a passionless marriage. His ice queen wife (Kay Francis) married him for his money and position, and intends to hold on to her meal ticket at all costs, doing an admirable job of coming across to society, and Grant’s family, as the perfect wife.  Fate intervenes when Grant happens into the company of Carole Lombard—a blithe, breezy blonde (and a single working mother) who connects with Grant on an emotional level that he’s been starved of for years. They fall quickly and irrevocably in love, but (naively) don’t quite wager on Francis being a complete troll. Not only does she refuse a divorce, she very cleverly checkmates Grant and Lombard at every opportunity, anticipating their every move and masterfully dismantling all hope of happiness.  The ace up her sleeve is the love and devotion of her in-laws, who loyally side with her as the wronged wife, completely unware of her deceptive manipulation of the situation. Long story short, Grant pulls a Camille: he gets deathly ill with pneumonia, loses the will to live, and only the assurance of his parent’s acceptance of his love for Lombard will rescue him from the valley of the shadow of death.

I’m all for a good weepy melodrama, but even for this hopeless romantic In Name Only is a bit too heavy-handed for its own good.

What does work about the film, however? Miss Kay Francis. I mean wow. Her portrayal of the calculating bitch is so natural it’s almost scary. You can feel the ice water in her veins every time those big, dark eyes of hers focus on the camera. She’s the strongest person in the film, and it’s almost as though Grant and Lombard know it because they absolutely pale into the background every time her regal figure sweeps into the frame. Which is saying a lot. You may watch In Name Only for Grant and Lombard, but make no mistake: this is Kay Francis’ picture.

In the mid-1930s, the screwball comedy was still a relatively new subgenre of film. Many critics label It Happened One Night, released in 1934, as the first “screwball” picture ever produced, and subsequent films such as Twentieth Century (also […]